I'm very proud to say that most of my books are available as audiobooks.  I can't say I'm proud of ALL my books that have been produced in audio. 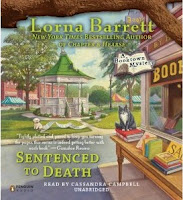 My first experience with audiobooks was a joy.  Penguin Audio hired the perfect narrator, Cassandra Campbell, and her performance of the first five Booktown Mysteries was nearly flawless.  I listened, and enjoyed, every one of them.  Her performance brought the characters to life. Authors "hear" how their characters sound in their heads while writing, and she nailed mine--particularly Angelica. (My favorite of the books she narrated was Sentenced To Death.)

The producers contacted me to ask for pronunciations and other tidbits, and they paid attention to such things as giving one character the English accent she spoke with. 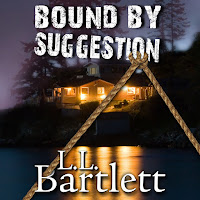 My next experience wasn't quite as happy.  That's when I went through nearly 30 auditions to hire someone to perform the first three Jeff Resnick Mysteries.  The voice was perfect.  Sadly, the experience was flawed.  So much so, that after the third book, I decided I needed to find a new voice for Jeff.  Another 27 auditions later, I found my new Jeff in Steven Barnett.

Steven is a consummate professional. I don't have to read the manuscript word-for-word as I listen to his performance.  He knows when he screws up, and he fixes any glitches before I even hear his work. So far we've worked on five projects with at least two more in the works for this summer.  I hope to have Steven read the first three Jeff Resnick books in the not-too-distant future, too. (My favorite of the books he narrated is Bound By Suggestion.  OMG--I couldn't believe I wrote the book, it was such a roller coaster ride, thanks to Steven's performance.) 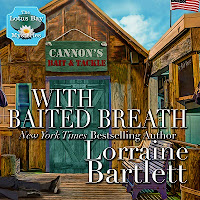 It took me four months to find my next narrator, Heather Masters.  Heather reads With Baited Breath, the first Lotus Bay mystery.  I slogged (and that's the word) through 36 auditions.  You can't imagine how tedious it is to hear the same passage being read over and over again, and then comparing reader A with B, C, D, E and F.  And EVERYBODY sounded alike.  The very first woman who auditioned was the best. I compared her to everybody else.  Unfortunately, her circumstances changed and she wasn't able to read the book.  That's when I found Heather, who did a wonderful job. 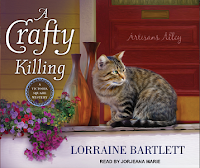 I must admit, since I didn't own the audio rights to the Victoria Square Mysteries, I nagged my editor about using those rights or RETURNING THEM TO ME.  That doesn't happen in publishing.  It took three years, but finally the books are available in audio.  They're not too bad.  I've listened to them all.  The narrator sounds like she has a cold, and she reads Katie with a kind of simpering voice, but she really nails the male characters, which is difficult for women readers.  I would listen to those books again.

I wish I could say that about Booktown Mysteries 6, 7, 8 and 9 produced by Tantor Media.  As soon as I heard the audio sample up on their website, I knew the narrator WAS ALL WRONG for my books.  Unfortunately, authors have no control over such things. 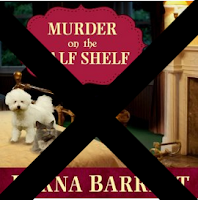 I listened (or should say I BEGAN to listen) to Murder On The Half Shelf during my rides to and from the hospice home where my mother went to die.  I was on the road more than an hour a day, and audiobooks were a welcome distraction.  Well, not THIS one.  Not only did the narrator make every character sound unpleasant, she reads as though she feels nothing but disdain for the material.  Not only that, but she continually calls Angelica ANGELA.  That's just sloppy work.  Even worse, nobody caught it.  I reported it to my editor, who was as appalled as me, but nothing was done about it.

I couldn't even finish listening to the book, and I'm sure as heck not going to waste 8 hours a pop listening to the others.  Therefore, I can't in good conscience promote any of those books.

So, audio has had it's highs and lows for me.

Who are some of your favorite audio narrators?

Posted by Lorraine Bartlett at 7:09 AM

I just cannot get into listening to books. I know lots of people use them because they can't see or because they commute or for a myriad of other reasons, but they put me to sleep. And I like the feel of books so don't use my Kindle as often as I could since it is fully loaded. Cordella

Sorry to say, I don't listen to books. I would be doing things around the house and not listening. I can't even tell you what is playing on the radio if I am working around. I guess some people would listen while driving but that might distract me from my driving. At my age I need all the concentration I can muster. I love just sitting and reading. Then I can see the people and concentrate on them. I'm sure audio books are a wonderful things for the blind and others but they are not for me. It's the same with movies made from books. The people never look like I think they do in the book. If I read the book, I won't see the movie. If I see the movie, I might read the book but what's the point, if I know how it will end. Am I the only one who thinks like this?

I love audiobooks. I've been painting my porch (for HOURS on end) and it's so neat to be listening to a story while I work. It made the time go by really fast. Same with listening while I drive. Listening to the radio drives me batty with all those commercials. Some of the audio CDs are up to 80 minutes long and so I don't have to change them as often, either. Steven Barnett has read a couple of my short stories, and I have them on separate CDs so I can listen to a short one in the kitchen when I'm making my morning juice or folding laundry. They're just the right length.

Lorraine, perhaps I should try an audiobook while driving. I just might want to drive around more to listen to the story. I sometimes have to push myself to give something a try. Getting old I guess. LOL I know I hate the music on the radio now but somehow I never seem to put in a disk to listen to, and I have a lot of them in the car.. I do have an oldies station I put on most times.

How did I miss this terrific post!! Love COLD CASE and Steven Barnett is wonderful, you are so right. He does a wonderful job.

I absolutely love audio books. I just don't have time to read these days, but I can listen to audio books almost every day. I especially enjoy them when driving - it can make a long commute seem much shorter. Plus, when I'm cooking or doing things where I stay in one place, it makes the time go by faster. I didn't have a problem with the narrator of the Booktown series. I have all of them through Audible, as well as all of the Jeff Resnick books in audio (with both narrators). I've just started on the Victoria Square audios. It took me a bit to get used to her reading of Katie, as it seemed so...unemotional, I guess would be the word. But as the first book went on, I got used to her style and I will get the additional books in the series. I currently have over 80 books through Audible and hope to continue to build my library. Besides the convenience of audio books, there is also the issue that my sight is failing and I hope to have as many audio books available in the event that I can no longer read printed books (I currently have to read on Kindle or a PC so I can increase the font), so I hope that you will continue to make your books available in audio.

Agree, Cassandra Campbell is terrific. I want to be her when I grow up! Also LOVE Jim Dale, the (U.S.)Harry Potter narrator

And as a narrator, Lorraine, I feel your pain. I know I can do a better job if the author has more input---regional pronunciations, did-you-want-this-line-to-sound-sarcastic, etc. It's frustrating working with publishers & other rightsholders, because this isn't their baby, you know? It's a GREAT feeling when I get a message from the author saying, "That's EXACTLY what the character sounded like in my head!" (...realizing, of course, that for every author who says that, there are six to ten who say, "meh...NEXT.")

Great topic!(but then I WOULD say that)