Oh sure, they’re cheerful and yellow and kind of cute.  Leave them alone and they’ll turn into adorable puffballs that children like to blow into the air – launching a few thousand baby dandelions to the new homes!   How much fun is that?


Right now an army of dandelions has massed on the lawns in our neighborhood, a result of lots of sun and warm temperatures.


From the look of them, one more day and they’ll be kicking the door and moving into the house. A quick search on the you know what reveals that the word dandelions comes from the old French: dent de lion or lion’s tooth. I can see that. They have the kind of fierce aggression you might expect from the king of the jungle.  I could be kinder to them if I didn’t know that they destroy our (already pathetic) grass.

Anyone who’s ever done battle with them knows that there’s not much point in just taking off the tops. I’d like to say that the fun ends when you’re bent over digging out dandelions by the roots.
We’re not inclined to want to use a lot of weed killer because we’re on a well, plus our little pooches mooch around on the lawn (or what’s left of it) and, of course, there’s the duck family too.


This snazzy tool is my new best friend. If only I could figure out how it works.  Grrr. 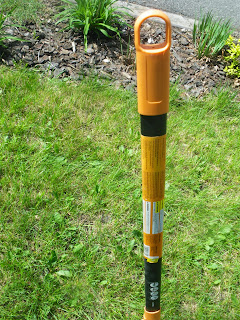 So dig it is. I filled two giant yard waste bags today. Do I dare add them to the compost or will they use that as a staging ground for the next battle? In fact, I am now wondering if there are even more you-know-whats matching across the lawn than there were when I started.

I’ve just read that boiling water, corn gluten meal, vinegar and mulch are all good weapons in the fight against the dandelion army. I’ll be trying them all.

In our last home in the city, we didn’t have a single blade of grass, just flowers and pine mulch. Of course, we had a few dandelions too.  We could manage.

When we bought this house it had a large back yard and a reasonable front yard, both entirely ‘grass’ (meaning mostly weeds), ten rogue hostas and nothing else. 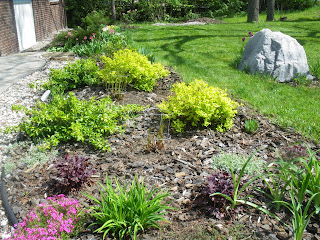 We’ve been busy with perennial beds and paths and trying to maintain the so-called lawn until we come up with a next steps plan. So far our plan here is to eliminate as much of the grass (it’s hard to think of it as a lawn) as possible in the next couple of years, substituting pea gravel, mulched flower beds and ground covers like periwinkle and lily of the valley.  Unfortunately, we'll be mowing until the project moves to the next step. 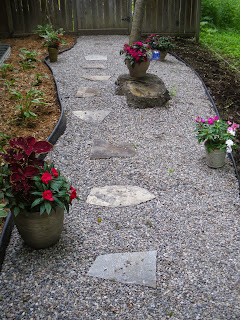 We’re working towards a low maintenance and drought tolerant environment. Of course, it will be nice to have a small bit of grass (or clover) for children to play on and adults to wiggle their toes in every now and then, something that can be maintained in about fifteen minutes.

You’ve probably figured out that we’re a long way from our dream. Until then, my battle continues.  Hands in the air, Lion’s Tooth. I’m coming for you!

So my friends, let’s hear from you. Are you pro or anti-grass?  What about dandelions? Tips or tales?  Let the conversation begun.
Posted by Mary Jane Maffini at 1:00 AM

I will gladly swap you your dandelions for my oxalis. I have one variety, from my late godmother which is very pretty, non invasive, and I am happy for it to mooch about the garden, but those other ones, are lush, and everywhere. For every bulblet I pull out, there must be 6,784 others waiting to take its place.
And like yourself we have dogs and the 2 cats so that rules out pesticides.

We have almost 2 acres and 10 years ago we maybe had 10 little dandelions now it's like a carpet of yellow. I've told my husband he can flagstone the whole two acres and we'll enjoy potted plants but somehow spending more doing that than we would spend on 3 homes didn't sound reasonable to him. Does to me.

Up until reading this, I liked oxalis, Bernie. Now I'll be careful not to include them in my plans for spreaders! I don't think they are a problem in our part of Ontario - but I'll check it out. Thanks for coming by!

LOL, I love the flagstone idea! We did some flag work ourselves (just a path) and it's no more backbreaking than the dandelions (Pricey though! He's right about that part)

Dandelions are edible. Munch those rascals and get your daily requirement of greens! :)

I totally feel your pain. With the gov banning herbicides, even for commercial use, I do not see the point fighting... We bought the tool, we tried. But with the amounts of them along every single town owned property... well. I do not like to feel like Don Quixote with my windmills being the dandelions...

Moss...love my moss for green. Clover chokes out dandelions, as does ground flowering dogwood, which should do well in Ontario since I'm in AK. I use vinegar/boiling water mix...they never come back!

Please don't add the dandelions or anything you considered a weed/nuisance to the compost as you will just end up with very healthy ones. No grass for me since I back up to a beautiful, grassy common area. Our dues pay for the landscaping crew so I'll let them maintain the equipment and the labor force. Cordella