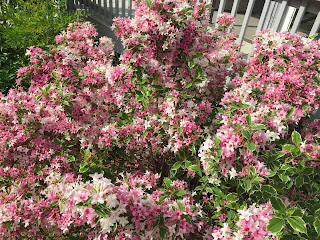 Hello, Everyone.  By the time you read this blog today, Tuesday, May 12th,
I'll either be driving from the peaceful countryside near the Potomac River to Dulles Airport in Northern VA---or already on the airplane---or back in Fort Collins, Colorado.

It's been a peaceful Spring trip back to my old hometown area of Northern Virginia.  I visited with old friends I grew up with in Arlington, VA, attended the Malice Domestic mystery conference in Washington, DC, and drove down to the river house an hour and a half from the Northern VA/DC/Suburban Maryland Metro Madness.  Here---in the midst of blooming azaleas and dogwood trees and other flowering bushes---I'm surrounded by woods and trees (but have wonderful neighbors just across the large grassy yards).  Early this evening I walked from my back door into the wide yard that stretches back to the woods and frightened a mother deer and her fawn.  Early evening grazing. 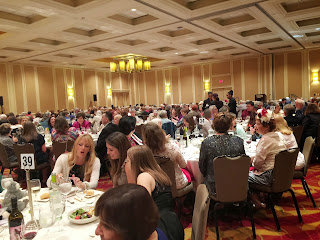 It's been a wonderful spot to recuperate from the Nasty Flu Virus I caught earlier last week.  Conferences are full of people, so it's a safe bet there're a few who are catching something and
inadvertently spreading it around.

Who would have thought that Flu viruses would still be going around in early May?  And yet, all the staff at the two urgent care and/or ER medical clinics I visited last week (I told you it was a Nasty Flu) confirmed that the Flu bug was "going around."   Curses!

Meanwhile----enjoy the above photo of another azalea bush along the side porch of the river house.  This is the first time I'd seen the pink and white azalea bush bloom.  :)

Wow! What a gorgeous azalea! Lots of them here in the Portland area, but don't think I've ever seen one with both pink and white flowers. Did you stay at the river house because you weren't well enough to fly? How do you ever get your writing done when you are on the go constantly? Cordella

I'm glad you are over the flu and had a nice time in Va. I live in CT. but have been to Va many times. I have always said that that is the furthest south I could live in. I think is is a beautiful state. I've been to Williamburg so many times, I think I could give the tours. LOL Was in Norfork once when they had the azalea festival. It was beautiful. I love the Massanutten Mt area too and of course near Charlottesville and Monticello, Thomas Jefferson's beautiful home. Not to mention the Skyline Drive in the Shenandoah National Park. DC is great too for a visit. Mom thought the buildings were so white she wondered if they washed them all the time. LOL .As you can see, I love Va. Lucky you to have a River house to go to. Hope your flight home was a good one.. Diane.