We Need a Special Holiday for Eugene!

Political candidates for an election more than a year and a half from now are announcing they are running and I'm unsure if it's just me, but are we already seeing political ads? Ads that are mean-spirited and filled with half truths? I believe we are. The late night comedians are already on it, so I think so.

First of all, we need to have a holiday honoring the person who invented the "mute" button for the TV. You have probably never heard of him, but from the small amount of research I did, it was a man named Eugene Polley of the Zenith Radio Corporation. He is credited with creating the first wireless TV remote that could turn off the sound on the television. 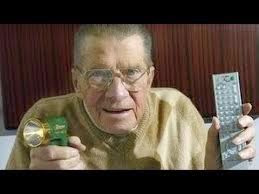 Never in all the years that I have used a remote control have I ever exercised my right to shut people up as much as I do during the way-too-long political season. Those expensive ads are annoying at the very least but it's come to the point that we are listening to lies being delivered as truth--or perhaps we always have. What would happen if they used that campaign money to actually get something done? The congress is getting NOTHING done, so we need a new system.

The candidates could have their same old fundraisers but rather than spend millions on false advertising they would use the money raised to fix bridges and roads, maybe repair buildings that are so old they collapse and kill people. They could build new schools and re-fund libraries so they can afford the newest technology. We could watch newscasters (real newscasters, not celebrities) report on what each candidate was doing with the money they raised. Helping the poor? Funding research to cure a horrible disease? 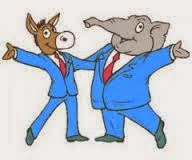 When it's all over and we've watched each candidate actually DO something, then we can vote on who we thought did the best job and helped the country the most. Yes, I'm a dreamer. So that mute button will be put to work yet again. Sigh.

What about you? What are you thoughts on how we can change a very broken system? Any ideas? I don't know about you, but I'm tired of people talking and talking not doing anything.

I agree 100%. Millions of dollars are wasted during these exceedingly long and frustrating campaign seasons. If only that money were used for the causes you suggest, we would all be so much better off. Unfortunately, common sense does not always prevail.

I agree with you Leann. I just go out of the room and do something while commercials are on anyway, as I don't really believe most of that stuff. Also, what bothers me is that people who hear the negative ads about each politician believe it. I do take the time, when the field narrows down, to look up what I can find that is the truth. It is our responsibility to find out the truth and not believe all we hear and read. Perhaps if enough people would question all the negativity the politicians or those other groups would stop and do something constructive. We owe it to our country to find the truth and not be lazy and believe what others say in campaigns and the news.. I'll get off my soapbox now. .

I totally agree with you. I ended up changing my phone number because I got fed up with them calling me too. It's sad that the message is, "I might be bad but guess what my opponent did!"
Ann

I totally agree with you. I ended up changing my phone number because I got fed up with them calling me too. It's sad that the message is, "I might be bad but guess what my opponent did!"
Ann

I never should post without coffee!! I deleted my post (above) because it was full of typos. Here is what it should have said. There's been a lot of talk about "campaign finance reform" but I don't see it happening. Also, it would be nice to know where "dark money" is coming from. (Money that is donated anonymously to political campaigns.) If special interests groups--with their own agenda-- are contributing heavily to a candidate's war chest, I think we have a right to know. If a special interest group is donating millions to a campaign, who do you think the candidate will listen to? The special interest group or Mary Kennedy (who writes heartfelt letters but is not a major contributor.) Sad to say that "money talks," but we all know it does. It was ever thus.

I just wish we could have a clean election and not an abundance of ads that I mute and why do they have to start so early.

You rock, my friend! We in the frozen north are also experiencing this sort of thing. Ads that appeal to our base instincts: greed and tribalism. We all have to fight against this and strive for a better society where logic has a role!

I know Naomi. Since when did common sense become obsolete?

I'm right up there with you, Diane! We need to be as loud as the "special interests" who are really running our country now!

Since we moved, we don't get the robo calls but it's almost a matter of time before they catch up with me. Why do we have so many "talkers" rather than "doers" these days?

I agree with you Mary. It's so frustrating to believe that our votes no longer count, that only money counts, but it's true. :-(

Totally agree Dru! It seems like one election just ended and here we go again--listening to folks who love the sound of their own voice!

Thanks MJ. Logic and common sense have left the countries! It's just sad!!

I too agree! The British system allows one month of campaigning. Voters can pay attend and decide in that time which I think is very reasonable. I'm very tired of candidates talking about others rather than what they propose. Maybe those who have to talk about the other candidates need to do so because they have nothing to offer. I once asked a candidate for State office why he couldn't simply tell his own views and opinions and plans because I thought they were valuable. His answer was that he had to make comparisons, that was what was done. I had no words and felt unheard. As my mother said, "Would you jump off the Brooklyn Bridge if someone else did?"

I'm with Zena. It sounds like the British have a better handle on things. One month to get your message out. And I think there should be a limit on fundraising as well so they can't come up with such unholy amounts of money to blow on negative ads. Also like the suggestion of the candidates actually doing something so we can see what their ideas are about, or if they learn something useful from the experience. Good discussion, group.

How I wish we could LIMIT these campaigns. And yes! What do they plan to do? What if they were not permitted during debate to talk about the other candidates--just about what their plan is? I wonder what they'd do?

I'm with you Suz. We aren't being creative anymore. It's just the same old stuff and most of us are tuned out.

First of all, Leann, thank you. I feel so incredibly stupid for not knowing about the mute button but will certainly use it from now on. In my defense, I never look at all of the buttons, need reading glasses to see the tiny little print, and normally don't wear reading glasses while watching TV.

Second, I agree with you wholeheartedly (is that a word?) It used to be that presidential campaigns didn't start until Labor Day. However, it's only April and at least 4 people have started. As an Oregonian it is even worse because we have one of the last primaries in the country so the big money/dirty campaigns go on longer. The candidates should be required to put their money into doing something good. I don't want to hear about the other person, I want to know what your solutions are. I don't want to hear about bipartisanship, I want to see it in action. Cordella

Me, too, Cordella. I have a feeling I might wear out my mute button for the campaigns that shouldn't be starting until WAY next year!

In Great Britain they have a limited time and a limited amount of money shows by law in their elections. They didn't have these 2 year campaigns. Most of it politicians spend all their time running for office server than actually working for the people that elected them. I also believe in term limits. I use my me button so much I have written out remote control me button. Lol.