I know I posted about recent movies not that long ago, but I really wanted to mention the movie I saw this past Saturday evening.  WOMAN IN GOLD is a wonderful and True Life story of one woman's fight to have her rightful family property returned to her years and years after it was stolen from her family in pre-World War II  Vienna, Austria.   DO NOT MISS THIS MOVIE.

Maria Altmann grew up in a successful and wealthy home in Vienna during those years preceding World War II.  She was close to her aunt Adele Bloch-Bauer, whose painting by the famous artist Gustav Klimt, hung in their family home.  She and her family even managed to celebrate her wedding to an accomplished young tenor opera singer, despite the sight of Nazi Stormtroopers marching in the streets below their windows.  Unfortunately, since Maria's family were wealthy Jewish Austrians, the Nazis began slowly tightening the noose of control they established in Vienna.  Maria and her young husband were able to escape with the help of friends, but her parents did not.  And the art-filled Vienna apartment was stripped bare of its artistic  treasures.   Helen Mirren portrays Maria Altmann. 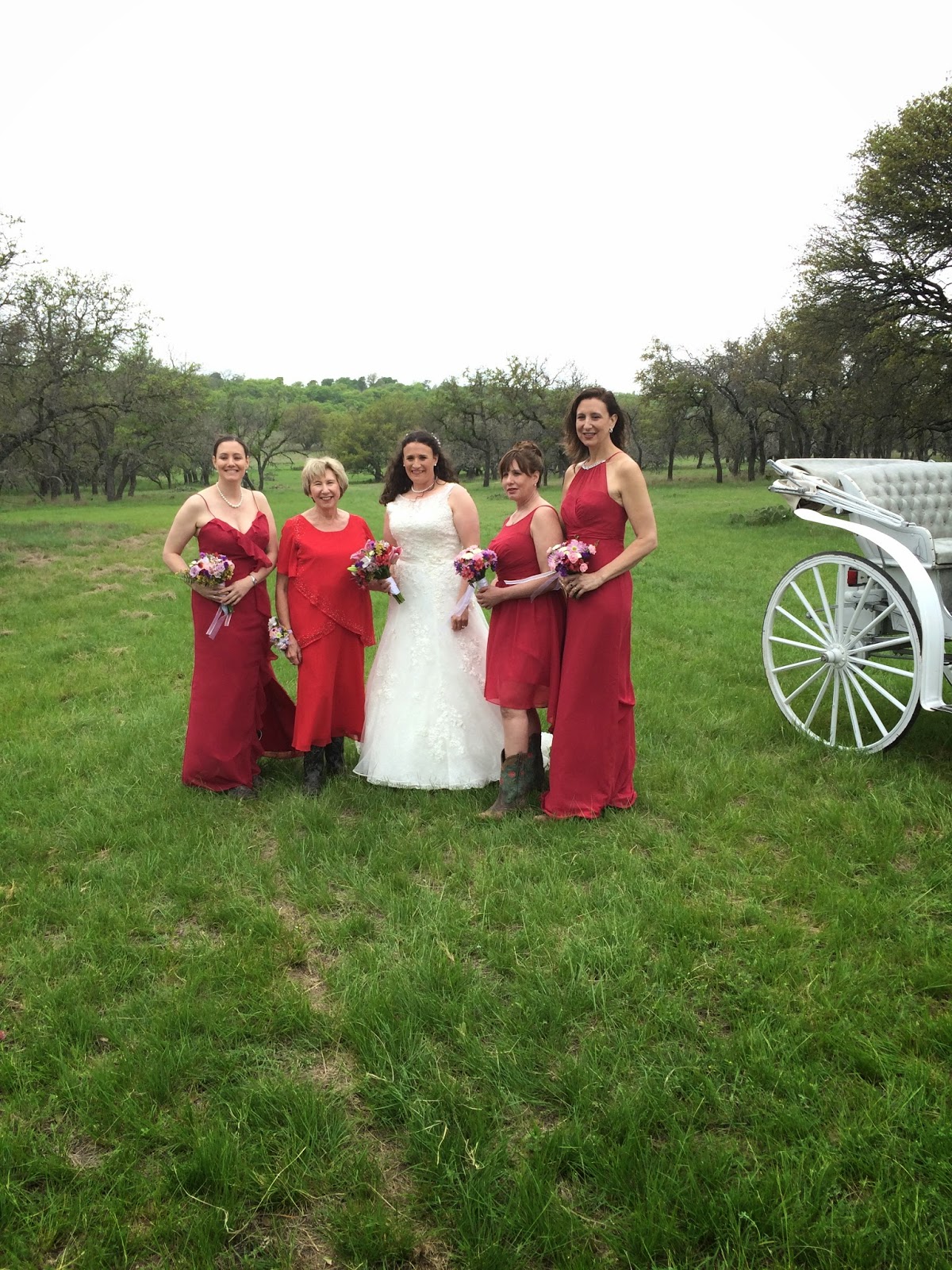 The "Woman in Gold" as the Austrians referred to the painting became the "Mona Lisa of Austria."  And this movie details the struggle Maria and her young American lawyer engaged in over a period of many years to seek justice-----and have the painting returned to Maria's family.  It is a WONDERFUL film, and I wish every young person and Millenial could see this film.  I sense their knowledge of World history, particularly of that period leading up to World War II, isn't that extensive.  This film presents real-life world history in a riveting and fascinating movie.  A painless way to learn about an important period of history.   I'm a big believer in that old adage:  "Those who do not learn from history are doomed to repeat it."

On a side note----many readers and bloggers have asked for a picture of me during the wedding in my
"Fire Engine Red" dress.  All of the photos I posted last week were ones I took, so naturally I didn't take a photo of myself.  :)   So, I asked my daughters if they had a photo on their phones, and yes----Maria found one.  :)   So, I'm posting it here.
Posted by Maggie Sefton at 1:23 AM

I've wanted to see this since I first saw the trailers on TV. Will try to get to it sometime this week. I love the acting of Helen Mirren along with Judy Dench and Maggie Smith. Just watched HM in "The Hundred-Foot Journey" on DVD last night. Also a good movie with an important message.

Thanks for the picture. I assume those are your four daughters with you. Having never been in Texas, I didn't know about the cowboy boots tradition but they certainly make more sense than heels which sink with every single step you take over grass. Cordella

I've been looking forward to this movie since I first heard about it. I LOVE Helen Mirren, and true stories always interest me, especially those involving Jews during WWII. Always nice to hear/read a good review from someone I "know," however.

Lovely bunch of ladies in the photo, and your dress is beautiful.

Your dress was lovely. Very similar to the dress I had for my son's wedding.. Mine was Lavender. I don't go to the movies much so will wait until I can see it on video.

Great picture...I will watch Helen Mirren in anything!

Doomed to repeat history seems to be the US motto, Maggie. Sounds like a great movie, and I love Helen Mirren. Love your photo, too. What a great color!

I so want to see this movie!! I love the dress and cowboy boots. I'm in Texas and we wear those things with everything. Lol.

So I really want to see this...there is a big write-up in the latest AARP Magazine. However, when a matinee cost $9.50, I'll have to wait until it hits the DVD to see it

I remember the Hundred Foot Journey. That was a good movie. Lovely. And, of course, I do love France. And, yes, cowboy boots make a lot more sense. I shopped last January at the one of the largest Western wear stores in Denver--Cavender's. They had a great selection. I had never bought a pair of "real" boots---100% leather and made in Mexico. Beautiful design worked into the black leather
and comfy comfortable. :) A little expensive but worth it. I now wear them a lot.

I agree. I love to watch the Grande Dames at work---Helen Mirren, Judi Dench, and my very favorite---Maggie Smith. Also love the writers for Downton Abbey, especially creator Julian Fellowes. :)

Thank you, Teresa. :) Now, I'll hav to find another occasion to wear it. Definitely see the movie. And tell Milennials about it. People NEED to know history. It's imperative. Of course, I'm a Historical writer, too. And my historicals are starting to call to me again.

Diane---You'll enjoy it. And probably you won't have to wait long.

LOL, I agree. I'll watch the Grande Dames in anything. Helen, Judi, & Maggie. Ohhhhh, and don't forget to see The Second Best Exotic Marigold Hotel. It has Maggie and you'll love it.

Omygato---Definitely see that movie. You will really enjoy it. And I LOVE going to Texas. I'll visit again this Fall. Summer in Houston can be sticky. I grew up Back East in Northern VA with humidity and it's hot in summer. But I've gotta tell you, the winters here in the West have been SO dry this winter I'm drying up to a flake. I'm lathering on skin creams. I think I'll start visiting friends in Florida during February next year. :) Last year I was in Mexico in February and it was delightful.

Good Lord, Andrea. You must live in Manhattan like my daughter Melissa. Super high prices. You won't have to wait long to see it on DVD, I bet. :)

Also has Judy Dench plus all those other terrific British (for the most part) actors. However, a friend who watches lots of movies but hadn't seen the first Marigold movie didn't like it very much. After I saw the second, we discussed it and decided you absolutely have to see the first to get the backstory. Just like series mysteries! Cordella

Glad to hear this one is as good as it looks! ☺