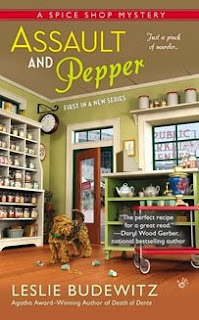 After leaving a dicey marriage and losing a beloved job in a corporate crash, Pepper Reece has found a new zest for life running a busy spice and tea shop in Seattle’s Pike Place Market. Her aromatic creations are the talk of the town, and everyone stops by for a cup of her refreshing spice tea, even other shopkeepers and Market regulars. But when a panhandler named Doc shows up dead on the store’s doorstep, a Seattle Spice Shop cup in his hand, the local gossip gets too hot for Pepper to handle—especially after the police arrest one of Pepper’s staffers, Tory Finch, for murder.

Tory seems to know why she’s a suspect, but she refuses to do anything to curry favor with the cops. Convinced her reticent employee is innocent, Pepper takes it on herself to sniff out some clues. Only, if she’s not careful, Pepper’s nosy ways might make her next on the killer’s list. . .

I like it. I love the way the story flowed and the comfortable tone that made me feel like I was part of the scene. The author did a great job in presenting this finely-tuned whodunit with a mystery that was equally engaging and enticing with its savory flavor of what’s to come. I like how the telling of this drama that was laced with spice tidbits and how it helped moved the story to an outcome befitting this story. Pepper is a great character and I like what we know about her already, her will and determination to do for her friends. This is a great series and I can’t wait to read the next book in this wonderfully appetizing series. 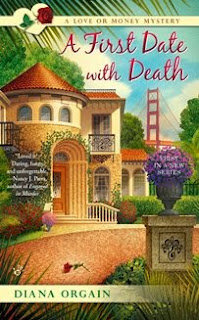 Reality TV meets murder in the first in a new mystery series from the author of the Maternal Instincts Mysteries and co-author the New York Times bestselling Scrapbooking Mysteries.

When brokenhearted Georgia Thornton goes looking for romance on reality TV, she has nothing to lose—apart from a good man, a cash prize, and maybe her life. . .

What was Georgia thinking? Sure, some cad ditched her at the altar, but can she really find love on TV? Her best friend—and producer of the reality show Love or Money—thinks so. Ten men. Ten adventure-filled dates. What can go wrong? For starters, a faulty bungee cord that hurls Georgia’s first date into a tragic spiral off the Golden Gate Bridge.

He’s replaced by Paul Sanders, Georgia’s former fiancé. But the cop isn’t looking for a TV gig. Suspecting that the lover’s leap was no accident, Paul’s going undercover. When another bachelor gets a fatal kiss-off, the reality is that someone has killer new plans for the show—and for Georgia herself. Now, under the threat of permanent cancellation, Georgia fears that the only man on the set she can trust is the one man she just can’t count on. . .

I like the premise of this whodunit with two mysteries to solve: who killed the two bachelors and who will Georgia pick as this reality show comes to an end. I love the set-up and how it the scenes intertwined with the “reality” and the “real-life” action in this enjoyable story. The author did a great job in this fast-paced drama where the suspects were few, but cunning in keeping me in suspense as to how this will all play out. This was a good read and I look forward to more adventures with Georgia and her friends in the next book in this likable series.

Thank you for the reviews. I have both of these books on my TBR list. :)

I like the sound of both books, thanks Dru. But I hope someone can answer my question about the Scrapbooking Mysteries. I am a huge Laura Childs fan, but on the last paperback, suddenly Diana Orgain was mentioned. Have they co-authored the whole series, or just the last few books?

Thanks Dru! So Laura Childs did write the first 10 books herself. So the line "co-author the New York Times bestselling Scrapbooking Mysteries" is really not fair as she only attributed to 1 book.

I had already bought them but have library books to read before them. Both did look interesting.

Thanks for the kind words, Dru Ann -- delighted that ASSAULT & PEPPER is one of your picks for the month! I'm having a great time taking readers to Seattle -- on the page!