I wanted to share this with you this week. It’s one of those 'what goes around comes around' stories, but it starts with my mother.

She was an excellent and generous cook and we still share her recipes with joy in our family.  They bring back memories of fun times. One of the simple favorites was her chocolate cake.  To me this was birthday cake. I made many of them and so did my girls, Virginia and Victoria. Everyone knew and loved Gram’s chocolate cake. 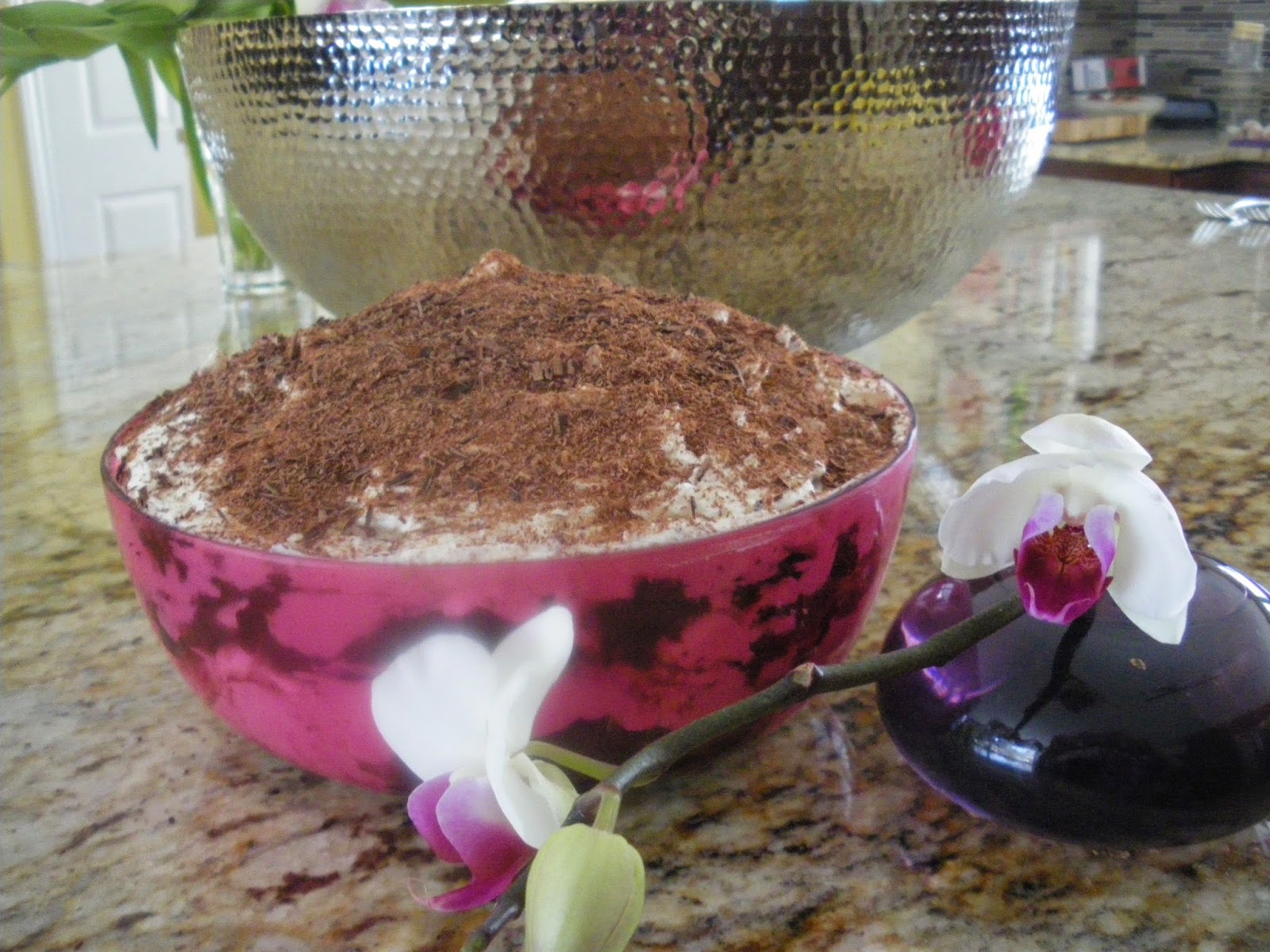 While finishing up our latest book, Victoria and I wanted to include the cake as a the base for chocolate tiramisu to include as one of Signora Panetone's recipes at the end of THE MARSH MADNESS. 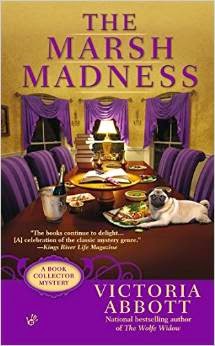 But I couldn’t find the recipe anywhere. Some things have never shown up after our move. Other times recipes are tucked into one of a hundred cookbooks and only flutter out when you least expect them.

I tore the house apart. No sign of it! Had it been thrown out?  I shook a lot of cookbooks. No luck.

Finally while I was whining to Victoria, the other half of Victoria Abbott, I mentioned my frustration.

Sure enough, in a battered little volume called My Treasured Recipes, I found, in my handwriting, the secret code to Gram’s Chocolate Cake. 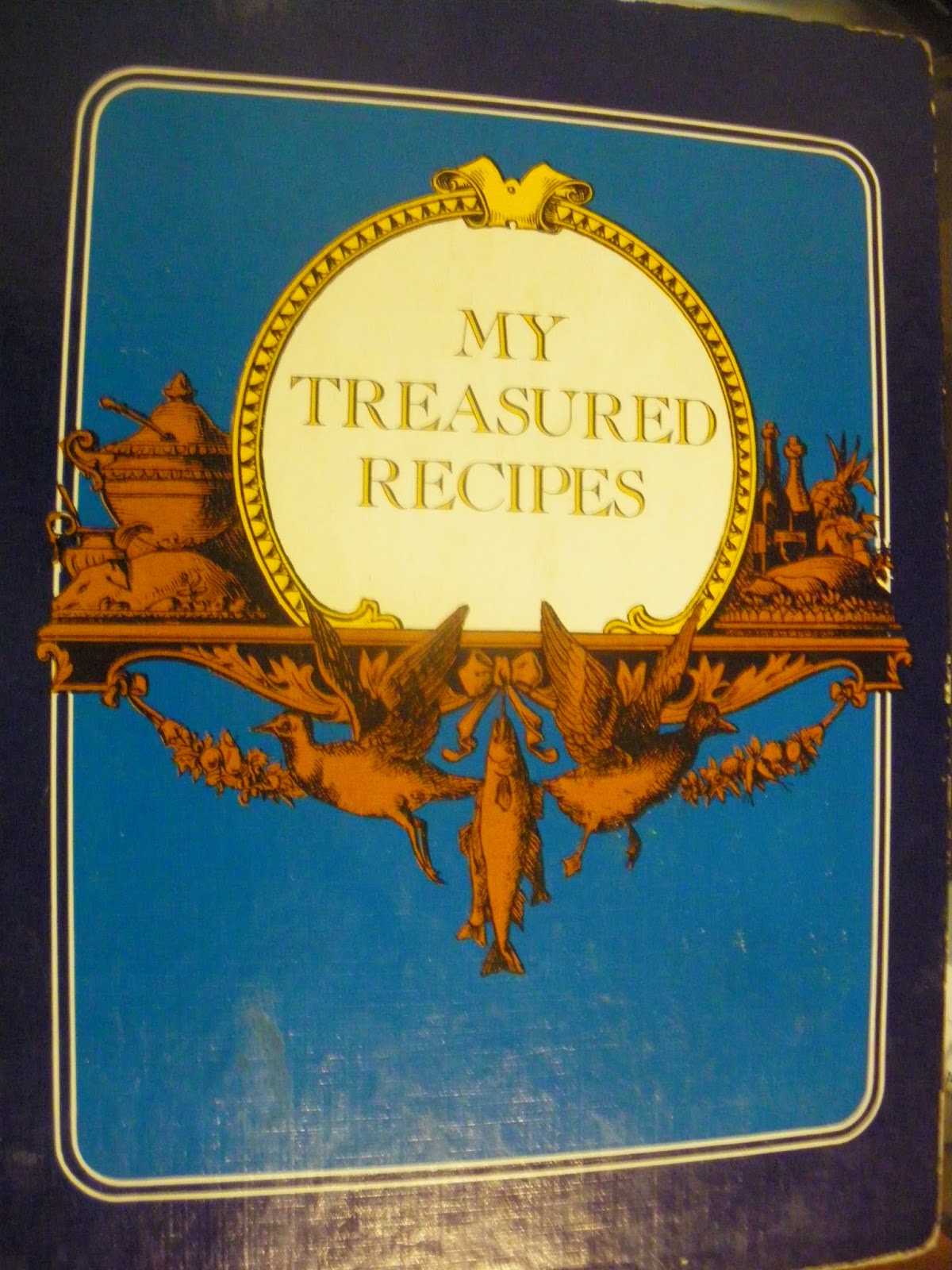 This was done before we used computers to create recipes (or before we could even imagine it!) My handwriting is a family joke, but this seemed reasonably neat. Of course, I wasn’t sure if it called for ¼ cup of milk of 1 ¾ cups of milk.  No wonder I type everything now.

But the point is we had it.  It makes two nice layers (or four if you want to slice them in half horizontally). 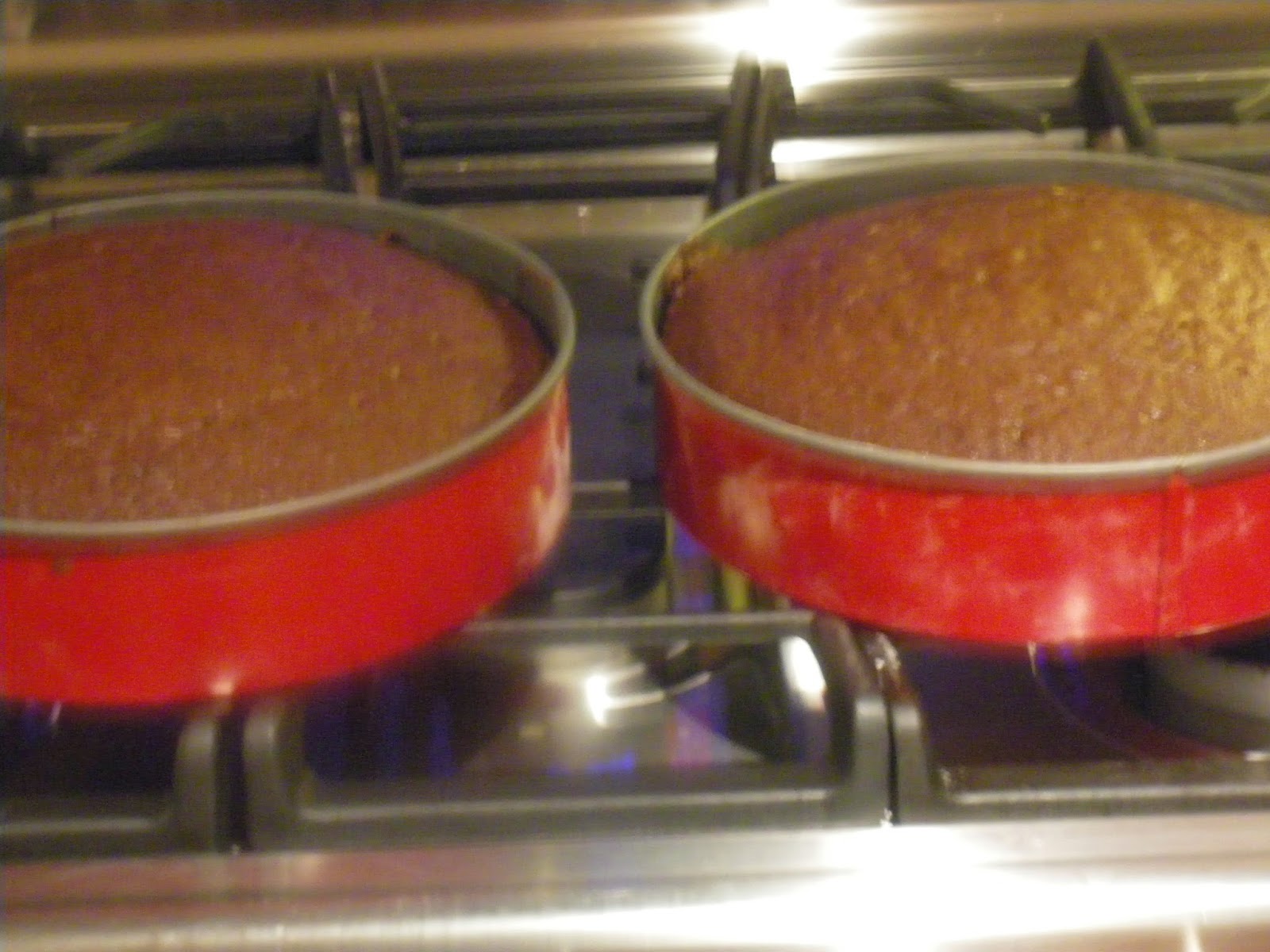 Our chocolate tiramisu was made and the day was saved.  I was surprised and thrilled at how many of the favorite foods of both sides of the family were preserved in this little book. And I’m happy that Victoria kept it.  I hope to share others here on another blog.

We hope that one of these days, this will form part of a family cookbook that we can share with every generation, as there are some terrific young cooks in the gang too.  In the meantime, I’m happy it’s here with me for a while. I still have another layer of it in the freezer in case I need to make an emergency tiramisu. Every time I make it now, I have to thank my mother and my daughter.

What about you?  Do you have a family cookbook? Any family recipes with a bit of history?  Tales of recipes lost or found?  We love food so let's hear it! 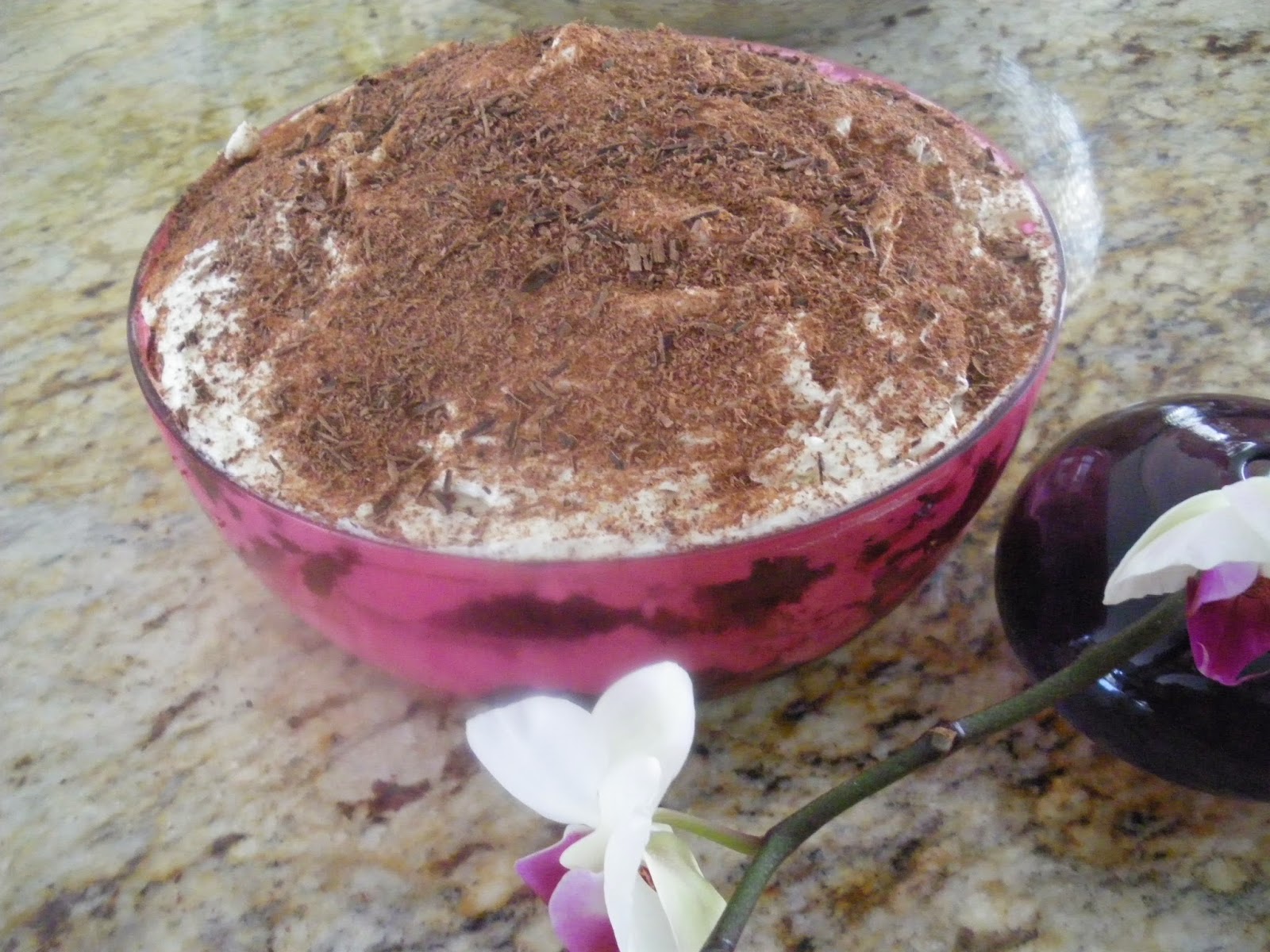 A few years ago, I did gather family recipes, made 4 copies of each of them and put them in a simple notebook, using those protective sheets to protect the recipes. Some recipes are typed, some are typed, and some were photocopies from magazines. It was a big hit with my husband and me and our 3 adult children! What prompted my making the collection was the 10th phone call about how to make something ! We each add recipes as something passes a taste test or made more than once. Our book is not definitely not fancy, but it is well-used and very handy!

What a fun post. I make my grandmother’s spaghetti sauce. When reading the Godfather nearly the same recipe in there. Truly Italian. Yummm.

My grandmother was the cook in the family and she didn't use recipes - look, taste, smell, touch. From her I learned techniques for cooking and baking plus ingredients. My aunt created three recipes by watching my grandmother cook and measuring ingredients before they were mixed. As an adult, I knew the ingredients to a "comfort food" dish so made it. I laughed when I put it together mixing up the steps and ended up with soup. I figured it out and now find "comfort" in this family meatless meal. This post brought back great memories of learning how to cook.

Family recipes should be preserved! I have three daughters, now aged 44, 30 and 27. About ten years ago the oldest and youngest started bugging me to write down recipes for certain family favorites, especially my grandmother's unique potato salad recipe. Finally, about eight years ago, I wrote down about 70 recipes, culled from cookbooks, stained 3 X 5 cards, and my memory, and added some others, and put them all into Word docs. For Christmas that year each of the girls received a big, fat 3-ring binder, a set of protective plastic sleeves, cardstock, and a CD with all the recipes on it.

Now whenever one of them mentions some dish we had, years ago, I just say, "It's in the family cookbook I gave you".

I should add that many of the recipes have personal comments added, like, "Grandpa used to ask me to make this for him", or "This was Holly's favorite when she was little, and she and Dad used to make it on Sunday mornings. She learned about fractions at age four when Steve made her double or halve the recipe."

I love this idea, Becky! Sometimes we complicate things too much. All we want is the recipe, so I am stealing your idea this week. Hugs, MJ/VA

We have to meet in a bar someday and talk about the Italian relatives we have in common, Duffy! Mine is the MIL, but my daughters are half and half! (ie Italian and Irish - just plain dangerous!)

Zena, your grandmother cooked like my mother in law and her sisters. I have copied and measured and the results are pretty good but never AS good as the original. Thanks! Hugs, MJ'VA

Wow! Karen, what a wonderful gift. I love that idea, although I note that it doesn't stop them from asking. Sounds like my gang (and me too)

I love receipes and cookbooks - and of course food. My mom was a great "by scratch" cook but also loved cookbooks and collecting recipes. I have a stack of spiral notebooks and index cards with recipes she had copied or clipped. Also The Betty Crocker Good & Easy cookbook from 1962 and the Better Homes & Gardens Meat Cookbook from 1965. (small panic after reading this post when at first I couldn't find the meat book!) And my own collection of spiral books starting when I was young, including the smart aleck comments and drawings from my younger brothers. We have "Ma's Spaghetti" (discovered to be stolen from her sister when someone told her she should make spaghetti like her sister did ;-)), Chop Suey (very American) and many others. My grandmother was also an excellent cook but never saw her with a cookbook or recipe so we are still trying to duplicate the chocolate sauce for ice cream.

I love this trip down memory lane! I remember all those cookbooks - and the very American (even here in Canada) Chop Suey - my mother made it too.

Thanks for adding to the fun today.

Nope, no family recipes at all but I do love chocolate cake! But I do sometimes call my parents for cooking advice.

That's what parents are for Aurian! We love chocolate cake too.

I collect cookbooks but my oldest and best stand-by is "Betty Crocker's New Picture Cook Book" (1961) which is similar to the one Mom had (don't know what happened to hers). My sister has Mom's recipe box with the 3x5 cards with many of the family recipes on them. I've just copied some of the ones I want, and they live in the pages of Betty since I didn't want to look thru a bunch of books to find something. Cordella

Before I got married, the women on my side of the family threw a wedding shower and asked all the guests to come with their favorite family recipes. Since the guests were from my husband's family, too, we got treasured recipes from both families. These were placed in a binder and given to my husband and me. I still refer to those old recipes often, and I cherish them far more than anything I can find online. I am currently in the process of compiling favorite recipes to give to my kids when they get their first apartments or homes--so they always have the recipes from their childhoods at hand. Thanks for such a wonderful post. And the chocolate tiramisu looks and sounds sooo good.

Good thinking, Cordella! Keeping them together is the answer.

Thanks for that tip. Hugs. MJ

What a lovely idea - favorite family recipes for a shower. These are true treasures!

Thanks for coming by and sharing.

In 1982 when my youngest brother was engaged to be married, I decided to compile a book of favorite recipes in honor of their marriage. So (unbeknownst to the happy couple) I sent out letters and made many phone calls (long-distance!) to relatives and friends, asking if they'd like to have any recipes, tips, stories included and got an avalanche of responses. So within about 4-6 weeks I typed up the recipes on my trusty little Smith-Corona, and did illustrations myself in pen & ink. My parents were so thrilled with the results that they generously offered to have it locally printed in plastic spiral paperback version. I was so excited, I even had it copyrighted!

We brought a box of the books to the rehearsal dinner, surprising my sister-in-law to happy tears, especially when she saw it was dedicated to them in honor of their wedding, and gave out copies to the all the guests. It was a big hit at the party! After the wedding I made sure all the contributors who couldn't make it to the wedding received their copies.
I think we had 250 printed, ended up giving away about 175, and Mom and I each kept 10 copies, then much to my surprise friends offered to BUY copies to give to their friends! ($5 each, which nearly paid for the cost of printing!)
One of my cousins wanted to sell copies in a New Orleans hotel where he worked, and I had to reprint another small batch. What a crazy, fun experience that was for all of us! What makes me happiest about it now, besides the book still being used through the generations, is that many of my relatives who contributed to that labor of love have since passed away, but are always remembered fondly every time the book is used.

Love the Family cookbook stories. We started one about 20 years ago for my generation. Now we've expanded it to the next generation. When they graduate from. HS they get a copy of it. All the recipes have little notes about where they came from, whose favorites they are, etc. Lots of family history.

I've even got most of it in a searchable PDF for those of them Nieces and Nephews that want electronic versions versus paper copies. But we ALL use the recipes. Definitely enjoy all the links to the past.