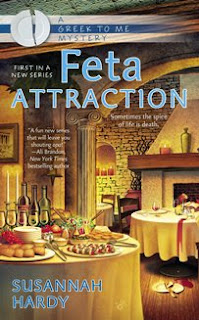 Georgie Nikolopatos manages the Bonaparte House, a Greek restaurant and historic landmark in beautiful upstate New York rumored to possess ghosts and hidden treasure. But when her husband disappears and her main competitor is found dead, it’s up to Georgie to solve a big fat Greek murder.

With her husband, Spiro, inexplicably gone for days, Georgie has her hands full running the restaurant and dealing with the crew of the TV show Ghost Squad, called in by Spiro to inspect the house for haunting. So when she has a chance to take a boating excursion on the St. Lawrence River with her friend Keith Morgan, she jumps on it. But their idyll is quickly ruined when they discover the body of rival restaurant owner Domenic “Big Dom” DiTomasso floating in the water.

When the police start asking questions, it doesn’t help that Spiro can’t be found—and with Georgie on their suspect list, it’s up to her to find her missing husband and find out who killed Big Dom before someone else’s order is up.

Missing husband and lost treasure are the premise in this new cozy mystery featuring Georgie N. who leads a complicated life near the Canadian border. This was a good mystery that quickly became a page-turner as I was interested in what the treasure was and if she would find her husband. I enjoyed how well the chapters flow with the introduction of some of the cast that interacted with Georgie, especially Inky, who is a lovable soul. A well-planned mystery with suspects that kept me guessing and a few twisty turns, created a pleasantly appealing whodunit that I look forward to more exciting adventures in Bonaparte Bay.

Reach out to Susannah at susannahhardybooks.wordpress.com 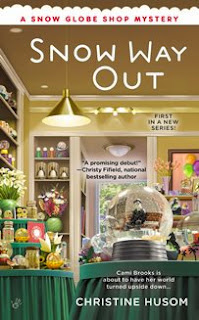 Ever since she was a child, Cami has loved the sparkling beauty of snow globes, and now, she sells them. In fact, they’re so popular, Cami and her friend—coffee shop owner Alice “Pinky” Nelson—are hosting a snow globe making class.

After the flurry of activity has ended and everyone has gone off with their own handmade snow globes, Cami spots a new globe left behind on a shelf, featuring an odd tableau—a man sleeping on a park bench.

On her way home, she drifts through the town park and is shaken to come upon the scene from the globe—a man sitting on a bench. But he isn’t sleeping—he has a knife in his back. When the police arrive, it’s clear they consider Cami a little flaky and possibly a suspect. After her friends also come under suspicion, Cami starts plowing through clues to find the cold-blooded backstabber—before someone else gets iced. . .

I love the comfortable tone and how easily the chapters flow from one scene to another. I enjoyed learning about the protagonist and her friends and I enjoyed how the solving of this mystery played a role in nicely done whodunit. I like how the mystery was set up to give us an idea of who could or could not be the killer and it was fun watching all the pieces fall into place, especially when the killer was identified. It was fun getting to know the backstory of Camryn’s life with her friends and family and I enjoyed the small-town atmosphere, the lovable cast of characters and the easy-going dialogue. This is a pleasantly appealing and delightfully charming addition to the cozy mystery genre and I can’t wait for my next visit to Brooks Landings.

Reach out to Christine at christinehusom.webs.com 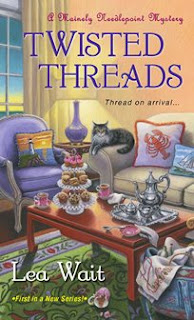 Returning to the quaint coastal town of Harbor Haven, Maine—a place she once called home—Angie Curtis finds her memories aren’t all quite pleasant ones. . .

After leaving a decade ago, Angie has been called back to Harbor Haven by her grandmother, Charlotte, who raised her following her mother’s disappearance when she was a child. Her mother has been found, and now the question of her whereabouts has sadly become the mystery of her murder.

The bright spot in Angie’s homecoming is reuniting with Charlotte, who has started her own needlepointing business with a group called Mainely Needlepointers. But when a shady business associate of the stitchers dies suddenly under suspicious circumstances, Charlotte and Angie become suspects. As Angie starts to weave together clues, she discovers that this new murder may have ties to her own mother’s cold case. . .

Where else will you find a daughter who comes home to find a mother lost many years ago only to discover that she was murdered? With a powerful first line, this drama with all its charm pulled me in and I felt every emotion that Angie felt as she took on the role of solving not one, but two murders. Expertly written by the author with a comfortable tone and a slew of suspects, it was quite enjoyable watching all the pieces come together as long buried secrets played a role in her mother’s murder. Splendidly executed with great dialogue and a marvelous cast of characters led by Angie and her grandmother, this was a great read and I can’t wait for the next book in this terrific series.

Reach out to Lea at leawait.com

How do you choose which of all the books you read this month to review for Cozy Chicks?

The easy part is deciding to only focus on new series. The hard part is deciding what to read. I know what books are coming out in a given month long before it hits the shelves, so after reading the synopsis, I pick up to four books that looks interesting and then decide on at least two that I will feature on this post. I do try to read new series from at least two different publishers. Sometimes it works out, sometimes it don't.

Thanks dru! I always like these peeks into new books!

The first book, idyllic boating with a male friend, while her husband is missing. Is she estranged from her husband? Having a fling? And ... most importantly, are there ghosts? Is this a paranormal cozy?

All of these cozies sound wonderful, Dru. Thanks for your excellent reviews ~

Thank you for the cozy report! Always love hearing from you!

None of these titles are paranormals.

Thanks for sharing the information about these cozies! =)