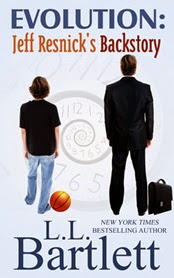 Last Christmas Day, I unveiled (what was then) the latest Jeff Resnick "book" in ebook format.  It wasn't a novel. It was a collection of short stories.  They weren't even mysteries.  Instead, (as the title conveys), it was Jeff's backstory.

According to Wikipedia:  A backstory, background story, back-story or background is a set of events invented for a plot, presented as preceding and leading up to that plot. It is a literary device of a narrative history all chronologically earlier than the narrative of primary interest.

While working on the four original books in the Jeff Resnick series (over the span of about five years—Dead in Red and Dark Waters came much later), I sometimes wrote character sketches to explore why Jeff and Richard reacted the way they did. The first short story was Bah! Humbug (which comes directly after Cheated By Death). While writing a little about Jeff and Richard’s first Christmas together after they were reunited, I wondered what might have happened during their first Christmas together many years before. Out came The First Noel.

I was lucky to have a published author in my local writers’ group critique the first three chapters of Cheated By Death. I was taken aback when she asked, “How long has your protagonist had an eating disorder?” Her observation came as rather a shock to me, but then I reread the first two books in the series, and Cheated By Death, and realized she was right. Jeff definitely showed signs of being food adverse. And so I wrote Food For Thought to explore the whole concept.

Next came the short story Reunion. I was trying to figure out how Jeff told Richard about the death of his wife, and again how difficult it was for the brothers to reconnect.

The rest of the stories came from references made during the course of the various books. In Murder On The Mind, Jeff told Maggie not only how he and Richard met (albeit in only a couple of sentences), but also how his wife died. I needed to know more about those events, so I wrote about them.

Jeff told Brenda about how he repaid Richard’s grandmother for her shabby treatment of him, again in Murder On The Mind, and that incident came back to haunt Jeff in Dark Waters, five books later. There are parallels with the books and the short stories. For example, Jeff and Richard playing basketball or chess in the present time.

Since it's not a mystery, it's been hard for readers to find the book, but those who've read it seem to like it.  Amazon paraphrases reviews (there are currently 39 listed on the Kindle edition page).  Here's a sample:

“Having read the Jeff Resnick series twice, I rate it as one of my favorites.”
Margie B | 8 reviewers made a similar statement

“These stories are beautifully written, and sometimes, hauntingly sad.”
bunnygirl | 4 reviewers made a similar statement

"Gets you involved and makes you feel like you are with the characters.”
Janelle B | 4 reviewers made a similar statement

The print edition is hot off the press.  If you've read the six novels, perhaps you'll be interested in the eleven stories that make up Jeff's backstory, too.  (This one's personal.)

P.S.  The audio edition is already in the works and should be available in early 2015.

Posted by Lorraine Bartlett at 6:48 AM