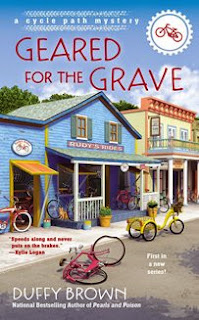 Mackinac Island is a peaceful summer resort town where everyone coasts through the streets on bicycles. But after someone sends a prominent local on her final ride, it’s up to one resourceful visitor to get things running again.

Hoping to shift her chances of a promotion in her favor, Evie Bloomfield heads to Mackinac Island to assist her boss’s father. Rudy Randolph has broken his leg and operating his bike shop, Rudy’s Rides, is too much to handle by himself. But Evie’s good turn only leads to more trouble.

After Evie’s arrival, wealthy resident Bunny Harrington dies in what looks like a freak bike accident. Upon closer inspection, Bunny’s brakes were tampered with, and now the prime suspect in her murder is also Bunny’s number one enemy: Rudy. So if Evie hopes to stay on her boss’s good side, she’ll need to steer Rudy clear of jail. Now she must quickly solve this mystery so she can put the brakes on the real killer’s plan.

What a delicious read that tickled my funny bone. This evenly-paced drama was a refreshing mystery executed in a style that pulled me in immediately for a nice ride that I did not want to get off. I laughed and laughed at the antics that Evie and Irma got involved in, all to clear a friend's name. And adding Mother, what a perfect touch. I know whenever I read a Duffy Brown mystery, she is going to delight my senses with a quirky cast of characters that includes the heroine of this light mystery and an unexpected sidekick that is so lovable, I wish the best for her. The witty banter, the small-town atmosphere and again this likable cast will keep me coming back to Mackinac Island for years to come. A great read and I can't wait to see what's coming next for Evie and her friends. 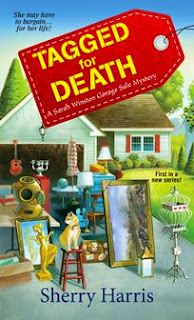 Starting your life over at age thirty-eight isn't easy, but that's what Sarah Winston finds herself facing when her husband CJ runs off with a 19-year-old temptress named Tiffany. Sarah's self-prescribed therapy happily involves hitting all the garage and tag sales in and around her small town of Ellington, Massachusetts. If only she could turn her love for bargain hunting into a full-time career.

One man's junk is another man's treasure
But after returning from a particularly successful day searching for yard sale treasures, Sarah finds a grisly surprise in one of her bags: a freshly bloodied shirt…that undoubtedly belongs to her ex, CJ, who now happens to be Ellington's chief of police. If that's not bad enough, it seems Tiffany has gone missing. Now it's up to Sarah to prove that her cold-hearted ex is not a cold-blooded killer…

But finding that treasure can be murder.

This was a fun read that was both energetic and entertaining at the same time. I loved the plot setting and getting to know the main characters a bit better as the story moved forward. The author did a great job in keeping me tuned to the pages, especially that surprising twist that had me going “whoa” because I never saw that one coming. Well-played Sherry, well-played. With a friendly cast of characters, good conversations and a good story, this whodunit is a welcome addition to the cozy mystery genre and I look forward to reading The Longest Yard Sale, the next book in this pleasantly appealing series. 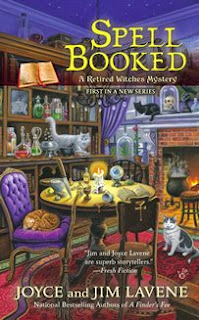 Once upon a time in Wilmington, North Carolina, three witches ran a curio shop named Smuggler’s Arcane. But as the years passed, their magical powers started to fade—leaving them no choice but to conjure up a retirement package.

Before they could blink their eyes or twitch their noses, Molly, Elsie, and Olivia somehow became eligible for AARP. But they can’t fly off to Boca Raton just yet. First they must give up their magic, recruit and train three new witches, and pass on their cherished spellbook.

They’ve barely begun to consider potential practitioners when Olivia winds up dead and their spellbook is stolen. To honor their friend and reclaim their spells, Molly and Elsie are about to go wand-to-wand with a dangerous young witch more powerful than the trio was in their prime. And this time they’re going to need more than magic up their sleeves.

I like it. This was a fun read with a great cast of characters that includes Elsie, Molly and Olivia to name a few. The pacing and flow of this story made it easy to follow the mystery which had some twists that enhanced the storytelling. I enjoyed the interactions between the three witches, and at times a few of their capers had me chuckling a bit. I enjoyed this story that boasted great conversations, a small town magical feel and a supporting cast that envelopes our main protagonists.

Visit Joyce and Jim at www.joyceandjimlavene.com 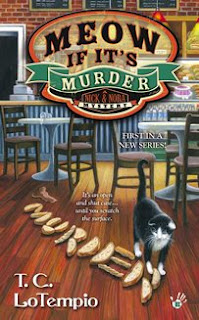 Nora Charles doesn’t believe in fate, even if she is a crime reporter who shares a name with a character from The Thin Man. In fact, she’s moving back to Cruz, California, to have a quieter life. But after finding an online magazine eager for material, and a stray cat named Nick with a talent for detection, Nora’s not just reporting crimes again. She’s uncovering them.

Back in her hometown, Nora reconnects with old friends and makes some new ones, like Nick, the charming feline who seems determined to be her cat. But not everything about Cruz is friendly. Writing for a local online magazine, Nora investigates the curious death of socialite Lola Grainger. Though it was deemed an accident, Nora suspects foul play. And it seems that her cat does too.

Apparently, Nick used to belong to a P.I. who disappeared while investigating Lola Grainger’s death. The coincidence is spooky, but not as spooky as the clues Nick spells out for her with Scrabble letters—clues that lead her down an increasingly dangerous path. Whether fate put her on this case or not, solving it will take all of Nora’s wits, and maybe a few of Nick’s nine lives.

I’m a fan of Nick and Nora from the Thin Man, so when I heard about this series, I was eager to read it and I totally loved this light-hearted and engagingly entertaining whodunit featuring new amateur sleuth Nora and Nick her feline companion. The premise of the mystery sparked a memory and I liked how the author took care to bring this story to a satisfying ending, despite another mystery lurking in the winds which I suspect will be a continuum subplot. I enjoyed the interactions Nora has with her BFF Chantel and the tall, dark and handsome detective, as well as Ollie who I hope we get to see more of in future stories. This was a great read and I can’t wait to read the next book in this wonderfully terrific series.

Definitely added to TBR list although I did preorder some.

Wonderful selections, Dru!! Happy reading ahead for all of us.

Thanks Dru - appreciate the introductions to these books.

Thanks, Dru, for the great review of Geared for Grave. That you had fun with Evie, Fiona, Irma and the Mackinac Island gang sure makes my day!

Thanks Dru! So glad you liked Nick and Nora! Toni & ROCCO

Thanks Dru Ann! You have wonderful, eclectic taste!

Thanks so much for the recommendations. I immediately had them downloaded to my kindle.

I've already read the Duffy Brown book, and I so want to read Spell Booked! I love witches :)

Thanks Aurian for picking up Geared for the Grave, I truly appreciate it!! Hugs.