The next Booktown Mystery!

As most of you know, I write the Booktown Mysteries under the name Lorna Barrett--one third of my trifecta of writing personalities.  The next book in the series, is A Fatal Chapter.  (Note I didn't say final. Too many peoples seem to be calling it that. This is NOT the last Booktown Mystery.  I'm about to start #10.)

While we write the books, the publisher's marketing department writes the "blurb" that goes on the back cover and to all advertising places. (Think Amazon, etc.)  Usually, the author is kept in the loop about these things.  For some reason, this little detail seems to have fallen through the cracks for A Fatal Chapter.  I read the blurb for the first time on Amazon.  Here it is: 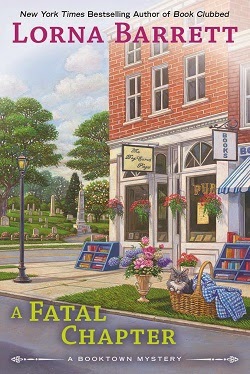 While out walking Sarge, Tricia is led by the agitated dog to a man lying in a gazebo. She’s startled when she recognizes Pete Renquist, the president of the Stoneham Historical Society, who appears to be suffering from cardiac arrest. When Pete later dies in the hospital, the discovery of a suspicious bruise and a puncture mark on his arm suggests he may have been murdered.

Haunted by Pete’s enigmatic last words to her, Tricia begins to consider who had a motive to kill her friend. Did Pete take his flirting too far, only to have a jealous husband teach him a lesson? Or did he discover something in the town’s historical records that his killer wanted kept secret? Tricia is determined to get to the bottom of things before someone else becomes history…

Have you ever been on a ghost walk? The Stoneham Historical Society plans to give nighttime tours of the Stoneham Rural Cemetery, but someone wants to prevent that--taking extreme measures. Can Tricia figure out who is behind the attacks before someone else becomes the cemetery's newest resident? 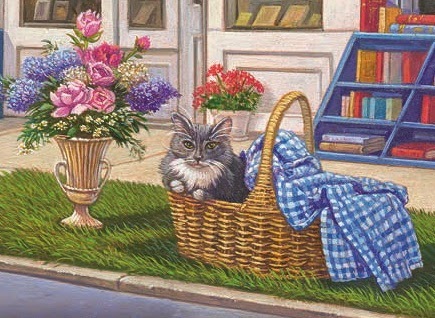 What's your take on the story?  Are you intrigued by either description?  If so, which one?  Should they be combined?

And by the way, how do you like the cover?  (I think it's the prettiest one yet.)

A Fatal Chapter will be released on June 2nd. It is now ready for preorder from the following places:

Posted by Lorraine Bartlett at 6:14 AM

Love the cover. I can't wait to see where the story goes! Is it June yet?! I'll be placing a preorder for sure.

I like your description best and LOVE the cover!

I enjoy your books no matter the cover. It could be on the shelf in a plain brown wrapper and I'd buy it. It's your wonderful writing that makes the book not the artwork.

I think the first one sounds more like one of my short reviews, where I'd say "and if you'd like to know who did it, go out and beg, borrow or steal the book".

Your much shorter one is all that should have been needed.

I love the cover. To a potential buyer, I think I would like the two descriptions on the back. I have pre ordered mine already.

Congrats on another Booktown Mystery. I love this cover - especially the cat in a basket.

In all honesty the first time I ever picked up one of your books was because of the cover. The fact that it was in the mystery section made it that much better. And now I love them all.

The cover is splendid!!

I love the cover art; that is what draws me in to take a closer look at what is behind that cover. And, I do like your "blurb" best, but I do like the second half of the marketing departments "blurb." But, no matter what, I am excited to read #9, I have been waiting. Thanks for the books and happy writing.

It is a lovely cover. I preordered the book. Sorry but, I prefer the publisher's summary of the book.

Love the cover and prefer your blurb. Publisher's is too wordy!

I could have sworn I had some of the books in this series. But not seeing any on my TBR shelf.