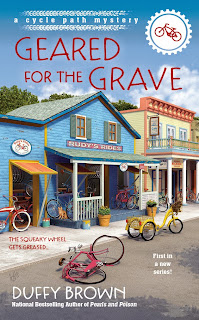 Mackinac Island consists of two main directions...up and down and with no cars and anything horse-drawn being kind of pricey that means if you live on the island for any stretch of time you’ll be in the best shape of your life from walking the hills or riding your bike because these are some hills!

And this is a really good thing so you can walk off all that fudge you can eat!

The town is mainly two streets, Main Street and Market Street. Main faces the water and the one street back is Market. There are the usual tourist shops of t-shirt etc but the one thing that will capture your attention right away is that there are 18...yes 18!...fudge shops in town. Ryba’s, JoAnn’s, Murdocks, Mackinac Fudge...you get the picture 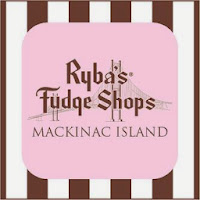 Inhale the mouthwatering aromas. Partake in the deliriously delicious confectioneries. Revel in the experience – your palate will think it won the lottery!
The Island doesn’t claim to have created fudge. But after one taste, you’ll agree that it was perfected here. The flavors are unworldly the taste to die for.

The tourist center says…Born in the years following the Civil War, the tradition of fudge making is stronger than ever and fudge remains the Island’s most popular and tastiest souvenir.
I think they sell TEN tons of the stuff a year. That is a LOT of fudge. And of course there are a bazillion kinds of fudge...
A typical story of fudge on the island is Sara Murdick. The gal sure knew her way around a kitchen, there’s no doubt about that. After arriving to the United States from Germany in the 1800s, Sara and her family eventually opened a confectionery in southeast Michigan. 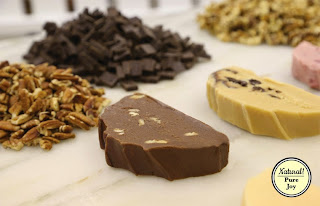 In addition to a perfect recipe, the art of fudge making also plays an important role on the island besides eating it...you can watch it being made and there is actually a Fudge Festival every year. Holy cow! Nothing better than a fudge festival! 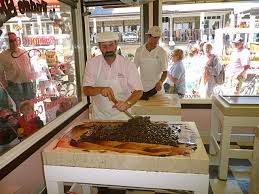 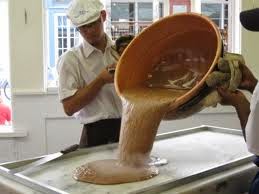 All the fudge shops have big windows where you can watch men…usually it is the guys doing the this ‘cuse tossing fudge is hefty work. They throw big kettles of fudge onto big marble tables then use a thing that looks like a canoe paddle to flip the fudge up onto itself creating a loaf of fudge as they toss in nuts and 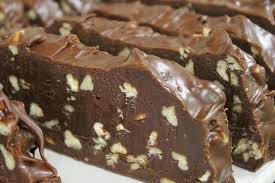 chocolate bits and bits of maple and toffee and cookie and peppermint etc…you get the picture on to the loaf as they flip it over and over and over as it cools. 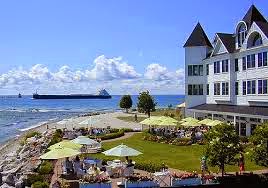 Good morning! I love any day that starts with talk of chocolate. I'm a traditional fudge kinda girl: chocolate, walnut, pecan, peanut butter---nothing too crazy. And now I want fudge! Thanks, Duffy---lol!!! :-)

I generally go for just plain chocolate fudge...... I'm that person who goes into Baskin-Robins and orders plain vanilla. I can't wait to read your series on the Island!

Oh, Nicole! I know what you mean, I got sooo hungry just writing the post. LOL

Hi, Patricia. And the chocolate there is fab!!! So dying for chocolate fudge right now. Yummm.

I’m right behind you ordering another cone of vanilla. LOL
Thand, for the good thoughts about the Mackinac series, I truly appreciate it.
Hugs, Duffy

I think I gained five pounds just reading his blog and looking at the pictures, lol. Chocolate fudge with pecans is my favorite fudge. My Aunt Jenny use to make some for me every Christmas.

Oh my, I had better stay away from this place. They would have to ship me home on a barge. I love fudge...what is my favorite you ask? All of them. :D But I have to say chocolate-chocolate and peanut butter are my favorites followed by toffee.

Definitely a huge favourite of mine. Sadly, it only lasts one day when I make it.

Fabulous post, Duffy! Bad for the diet and good for the mood. I want to move there now.
But instead will enjoy the books.

Although I like most of those foods you mentioned, my favorite fudge is still plain chocolate (sometimes with walnuts) which Mom would make at Christmas. Because we lived in a dry climate, it was harder and less creamy. Creamy fudge just doesn't do it for me.

My favorite fudge from Mackinac Island came from Murdicks. It was raspberry. And try as I might, I've not been able to make that particular fudge myself and have it taste like it did on the island. To say they perfected fudge making is the truth.

Hey Duffy, I think the Murray Hotel has the best selection on the island. They make "Tiger" that has peanut butter in it - quite tasty! Is your new story set on Mackinac?

Hi, Annette. Christmas is the time for making fudge here at the Brown house too. Love the stuff. Peanut butter is my fav. Yummmm.

Oh, Cricket, I so hope you get to MI to visit. You’d love all the adorable fudge shops. The best part is you can eat lots of it as you walk it off.

Hi Marjorie.
I try and give it as presents to get it out of the house. Fudge is always a crowd pleaser here too. Hugs, Duffy

Hi MJ! Fudge is horrid for the diet but once in a while a terrific splurge. Thanks for stopping by. Hugs, Duffy

Chocolat fudge with walnuts is always a crowd pleaser. Just love watching the fudge-makers on MI tossing in nuts and yummies by the handfuls. Such fun.

Hi, Angie. I’m so happy you’ve been to MI! What a great getaway. Murdicks is fantastic fudge. I tried to duplicate the blueberry here at home and failed miserabley. They do have the secret up there. Yummm.

Hi, Sue. I know what you mean…all this talk about fudge gives me a sugar high and total craving for the stuff. :-)

YES! Gearedf for the Grave is the first in the Cycle Path Mysteries set on Mackinac Island and comes out in Dec. I love Mackinac! Been there for the Lilac Festival and took our bikes (daughter and I) and rode all over the place. What a blast!

Hi, All! Anyone wanting a Geared for the Grave tote just email DuffyBrown@DuffyBrown.com with you mailing info.

Chocolate mint, hands down -- though I'm willing to try almost any flavor so long as there are no nuts. ☺

Chocolate mint is my fav for Chrismas…just tastes like Christmas. Yummm. No wonder I get fat durning the holidays. :-)

I would never be able to survive here fudge wise. I am allergic to chocolate. But I would have so much fun watching them make fudge and living on a tiny little island.

Hi Duffy! I am going to have to go with Tiger Butter wit Peanut Butter as a very close second.

Hi, Lindsay. I love watching them make the fudge, it’s really an art to get it to cool just right and not get all grainy. They make it and then we all eat it. Love having a man cook for me. LOL
Hugs, Duffy

Oh Melanine, Tiget Butter sounds amazing! I need to give this a try. What’s in it?