Winging it in the kitchen

Yesterday morning the phone rang at 8:15.  It's almost NEVER a good thing when the phone rings that early, but yesterday it was my brother asking if I wanted to go with him to the Public Market.  Did I?  You bet!

So, he picked me up and we got stuck in a huge traffic jam. (Remind me never to go to the Public Market BEFORE 9 a.m.)  But we got there okay, and then the fun began.  Veggies are sooooo much cheaper there than at the grocery store, so I often go bananas.  I knew I wanted to make potato leek soup for lunch, so leeks and potatoes were the first things on my mental list.  But I also bought acorn squash (50¢ each--how can you go wrong?), delicota squash, broccoli, scallions, and a cider doughnut for Mr. L. (My brother said, "He expects it." Okay.)  My carrier bag was so heavy, I thought my arm would stretch another 4-5 inches before we got back to the car and off we went for home.  (Traffic was STILL jammed up southbound, but we flew northbound without a hitch.) I made the soup for lunch (click this link and scroll down to find the recipe), and then decided since I had more than half a roast chicken left--and had bought wayyyy too many leeks--that I'd make a chicken and leek pie for supper. 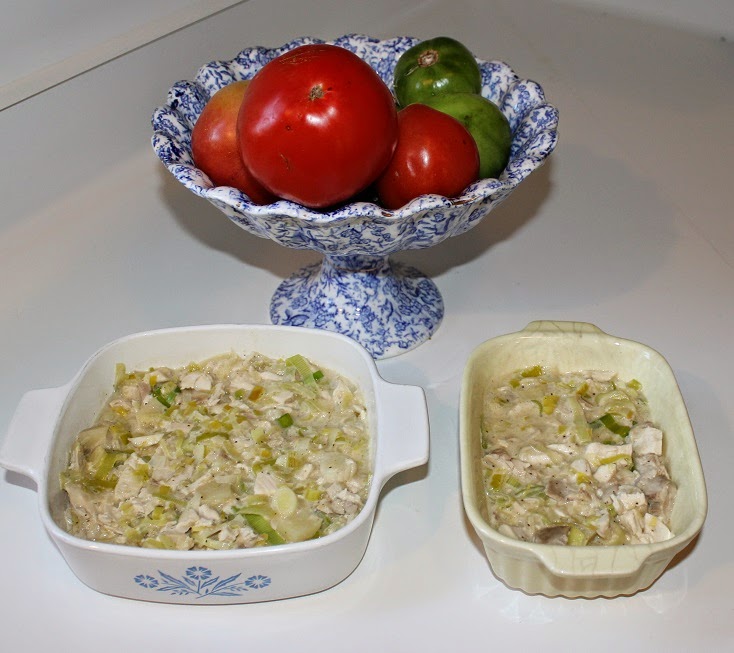 I've never made one before, but I'd had some at a pub in England the last time we went.  So I hopped on the Internet and started looking for recipes.  One had peas, one used mostly onions, some wanted you to boil a chicken first.  Uh-uh.  I printed out one of the recipes, but I didn't use it. I decided instead to wing it.  I sauteed the leeks in butter, then decided to use the leftover soup as the base for my gravy.  I added some salt and pepper, let it cook down a bit, then added the chicken.  Next up, I tossed the whole she-bang into casserole dishes.  One for us, and one for my Mum.

Since supper was more than five hours away, I put them in the fridge to cool, then later put on the crust.

I popped it into the oven (400F) for about 45 minutes, and we were ready to eat.  I'd also got some Cohen's Seeded Rye Bread at the Public Market, and that was all we needed.  (I chose to cut out maple leaves for decoration because Monday is Canadian Thanksgiving. Why not celebrate a little early?) 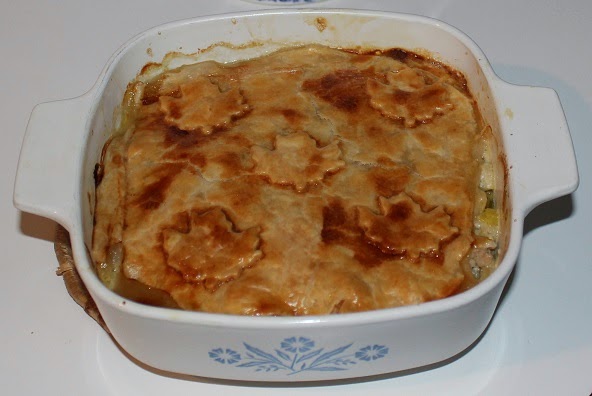 OMG -- I've made a few good chicken pies in my day, but this was the best!  So the next time I buy too many leeks (and it could probably happen in the upcoming weeks), I know what I'm going to make.

I have a recipe from Barbara Kafka's Microwave Gourmet cookbook that is very easy, and including the time to cut up the veggies, doesn't take very long to make. It calls for cream, but I've made an equally satisfying version with my husband's 1% milk. I already have the recipe typed and in a Word doc because it was included in a family cookbook I made for my three daughters several years ago.

Leek & Potato Soup
From Microwave Gourmet, by Barbara Kafka (comments are hers, unless otherwise specified)
This is the French mother’s equivalent of chicken soup. If you are cold and tired, try it. You’ll feel better soon. Serves 4.
2 small all-purpose potatoes (3/4 pound), peeled and diced
1 C diced leeks, about 2 medium leeks, (white parts and about 1 inch of the green)
2 C chicken broth
1 C heavy cream
2 T butter
Kosher salt
Freshly ground pepper
Place potatoes, leeks, and 1 cup of the broth in an 8-cup glass measure or bowl. Cover tightly and cook at 100% power in the microwave for 12 minutes.
Remove from oven. Uncover and pass through a food mill fitted with a medium disc, or through a potato ricer (K’s note: I use an immersion, or stick, blender). Stir in cream/milk, butter, and remaining 1 cup broth. Season with salt and pepper. Heat in a 2-quart soufflé dish, covered tightly, for 5 minutes. Serve piping hot.
From Karen: You can use more potatoes and leeks, but be careful about adding more broth, so it doesn’t get too soupy. It’s also not necessary to completely blend the potatoes; it’s nice to have some chunks. This reminds me strongly of the old frozen Campbell’s potato soup we used to have when I was a kid. I use red potatoes because they seem to have the best flavor.

Looks delicious, Lorraine. :) I'd love to have a slice. And you did exactly what my childhood friend Nancy does when she cooks. Nancy has become a gourmet cook over the years by cooking and experimenting and using her instincts. And she comes up with these divine dishes where she started off with a little this and little that she already had and always uses leftover broth or soup as stock in a new dish,simmers it down, and voila! Just like you did. So. . .keep it up, girl.

What a lovely post, Lorraine! I felt I was along for the ride to the market and I can taste that pie.

Love the idea of using leftover soup in a pie, too.

My stomach just growled. Mmmm. And I love your baking dish. I have a bunch in different sizes.

I love leeks and I first discovered them when I bought some "roasted root vegetables" at the deli counter at Whole Foods in Fort Lauderdale. We have a microwave in the condo (but no oven) so we do a lot of take out. The roasted vegetable tray was so terrific, I make it at home all the time. I have to tell you, I have a CRAVING for a cider donut since I read this post!!

It all sounds delicious, and yes, I do like leeks. I never follow a recipe, I just toss things in the pan and it is almost always good.

OMG t was good! I'm positive it was because I used the soup as the base for the gravy. Yum. Alas ... the leftovers are now gone.

Mr. L was lamenting that the cider doughnuts are only seasonal.

I'm getting better at cooking by instinct. I usually try to make the recipe as directed first, but then wing it. Except for cakes and cookies. Winging it could be disastrous for that. : )