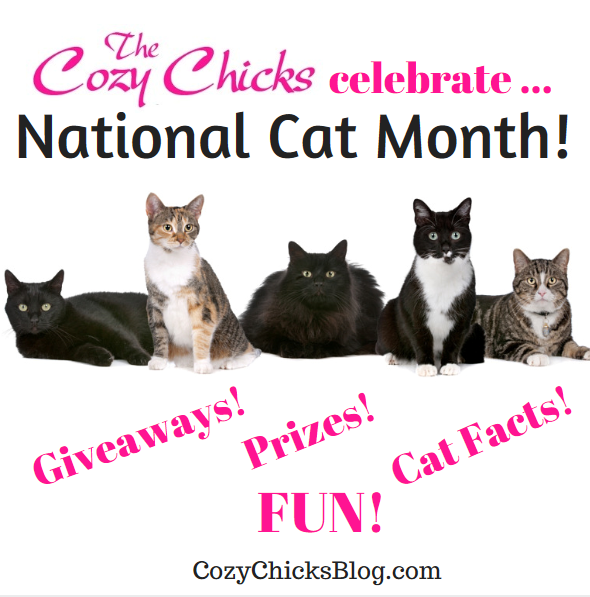 In honor of National Cat Month, I decided to run a piece I wrote for USA Today a couple of years ago. Many of you will remember these charming mysteries with cats and you'll be happy to know that these same authors continue to feature cats in their current novels.
So here goes, a look back at some delightful cat mysteries from 2012.
Jugs, a chubby feline based on the author's adored cat, Boomerang.
Miss Marple, a savvy cat who enjoys napping in the Haven't Got a Clue bookstore. 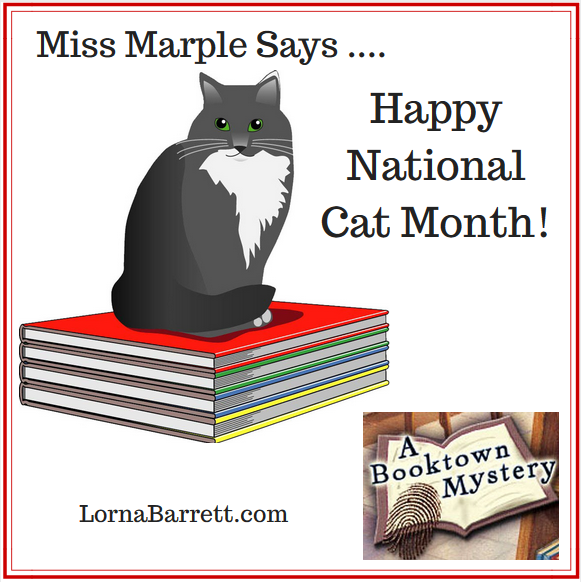 Merlot, Chablis and Syrah, three delightful felines who star in the Cats in Trouble series. 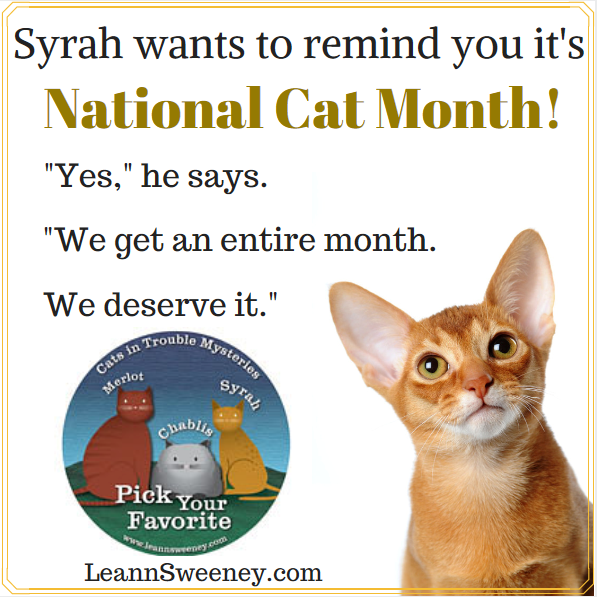 Cats featured prominently in the 2012 crop of cozies. Clever, alert and intuitive, they often provided assistance in solving crimes and always offered a serene, comforting presence to their owners.

In WHAT THE CAT SAW, by Carolyn Hart, Nela Farley makes an interesting discovery when she agrees to care for a highly intelligent cat named Jugs. Whenever she look into the cat's beautiful eyes, she "moves into his mind," and immediately receives messages about a murder he witnessed.

In THE CAT, THE WIFE and THE WEAPON by Leann Sweeny, heroine Jillian Hart creates cat quilts. She has three constant companions, Merlot, a red Maine coon cat, Chablis, a seal point Himalayan, and Syrah, an Amber Abyssinian. She refers to as her cats as her "four-legged assistants," and she's convinced that they sense her feelings. She's adept at reading their body language and she trusts their intuitions about people. 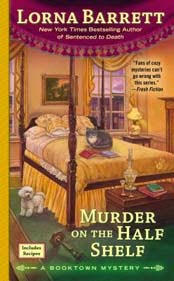 In Murder on the Half Shelf, Lorna Barrett delivers another exciting release in the Booktown Mysteries. Tricia Miles, the owner of the Haven't Got a Clue bookstore in Stoneham, N.H., owns a lovely feline named Miss Marple. Miss Marple can nudge Tricia's attention to a clue by merely gazing steadily at it and her interest in a cocktail napkin proves to be relevant to the case. 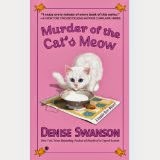 In Murder of the Cat's Meow, Denise Swanson based the feline character, Bingo, on her lovely real-life cat, Boomerang. In the 15th release in the popular Scumble River series, Skye Denison, school psychologist, investigates the murder of a judge at a cat show. The behind-the-scenes details about cat shows and cat fanciers are exciting and will appeal to anyone who loves felines. And the murder method is unique--death by catnip mouse!
Why are cats so popular in mysteries? Why do people rely on their intuitive responses? As Carolyn Hart says, "No one can fool a cat. A cat always knows exactly what someone thinks and feels."

In my own Dream Club series, I feature two cats, Barney and Scout, but I have to admit that they have no magical powers, no amazing insights and no detective skills. They are just lovable lap cats, the kind that Gallagher describes as "pillows that eat." I hope you'll share some of your own favorite mysteries featuring cats. I know a lot of you know and love cats and I always enjoy hearing about your delightful fur babies.
Mary Kennedy
Posted by Dr. Mary Kennedy at 12:00 AM

I know all These cats!

Me, too! Hoping Carolyn Hart continues her Nela Farley series!

Hi Stephanie, thanks for stopping by, glad you like mysteries with cats.

Hi Linda, I do, too. It was the start of a wonderful serie.

Hi Denise, happy to! Hope everyone checks out Murder of a Needled Knitter, the latest in your Scumble River series

Thanks, Mary, I love cats in cozies. I have Nightmares Can Be Murder and hope to start reading it soon.

As I started to write this, my cat jumped up on the chair and then to the desk so he could get my attention (he's hungry but can't eat until his pill is partially dissolved in his tummy). Anyway, in addition to the cats/owners you mentioned, how about Sofie Kelley/Sofie Ryan who has cats in both of her series; the Dixie Hemingway pet sitter series by Blaize and now John Clement; Diane Kelly; Miranda James; and Sheila Connolly's Orchard Mystery series (goats and a dog also)?

HI Patricia, hope you enjoy it, thanks so much for stopping by!

Those are wonderful choices!! I love all those series, going to write a follow-up piece, you have inspired me!! It's amazing how many cozy mysteries have cats (and other pets). I definitely need to write about this again, thanks for stopping by!

I am right there with you..and I would be hard pressed to choose a favorite..in any of them...love them all.Georgette

I wrote the original "Mysteries with Cats" piece for USA Today two years ago, and looking through current book lists, it's just amazing how many new series have been started. Dozens! And the old favorites are still going strong, which is good.

There are so many wonderful literary cats out there! I'll name just a few who haven't already been mentioned (but I must mention Owen and Hercules again! I love those Magical Cats from Sofie Kelley). Don't forget Mrs. Murphy and Pewter from the Sneakie Pie Mystery series by Rita Mae Brown, Koko and Yum Yum from The Cat Who Mystery series by Lilian Jackson Braun, Evinrude and Sparky in Lucy Burdette's Key West Food Critic Mystery series, Twinkletoes in the Paws and Claws Mystery series by Krista Davis...and I could go on! lol There are also cats I've been waiting to meet-on my TBR pile are Quincy from the Fat Cat Mystery series, Eddie in the Bookmobile Cat Mystery series and more!

Rita Mae Brown's series is actually called the Mrs. Murphy mystery series-Sneakie Pie is her co-author...who happens to be a cat!

HI Katreader, these are fabulous suggestions, thanks! I see I have my work cut out for me :-)

Love this topic, and all those smart, intuitive and sometimes magical cats.
They do make for handsome cover models as well.

They really do!! I can't resist a mystery with a cat and I'm so glad other people feel the same way!

Hi Malke, thanks for stopping by! Glad you found some new authors on the list.

Thank you, Mary, for including What the Cat Saw. Cats,as all cat lovers know, see everything. They know when all is well. They know when something is wrong. We have had many wonderful cats. Our amazing brown tabby Sister sees me as her personal charge. She escorts me up and down the hall, stays near at all times, and her affection adds joy to every day.