Which Is Smarter -- Dog or Cat? 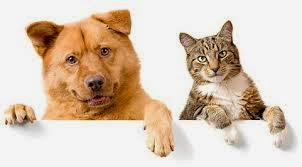 Nothing like starting a heated debate. Sorry. I couldn’t resist, especially because we're celebrating National Cat Month at the Cozy Chicks and because I read a fascinating article* on cat vs. dog intelligence. I’m betting that you feel one way or the other based on whether you’re a dog person or cat person. If you have both types of pet, you still may favor one over the other. We'll just see about that.

To be honest, because dogs and cats are two different species, it’s not really fair to compare them. According to Psychology Today: “Dogs are designed to be more efficient runners while cats have better ability at manipulating things with their paws. Thus a test that involved pulling strings or operating levers would tend to favor a cat, while a test involving moving from place to place, where speed is a measure of performance, would favor a dog.

If you judge by number of neurons in the brain, then cats win. They have 300 million neurons in their cerebral cortex, the area responsible for processing, problem solving and perception, while dogs have 160 million.

However, if you judge by  the “Encephalization Quotient” (EQ) a tool to compare intelligence and brain weight in relation to an animal’s body size, then dogs win because social animals (dogs) tend to have higher EQs than solitary animals (cats.) Because dogs have had to learn over time to interact with humans, they have had to develop more problem solving and communication skills.

The fact that dogs can sort objects into categories (demonstrating abstract thought) and can tell what people are thinking are indicators of their intelligence. Yet researchers have shown that cats can be trained to do similarly impressive feats, like distinguish between different quantities of objects and follow pointing gestures (like dogs).

Oxford University researchers believe that dogs are becoming progressively more intelligent because of the demands of humans, while cats have stayed mostly the same. “At the risk of starting another argument, these data may explain why we never hear about such things as a ‘seeing eye cat,’ ‘police cat’ or ‘search and rescue cat.’”

To be fair, however, they admit that it wasn’t easy to get the cats to display their talents. In the case of distinguishing between different quantities… this is an ability that fish also possess, and the researchers said it was far “easier to work with fish than cats.”  That made me laugh because it’s so true. Maybe cats have the same abilities but just aren’t in the right mood to display them. Ever.

Another interesting item: “The research also showed cats and dogs can solve simple puzzles to get food, but when the puzzle is unsolvable, dogs will look to humans for help, whereas cats will keep trying,” Isn’t that the truth?

Charles Darwin wraps up this discussion nicely:  ‘Intelligence is based on how efficient a species became at doing the things they need to survive.’  Basically then, all species that stay healthy, remain numerous and avoid extinction are equally intelligent.

Does that end the debate?

I have a dog and two cats. I love them all SO much, but neither my dog nor my cats would win an intelligence contest. I think cats and dogs are smart in their own ways, like you stated above. One of our cats is a master hunter. He doesn't go outside, but in the summertime he likes to sit on our screened in porch. Bugs do get in, but they don't get out because he gets them. His agility is amazing. He will jump straight up into the air from a seated position and snatch the fly right out of the air. Does that make him smarter than my dog, who never quite learned how to catch a ball? Maybe...but maybe not.
I like to think of the Albert Einstein quote...'Everybody is a genius. But if you judge a fish by its ability to climb a tree, it will live its whole life believing that it is stupid.' I think that's pretty fitting in this comparison question :) But it is a fun debate, I agree! And usually cat people think cats are smarter and vice versa for dog people. However, I love dogs and cats equally and I do think that both species has their own remarkable talents.

Both are pretty intelligent. They've trained humans to take care of most of their needs.

I love the Einstein quote, Katherine. Thanks for adding it to the "debate."

Isn't that the truth!

Samoid is a dog breed, isn't it?

I think they are both pretty canny when it comes to getting us to give them what they want. Maybe they are both smarter than us but we are pretty trainable! I was never an animal person at all until we got our dog and now I am at his beck and call. Then I met a few cats over the last few years and if they lived with me I would probably be doing their bidding as well. Fun topic.

Chimps are supposed to be nearest to humans in intelligence. But if a human points at something the chimp will not understand what the gesture means. Dogs understand. That is a sign of the ability to learn. But, that is probably because by nature, dogs are attuned to humans. Cats may love their humans, but they are well aware that if the need ever arises, they can rule the world without us.

I'm more of a cat person, but I will admit some animals are smarter/dumber than others in their species. My boss has a dog who never has mastered the game of fetch, whereas a friend's cat loves to play fetch.

I agree. Then again I find animals fascinating.

You got it, Annette. If cats are smarter, they know it and don't have anything to prove.

I had a Russian Blue cat who would fetch. He was a really smart cat in all ways, and had many dog characteristics.

So true! That's why I love that sign, "Dogs have owners. Cats have staff." lol We had dogs when I was growing up and of course I thought they were brilliant. I've had two (2) cats as an adult and they definitely trained me to make them exceedingly comfortable during all the years we shared together. But for dogs & cats - The best of their intell is the unconditional love they bring to us all. What would we do without it? xoxoxoxo

Good topic Kate. I know people who are either cat or dog people and they will argue you to death about how cats or dogs are more intelligent. I have had both dogs and cats throughout the years, but I am admittedly more of a cat person (I foster cats/kittens). But my preference for cats really has nothing to do with their intelligence. For me, now that I'm retired, cats are just easier. No bathing, no walking, and when I have to go away over night, I leave them plenty of food/water and a litter box and they are fine.

Years ago I had a shepherd/collie mix who was extremely intelligent. I currently have two cats (rescued Siamese mix siblings). My female is agile and intelligent. Her brother is clumsy and not the sharpest tack in the wall (I call him my big doofus).

I had a Russian Blue who loved to play fetch, too! His name was Faust because he behaved as if he had made a deal with the devil. He was the most dog-like cat I've ever known, and smart as a whip. My dog? She may be smart, but it's not her intelligence I love so much--it's her devotion and the unconditional love she gives back to me!

I have a feeling that cats could show their intellectual abilities, but just don't care what humans think of them and just do whatever they want to do! Pretty smart to me!

I think she means Samoyed, which is a breed of dog.

Of course, my Schipperkes (a breed of dogs) would say that dogs are more intelligent. I am not a cat person. I have had one cat in my lifetime and do not want another. While my cat was intelligent, she didn't care about me as much as my dogs do. I find dogs very intelligent and especially good at problem solving.

Thanks for the info, Marlene.

I've had many many cats and a dog over my lifetime, and each cat had a different personality. Some wanted lots of affection and would follow me like a dog, and some wanted minimal physical contact but liked to be nearby. You have to like that independent personality to live with a cat.