* * * * * * * * * *
Welcome to Dru's Cozy Report: October 2014. This month we have two recently released new series for your reading pleasure and three mentions that are getting rave reviews. Enjoy! 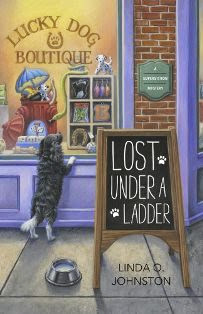 Is it Luck? Or is it Destiny?

Rory Chasen never thought superstitions were real—until her beloved fiancé is killed after walking under a ladder. To find closure and the truth about superstitions, Rory takes her dog Pluckie to a town called Destiny, where superstitious beliefs are a way of life.

Rory’s visit to Destiny takes an unexpected turn when Pluckie saves Martha, the owner of the Lucky Dog Boutique. While Martha recovers, Rory reluctantly agrees to manage the pet shop for her. But when Martha becomes the prime suspect in the local bookshop owner’s murder, Rory can’t believe that the sweet old woman would do it. Convinced the real killer is still roaming Destiny’s streets, Rory resolves to crack the case before Martha’s luck runs out.

Do you believe in superstitions? In this new series by Linda O Johnston, she takes us to Destiny, California to see if the rumors are true. What we find is a charming and delightful tale featuring Rory and her furry friend Pluckie who plays a pivotal role in this light and fresh whodunit. The author did a great job in setting up the scenes where a murderer hides in plain sight and I enjoyed watching it all come together. With a likable cast and the idiosyncrasies and uniqueness of this small town is a perfect fit to this entertaining series. 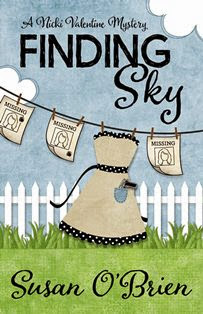 She’s a parent. She’s (almost) a P.I. No one gets on your case like mom. Suburban widow and P.I. in training Nicki Valentine can barely keep track of her two kids, never mind anyone else. But when her best friend’s adoption plan is jeopardized by the young birth mother’s disappearance, Nicki is persuaded to help. Nearly everyone else believes the teenager ran away, but Nicki trusts her BFF’s judgment, and the feeling is mutual.

The case leads where few moms go (teen parties, gang shootings) and places they can’t avoid (preschool parties, OB-GYNs’ offices). Nicki has everything to lose and much to gain — including the attention of her unnervingly hot P.I. instructor. Thankfully, Nicki is armed with her pesky conscience, occasional babysitters, a fully stocked minivan, and nature’s best defense system: women’s intuition.

From the start, Susan O’Brien fresh new drama pulled me in immediately and quickly became a page-turner, as I had to know it was going to end and boy was it worth the wait in this pleasantly appealing debut novel. This was a good mystery that kept me busy sifting through the clues as I followed the twists and turns that the author presented to deter my own sleuthing. Surrounded by a diverse cast of characters and engaging dialogue, this was a very enjoyable read and I can’t wait to see what new exciting cases await Nicki Valentine. 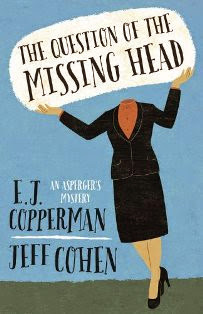 Samuel Hoenig answers questions for a living. And as a man with Asperger’s Syndrome, his unique personality helps him ferret out almost any answer there is. But his latest question is a rather odd one—who stole a preserved head from the Garden State Cryonics Institute?

Arriving at the scene of the crime accompanied by his new colleague, Ms. Washburn, Samuel finds that what started out as a theft has escalated to murder. With suspects and motives emerging at a rapid rate, one final question remains—can Samuel’s powers of deduction uncover a killer in the face of overwhelming odds? 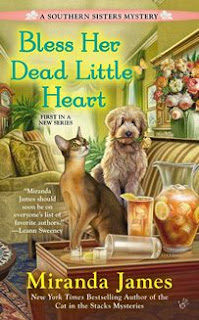 New York Times bestselling author Miranda James returns to Athena, Mississippi, with an all-new mystery featuring Miss An’gel and Miss Dickce Ducote, two snoopy sisters who are always ready to lend a helping hand. But when a stressed socialite brings murder right to their doorstep, even they have trouble maintaining their Southern hospitality.

With the Mississippi sun beating down, An’gel and Dickce are taking a break to cool off and pet sit their friend Charlie Harris’s cat, Diesel, when their former sorority sister, Rosabelle Sultan, shows up at their door unexpectedly, with her ne’er-do-well adult children not far behind.

Rosabelle’s selfish offspring are desperate to discover what’s in her will, and it soon becomes clear that one of them would kill to get their hands on the inheritance. Suddenly caught up in a deadly tangle of duplicitous suspects and deep-fried motives, it will take all of the sisters’ Southern charm to catch a decidedly ill-mannered killer. 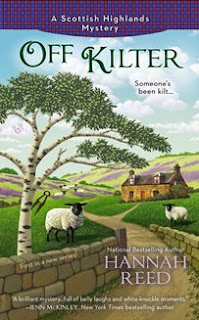 National bestselling author Hannah Reed brings mystery lovers the first in a brand-new series, in which a young writer finds herself swept up in a murder amidst the glens and lochs of the Scottish Highlands.

After the recent death of her mother and the dissolution of her marriage, thirty-something Eden Elliott is seriously in need of a fresh start. At the urging of her best friend, bestselling author Ami Pederson, Eden decides to embark on an open-ended trip to the picturesque village of Glenkillen in the Scottish Highlands, to do some hands-on research for a book of her own. But almost as soon as Eden arrives in the quaint town, she gets caught up in a very real drama.

The town’s sheep shearer is found murdered—clipped with his own shears—and the locals suspect Vicki MacBride, an outsider whose father’s recent death left her the surprise heir to his lucrative sheep farm. Eden refuses to believe the affable heiress is a murderer, but can she prove that someone is out to frame her new friend before she finds herself on the receiving end of more shear terror?

These are fantastic choices, Dru, you always keep us up to date. I see my favorite authors on this list! The only author who is "new" to me is Susan O'Brien and I will be sure to put her on my TBR pile. Thanks so much for posting this! Love your recommendations.