It's National Cat Month and Mine Won't Let Me Forget

October is National Cat Month and I have two cats who won't let me forget--and of course the fictional ones are meowing in my head, too. But of course, every second of every minute of every hour of every day is Caturday, but I believe the cats got together to make sure they had a celebration worthy of them.

So, I thought I'd share with you pics of the cats who have owned me for the last twenty years. Three of them have crossed the Rainbow Bridge and I miss them so, but they all lived a good long time.

Starting with the youngest and still with us, we have Marlowe named after Philip Marlowe. He's an epileptic kitty with other neurological issues but we love him no matter what. He does have those eyes in his favor. Love his sweet face and the way he fights every day to stay with us. What a little tough guy! 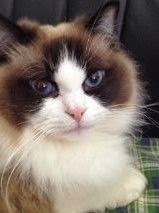 Next is Wexford, who is three and named after Inspector Wexford in Ruth Rendell's  long-running British mystery series. Wexford is a scaredy cat but he loves his new home. A lot of bird watching is going on this cat month. He's also very affectionate and definitely a momma's boy. 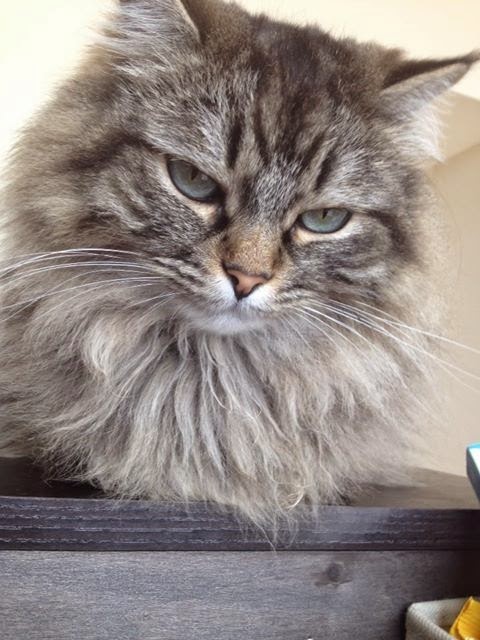 Simone is my grandkitty, so he doesn't live with me but a friend and I rescued him. He was trying to survive outside after having been declawed. Not a good thing for him, but so lucky for my daughter and son-in-law who adore him. He's Persian and has had heart and kidney issues but manages to pull through every crisis, We don't know how old he is, but I'd say older than 10 by now since he's having dental problems, too. 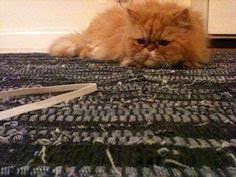 Archie Goodwin was a baby I rescued him from a grocery store parking lot on a roasting hot day in Texas 16 years ago. He was already FIV positive, but lived to be 14. When that Christmas tree skirt came out every year, he was the first to claim it. Such a handsome boy! 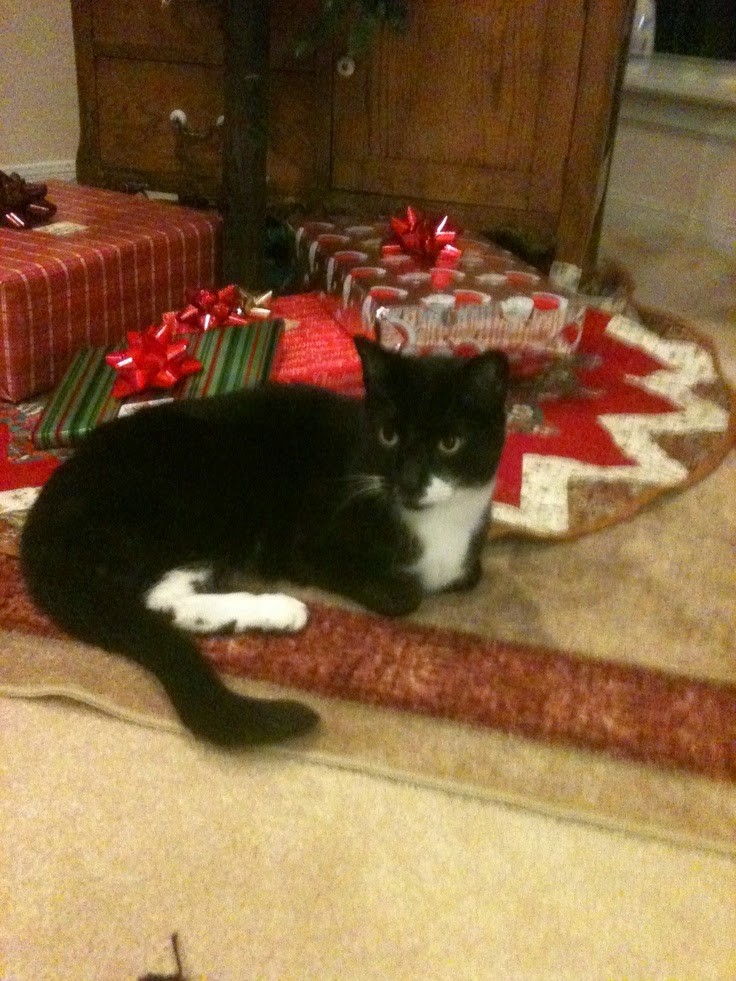 Agatha Christie was a tiny exotic shorthair who I felt was being abused by a person who showed cats. She had ear mites that took two years for me to clear up and was covered in fleas. What kind of a breeder allows that to happen? I called her Aggie the toy hog. She was diabetic and developed an untreatable abscess on a kidney and died when she was 16. The diabetes was hard to deal with because she was so small, only 5 pounds full grown. She loved to sit next to me every day while I was writing. Last but not least, my beloved Indigo. How I adored that mischievous smarty pants. She was struck by an aggressive cancer when she was 17 and so, a kitty who had never been sick a day in her life, was gone within two weeks. I kept her home and was with her when she took her last breath. She and all the rest of these babies will live in my heart forever, so National Cat Month at my house is for all of them. 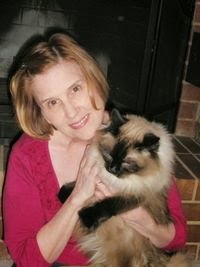 Feel free to tell me about your fur friends and share pictures. After all, National Cat Month only comes around every day!

So nice to see pictures of your babies. I've heard you talk about them but I can't remember seeing pictures of Archie, Aggie or Indigo but they are all gorgeous kitties (I LOVE Aggie sweet little face). It's amazing the joy our furry babies can bring. I can't imaging not having had them in my life.

I've always had cats, but at one point, I went temporarily over to the dark side and had my dog, Lobo (a beautiful shepherd/collie mix) for 14 years. Shortly after he passed, the neighbor's cat (who was not being cared for) had a litter in my garage. I raised them and found them homes, but kept one - my sweet Mittens. She was part Maine Coon and looked a lot like your Wexford. She was always shy and most of my friends never saw her. Mittens, was polydactyl (her paws looked like little mittens), and was with me 20 years before she had a stroke. I was devastated.

I was going to wait a bit to get another cat, but just couldn't handle coming home to an empty house, so I ended up with my current spoiled furbabies. They are Siamese mix siblings who will be 5 years old next week. Socrates (aka Socks) - a short haired snowshoe - is big (14 pounds) and clumsy, and not the sharpest tack in the wall. But he is my big dufus and I love him to pieces. His sister, Princess Isabella (Bella), is smaller (8-9 pounds), with long hair and looks like a himalayan - similar to your Indigo (as a matter of fact, "mischievous smarty pants" is a pretty good description). Bella is agile and smart and definitely rules the house.

All our best from Socks, Bella and I to you, Wexford and Marlowe (and grandkitty Simone)!

Thanks Lynda! Back at you. What a great service you do for so many cats. They're just such an important part of our lives! My two are hissing (nicely) at yours. It always takes a bit of time to share even cyberspace. :-)

This is such a wonderful post and I loved hearing about your sweet kitties, Leann. It's definitely National Cat Month every day in your house and mine!

Awww... What a lovely post. I LOVED meetin' all your fur-babies. All so beautiful...

Thanks Mary. We have saved our share of kitty cats and love them dearly!

Thanks Nissy. I hope you are celebrating in grand fashion!

Thanks for introducing your kitties. Currently, I live with Aleister, Calumet, Licorice, and Mariusz. Playing at the Rainbow Bridge are Kokishin, Bandit, and Seneca. (I also have furkids of different species with me now and at the Bridge).

Thanks Katreader! What wonderful names and I know your friends are playing with mine on the Bridge! I have a dog who thinks she's a cat considering how much cat food she steals on a regular basis. And plenty of other canine friends playing on the Bridge as well. Miss them all!

Love your furbabies !! Have followed Marlowe since you were blessed to be together and adore Wexford for his kindness. Thank you for sharing the others, too !!!!

Thanks so much Traci! Marlowe is my sweet, tough little guy and he would be lost without his big brother!

Happy National Cat Month from my rescues...Tyler Rose, Maggie Mae, Webster Alvin, Diego & Dewy with me now. And, Nicky, Cici & Sassy plaing at the Rainbow bridge. Love them all.

Thanks Linda! Wexford and Marlowe are waving a paw. Indigo, Archie and Agatha are playing with your babies on the Bridge!

I love this post, Leann! Beautiful kitties all. I now have a crush on this Archie Goodwin too.

Thanks MJ. I miss my Archie all the time--and he always looked so handsome in his tuxedo. :-)

Thanks so much, Patricia!

Your post brought tears to my eyes. I live in a house now with 4 dogs and 5 cats, but the thought of the ones I have lost always causes a catch in my throat.
Lovely post.

Thanks so much, Kim. I have a hard time thinking about my three who all died within 18 months, but sharing them helped me. :-)