WHY ARE WE CELEBRATING COLUMBUS DAY AGAIN?? 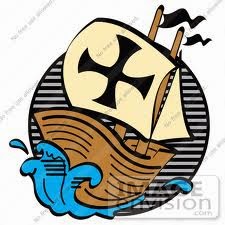 For your entertainment and in honor of Columbus Day, which the US has celebrated since 1937, I did a little research  -- and came away scratching my head. Because in fact there's not much of a reason to honor Señor Columbus.

First of all, he was not the first to believe his ship wouldn't fall off the end of the ocean. Most educated Europeans of his time already knew the world was round.

Second, a number of other explorers landed on the continent before Chris did. He actually bumped into it while trying to reach the East Indies, which is why it is believed he called the native Americans "Indians." He didn't even know this great big continent existed. A geography scholar he was not.

Third, he wanted to enslave the natives and actually took some back to Spain with him, where they were displayed on the streets of Barcelona and Seville.

So whose idea was this holiday anyway? And why do we keep celebrating it? Or do we? Bankers no longer get it off. Do you?

Here are what some famous people had to say about the man, courtesy of Maria Vultaggio, vultaggio@ibtimes.com.

“Perhaps, after all, America never has been discovered.  I myself would say that it had merely been detected.” -- Oscar Wilde

“Christopher Columbus, as everyone knows, is honored by posterity because he was the last to discover America.” -- James Joyce

“If aliens visit us, the outcome would be much as when Columbus landed in America, which didn’t turn out well for the Native Americans.” -- Stephen Hawking

“When asked by an anthropologist what the Indians called America before the white man came, an Indian said simply, ‘Ours.’” -- Vine Deloria Jr.

“If Columbus had an advisory committee, he would probably still be at the dock.” -- Arthur Goldberg

AND MY FAVORITE: “America had often been discovered before Columbus, but it had always been hushed up.” -- Oscar Wilde

My question to you is, should we keep honoring this explorer or should we give the distinction to a true American hero? And who would you pick for that?

Some cities are changing this already, to honor the people who called it "ours". :-)

Terrific post, Kate! And some wonderful (and ironic) quotes, love them!

I thought they were funny. Thanks, Mary.

Many of Columbus's crew were ready to mutinany because he was such a horrific leader. He actually landed in the Caribbean, not the main continent. He gave the Caribs blankets infested with small pox and tried to set himself up as king. Caribs were forced to bring a certain amount of gold each week and if they didn't, Columbus cut off one of their hands. All in all, not a nice guy. We should celebrate America Vessupi instead.

Columbus, like so many others, just had a better PR person.

Oddly enough, I've always wondered why we celebrate Columbus day. I think today, it's an excuse for retailers to have another SALE, like they need another excuse. But the irony is, it sugar coated in the history books that our children read today. Not that I want them to read some of the gory details of our history when they are small but there's this huge reality that is unknown to young American's of how terrible some of these people were at the time. But who am I to say, there are people just as terrible, if not worse using their religious beliefs to inflict mass murder on people who don't believe in what they believe today. It's sad how history has a tendency of repeating itself. Great post. They give me something to look forward to every Monday.

and give up a holiday, don't be silly. I've had the opportunity to crew aboard the replica Nina, and it was still quite an accomplishment to sail these "ships" designed as coastal trading boats into the open oceans. The Nina was approx 60' in lenghth. No mechanical stearing. She was steared manually by a helm. The below deck area was used for storage so the crew spent the entire trip on deck, average age was 15 with as young as 8 working bucket brigades to drain water from below. I could go on and on. Even though Columbus probably does not deserve all of his recognition, it still was a remarkable trip,

When I was working, we got Columbus Day off, which was the only reason I appreciated the day. However, in our family, we do not honor Columbus. As many of the examples you mentioned show, what he did was not heroic. Being part Native American, Columbus is not a favorite in our family. Some of my family members get rather vocal when people bring up his "accomplishments". My niece has a Tshirt with several Native Americans on horseback, looking over the land, with the wording "The original founding fathers"

Many places are doing away with the celebration of Columbus Day. When I worked for the State of California, they proposed doing away with having Columbus Day as a paid holiday (trying to save money), but there was so much backlash from groups of Columbus supporters who argued that if they do away with Columbus Day then they should eliminate other holidays like Cesar Chaves Day, Martin Luther King Day, etc. They made it an issue of race rather than accomplishments. It was such a mess that the State dropped the idea and kept the holiday. Like so many issues, it really all just gets down to politics.

I've read that it is the United States day of mourning for all that has been done and is being done to Native Americans. As a person born here, I never before paid much attention to the holiday; it just was. I can support it as a Day of Mourning, and a day to remember to be and do my best for everyone. Zena Weldon

Let's be honest. Since Columbus came and brought the rest of Europe with him, it was devastating to the American Indians, (by far their preferred title except distinction among the tribes and clans).But we also have to be honest enough to admit that the world runs on the cultures developed in Europe,(which began in the Middle East), so Columbus Day had/has some meaning, but really. I think George Washington should have his own day back, flawed as he was, it was his leadership that won the Revolutionary War... something I only recently realized

Very intesting, Annette. Certainly not taught in our history lessons.

Thanks, Amy. Another fact that I learned is that Columbus Day is celebrated in a few other countries, too. Can't remember which, but it can be googled under "Columbus Day Facts."

Fascinating info, Robert. Maybe we should have a navigator recognition day for all the earlier men who "discovered" land.

What a sad statement that is. And politics is all about money and votes. And there you have it. We're stuck honoring a man who sailed a ship across a large, dangerous amount of water, as did so many others.

I've never thought of it that way, Zena. I suppose if it hadn't been Columbus, it would've been someone else given the "honor." And I suppose it was inevitable that this continent would've been found by the Europeans. What a sad destiny for American Indians though.

Isn't it odd that Washington and Lincoln, two great figures, were smushed together and one so-so navigator still gets his own day.

As a couple others have said, some cities such as Seattle, Minneapolis and Berkley (CA) -- as well as the state of South Dakota -- have renamed the day as Indigenous Peoples Day, to celebrate the native tribes that were here first. I'm all for that, seeing as Columbus didn't actually "discover" America, wasn't the first explorer to bump into the continent, and considering what was done to the people already here.