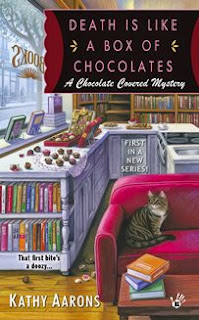 Best friends Michelle Serrano and Erica Russell are celebrating the sweet rewards of their combined bookstore and chocolate shop by hosting the Great Fudge Cook-off during the town’s Memorial Day weekend Arts Festival. But success turns bittersweet when Main Street’s portrait photographer is found dead in their store, poisoned by Michelle’s signature truffles.

As suspicion mounts against Michelle, her sales begin to crumble and her career seems whipped. With Erica by her side, Michelle must pick through an assortment of suspects before the future of their dream store melts away…

I enjoyed this tantalizing sweet whodunit that whetted my appetite for chocolate and murder. With a scattered list of suspects, it was easy to succumb to the early clues but once the story moved forward, the killer’s identity inch closer as suspect after suspect were alibied. The author did a good job in presenting a well-fermented drama that was easy to follow with the perfect backdrop of a bookstore and chocolates. There’s a backstory between Erica and Bobby that I can’t wait to read more about and the possibility of a romance blooms for our heroine. Boasting a lovable cast of characters and engaging dialogue, this delectable treat is a welcomed addition to the cozy genre. Bonus chocolaty recipes are included. 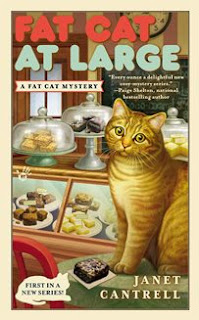 The jig is up for Chase’s adorable plus-size cat, Quincy. His new vet says “diet”—that means no more cherry cheesecake bars. From now on he gets low-calorie kibble only. But one taste of the stuff is all it takes to drive him in search of better things. Quincy’s escape is the last thing Chase needs after the nasty run-in she has with underhanded business rival Gabe Naughtly.

Chase tracks Quincy down in a neighbor’s kitchen, where he’s devouring a meatloaf, unaware of the much more serious crime he’s stumbled upon. Gabe’s corpse is lying on the kitchen floor, and when Chase is discovered at the murder scene, she becomes suspect number one. Now, with a little help from her friends—both human and feline—she’ll have to catch the real killer or wind up behind bars that aren’t so sweet.

This was a fun read that kept my interest from beginning to end. The mystery was teasingly adventurous from the suspects, to the interaction between the cast and to the frequent surprise mentions of fictional characters from cozy series that I read. I love the way the story flowed and the comfortable tone that created a lovely atmosphere as the story moved forward. Chase is great character and I would like to know more about her and Anna and Julie. Quincy adds a dash of excitement with his escapes and discoveries in this debut novel. I look forward to more good times and murder with the next book in this delightfully appealing series. Recipes for both human and furry friends are included. 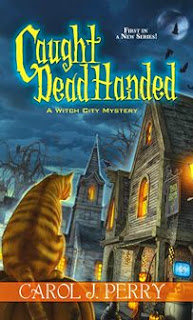 Most folks associate the city of Salem, Massachusetts with witches, but for Lee Barrett, it's home. This October she's returned to her hometown--where her beloved Aunt Ibby still lives--to interview for a job as a reporter at WICH-TV. But the only opening is for a call-in psychic to host the late night horror movies. It seems the previous host, Ariel Constellation, never saw her own murder coming.

Lee reluctantly takes the job, but when she starts seeing real events in the obsidian ball she's using as a prop, she wonders if she might really have psychic abilities. To make things even spookier, it's starting to look like Ariel may have been an actual practicing witch--especially when O'Ryan, the cat Lee and Aunt Ibby inherited from her, exhibits some strange powers of his own. With Halloween fast approaching, Lee must focus on unmasking a killer--or her career as a psychic may be very short lived. . .

This was a fun book to read that was filled with suspense and intrigue. Is she or is she not? That’s the question I had as I followed the actions set forth by Lee as well as the clues in drama that was hard to put down. The author did a great job in the presentation of this novel, where nothing is as it seems and until you got closer to the end, did I suspect what I thought I knew. I Lee is a great heroine as is her aunt Ibby. The addition of O’Ryan and Pete rounded out the cast that supported them. Boasting engaging dialogue and the perfect background setting of Salem, MA and Halloween, this was a very enjoyable read and I can’t wait to read the next book in this wonderfully crafted series.

These look wonderful, Dru! The start of a new series is always exciting, looking forward to reading these.

Thanks, Dru...love your Fb page!

I got my hands on the ebook version of Caught Dead Handed after I read the review ... and I couldn't put it down until I was through with it ... thanks for the review, I wouldn't have found the book without it.

I love seeing these three together. Thanks, Dru!

What a great crop of new books! Thanks, Dru. It's always great to have you here.