I love being behind the camera, but I hate having my picture taken. I like seeing pictures of myself when I was a lot thinner. (Well, except for wedding pictures.  Then I was TOO thin.  We're talking skull head.)  Still ...

There were times when I should have had my picture taken and didn't.  Like with my Dad at the nursing home.  I remember his last good day.  The physical therapist was taking pictures of him and my mom and I said, "No!  I'm too fat."  So now I don't have a picture of me and my Dad on his last happy day.

I had an epiphany earlier this year when I realized there are virtually no casual pictures of me from the last ten or more years.  (There aren't any professionally taken pictures, either.)  I'm not thin enough. I'm having a bad hair day.  I LOOK MY AGE. (That's the killer right there.)  But then ... I realized that, well, pictures are part of life.  Hey, back in the Victorian age, pictures were also a part of death.  Is there anything sadder than the family scraping together their pennies so they can have a picture of their only (and deceased) child? 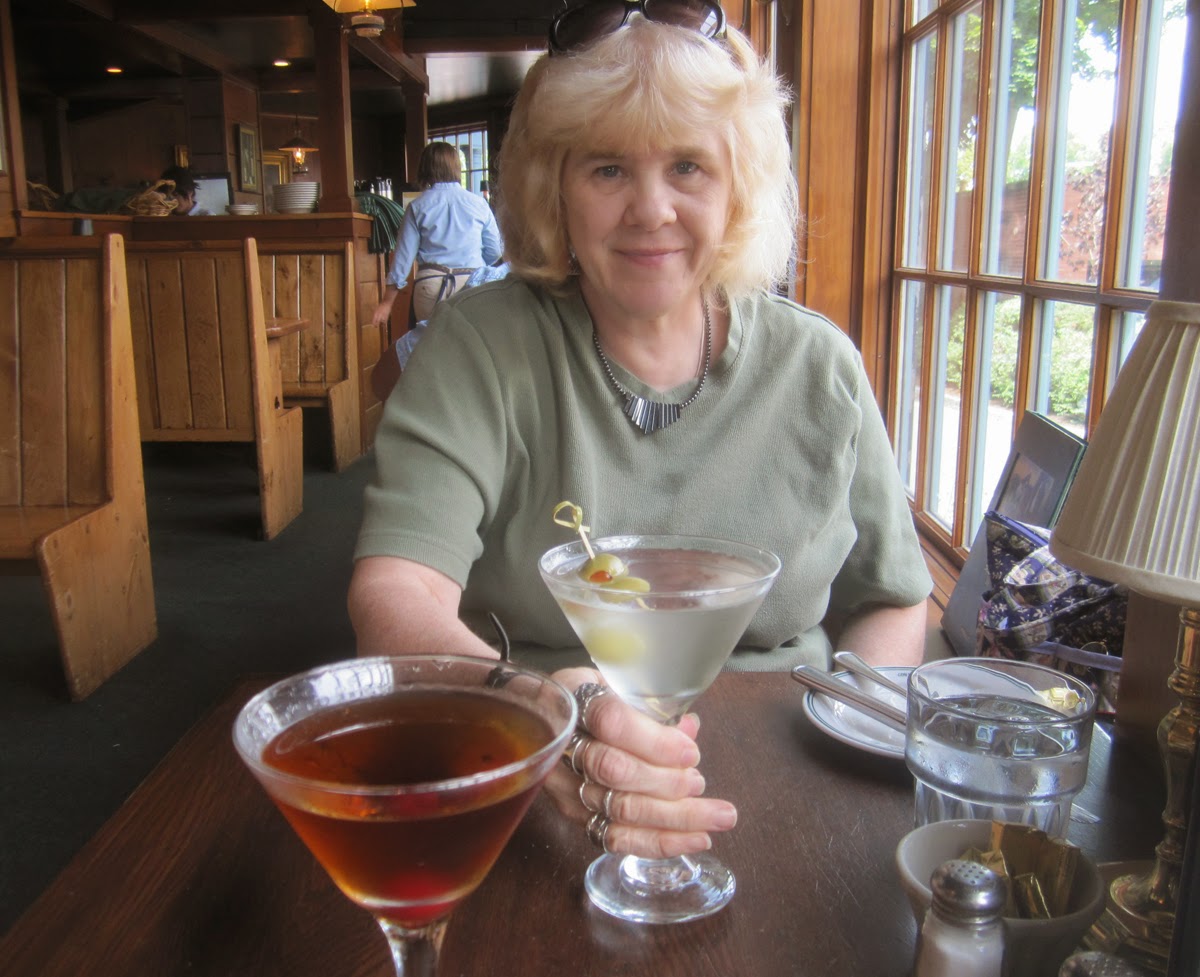 Like me and my Mum at his mother's 100th birthday. 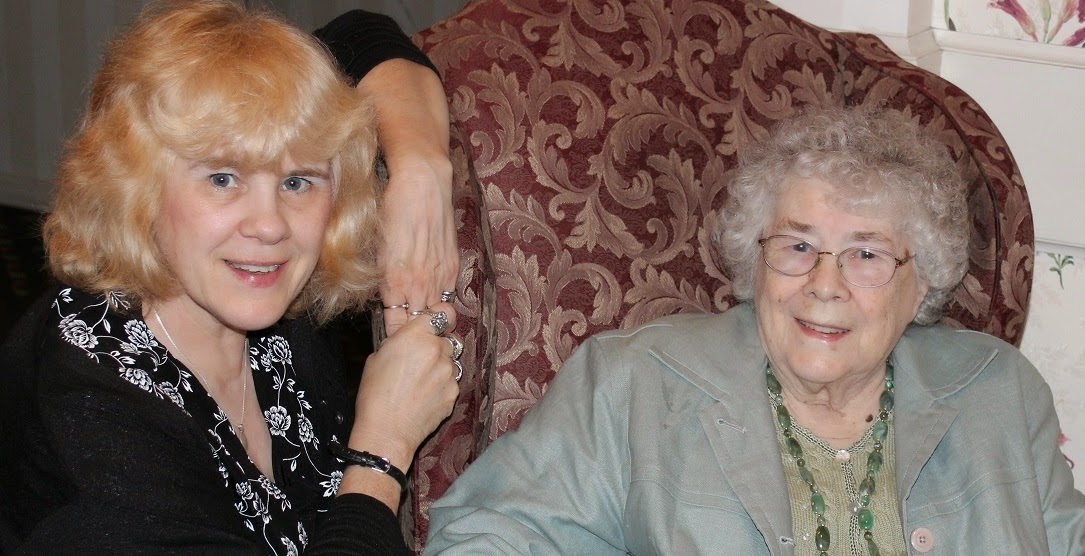 I don't think I'll ever be comfortable in front of a camera, but at least I'm giving it a try.

Do you avoid the camera, too?

Posted by Lorraine Bartlett at 6:24 AM

I am the picture taker! I am extremely uncomfortable in front of the camera!

I have gained weight after the birth of my son and two years later, most of it is still there. I recently refused to stop taking pictures though, no matter how fat I feel that day. In the grand scheme of things, I want that photo of me and my son on his 2nd birthday, no matter how frumpy I'm feeling that day. I want that photo of me and my 89 year old grandmother, because who knows if it could be the last one that we take together. It is hard though, but I just know that I am going to want those memories when my grandma is gone and when my son is fifteen and would rather be hanging with his friends than his mom!

PS You look great and you truly have a beautiful smile!

My husband and his father were professional (wildlife) photographers, as were my husband's two brothers (hubby and one brother still are). My mother-in-law detested having her picture taken, so there were virtually no photos of her around. Until I got into the family and started pointing the camera at her. At first she didn't like it, until she realized I was trying to make her look as attractive as possible. Consequently, nearly all the photos we have of her, including a wonderful one of her and my father-in-law together, right before she died, were ones I took.

The key to taking a good photo is to shut up and smile. If you're saying "Don't take my picture!!" when the shutter is clicked, naturally it's going to turn out poorly.

I don't mind my picture being taken. I have some fat ones, thin ones and fat again, (now). I want my grandsons to have pictures of me and not to forget me. I just want my hair to look good or at least ok. he he

Hey, you look great, Lorraine. Stop worrying and smile like Karen in Ohio says. :) I won't recognizie you at NINC because you're a blonde now.

Lorraine, I never would have thought of having a picture taken in a family member's last days. My husband was at home in hospice care in April and that didn't occur to me. I don't think he would have wanted that. You have the pictures in your memory.

The pictures here of you are lovely. You look especially relaxed in the anniversary photo with a martini in your hand.

LOL -- as they say in Hollywood, "Dahling, I ALWAYS look relaxed with a martini I my hand."

Seriously, though, on my Dad's last good day, he was HAPPY and it showed. I wish I had a picture of us together on that day.

Everytime I go to the hairdresser, I get a different color. Blonde, red, blonde, red. I never know how it'll come out. But I love the way she cuts my hair, so I'm sticking with her.

Ever since I got my first BIG job, I've had a really good camera and I love to be BEHIND the lens, not in front.

I so hear what you are saying. Even when everyone says you look good and you also realize you're not 25 anymore, sometimes what the mirror or photo shows you is pretty scary. I think I look good in the mirror at home and then pass a mirror in a store and think, whoa, who's that? Or I think I look okay and then get on Skype with the kids and find myself wishing I could watch them but why do they have to see me? Silly, but a hard thought habit to break.

Years ago when my husband was serving a remote tour for the AF he made a wonderful montage of photos of me through the years set to music. It was a surprise and I loved it - EXCEPT you know what my first thoughts were, don't you? "Every hair was a bad hair day and I thought I was fat THEN." Oh well. Working on weight and fitness for health now, but I do love being a grandma and a great-grandma and they all seem to love me just as I am, so I'm working on accepting that as well.

Great pictures and glad you shared them.

I generally hate photos of me. But every Thursday, when I thumb through the box of pics for a Throwback Thursday photo, I'm reminded of moments in my life. That's helped me get past the kneejerk "delete that!" feeling that I get when I see spontaneous shots. Maybe I don't share all of them with the world, but I like having something that takes me back to a good memory.

I love this post, Lorraine! And I also love the blonde hair. Is it true blondes have more fun? (Hint: yes).

My elder daughter doesn't like to have hers taken if anything is bothering her about herself. Me, I'm in front of the camera no matter how bad I look. XOXO MJ/VA

I don't like the pictures taken of me very much, either. And any selfie I have ever tried to take, has been immediately deleted. I smile and my eyes go shut! Ugh! I am going to try to work on acceptance though, because I realize there are not very many pictures of me that I like, but everyone else says look good. Sooooo...I must accept that is how I look!

Aw Lorraine...you look gorgeous and I'm not just saying that because I love the books you write! I'm not one for having my picture taken either, but, when it comes to having my pic taken with my grandkids all around me...I know, no matter what I look like, it's going to be an awesome picture!

The past few years I've had a few pics taken. I saw some old pics and thought I don't look so bad but I thought I looked hideous. So maybe that's the case now. And I don't want my gson to forget me. He's small and lives 2000 miles away.
A thought just occurred to me, we don't mind them being with us and seeing us, why do we mind a pic of exactly the same thing??
I shall have to ponder that. :)

Right there with you, Lorraine. I haven't liked having my picture taken since about age 12. Awkward. Ugly. Dumb. I've told myself all those things about almost every picture taken since then (except maybe this one with the cat - what a fluke!) Lately I've been telling myself, and trying to believe it, that pictures are just frozen moments. We move. We make faces when we talk. We change every few seconds. Other people don't see us as only those frozen moments. They see us as alive. I love the pictures you shared today. They show you loving where you are and what you're doing. Great frozen moments and a really nice post. Thanks!

I used to love being in pictures...until I gained the weight. In fact, when I first joined Facebook I refused to put any recent photos of me up. Only recently I've said, "heck with it". Now I post pics of me, not so much for better, but for worse.

Wonderful blog, Lorraine!! I think you look blonde and cute--and as MJ asked, do blondes really have more fun. I bet they do. Great photos and I loved them all.

Someone famous once said, getting old is not for the light hearted..it is tough to age..we are not taught how to do that..until one day we look in the mirror and freak!!! I never minded much, about photos...as sensitive as the next, to looks and such..but, as I have been aging, and sagging, and wrinkling..I am MUCH more aware..when someone has a camera.....and I am understanding more, how my granny felt too.....years ago...heck, my favorite sis in law, always said- once we are dead, who cares?!!!

While I don't love to have my picture taken I don't mind it. When I was little my mom took all the pictures which were always of me and dad or my grandparents or aunt. However the only pictures I have of myself and my mom are from when I was little. Now that my mom is gone I wish I had more pictures of us together.

Hate it now. When I looked good, I was too shy to have my picture taken. I wanted to, but was afraid to ask someone to take it. No selfies in those days. Now, like you, I wish I had pictures of me and my Dad, and other special people in my life. I have a friend who takes pictures of everything. Kids going to school, eating out, parties, visiting with friends, etc - I mean everything is documented. I wish I was more open like that.

Ooh.... I hate having my pic taken. Love taking pics though... as a matter of fact, I was just in B&N and have an interesting pic to post to FB of a certain book on the New Releases shelf....

The key to a good photo, I hear, is to relax. I wouldn't know...my photos are usually horrendous. My eyes disappear when I smile and if I don't smile, I look severe. My grandchildren -- if any -- are going to wonder about me the way we wonder about our 'Whistler's Mother' ancestresses. They probably loved to joke and laugh but they look grim due to the constraints of picture-taking. Oh, well, they'll just have to read my books to know what a nut I really was!

I'm the picture taker in my family.