First of all, congrats to fellow chicks Ellery Adams and Leann Sweeney on their book releases this week. Happy sales to these terrific authors and happy reading to all you fans.

I have to confess that (aside from authors) my new best friends are rocks.  And, no, I don’t mean diamonds, but I’m taking about pea stone and flagstones.
When we bought our renovated forty-two year old ranch house  in the middle of March 2012 with mounds of snow covering the ground, no one realized how badly neglected the grass and garden were.  It was worse than starting from scratch in some ways. When the snow melted we discovered that the patio was so overgrown with brush that you couldn’t even see it.  The remains of two perennial beds and a rock garden would have broken the hearts of the people who created them.  The back of the property was a dark and bug-infested jungle. We found garbage, broken glass and building debris at every clean-up attempt.

Since then (this is our third summer) we’ve been working to rebuild and recreate.  I estimate another four or five years, we’ll get where we’re going. But never mind that, we like a challenge.

The right side yard access to the back yard gate was nothing but dirt.  Even bad grass and most weeds refused to grow there, in part because it was so shady but also because black walnut trees apparently leech something into the soil that most plants don’t like.  There was a large tree stump squatting forlornly in the middle of the space and a spindly maple tree next to it. The earth was packed hard and it was dry enough to crack. A few crews of renovators had left a lot of dangerous junk buried in that dry soil.  In short, a disaster. 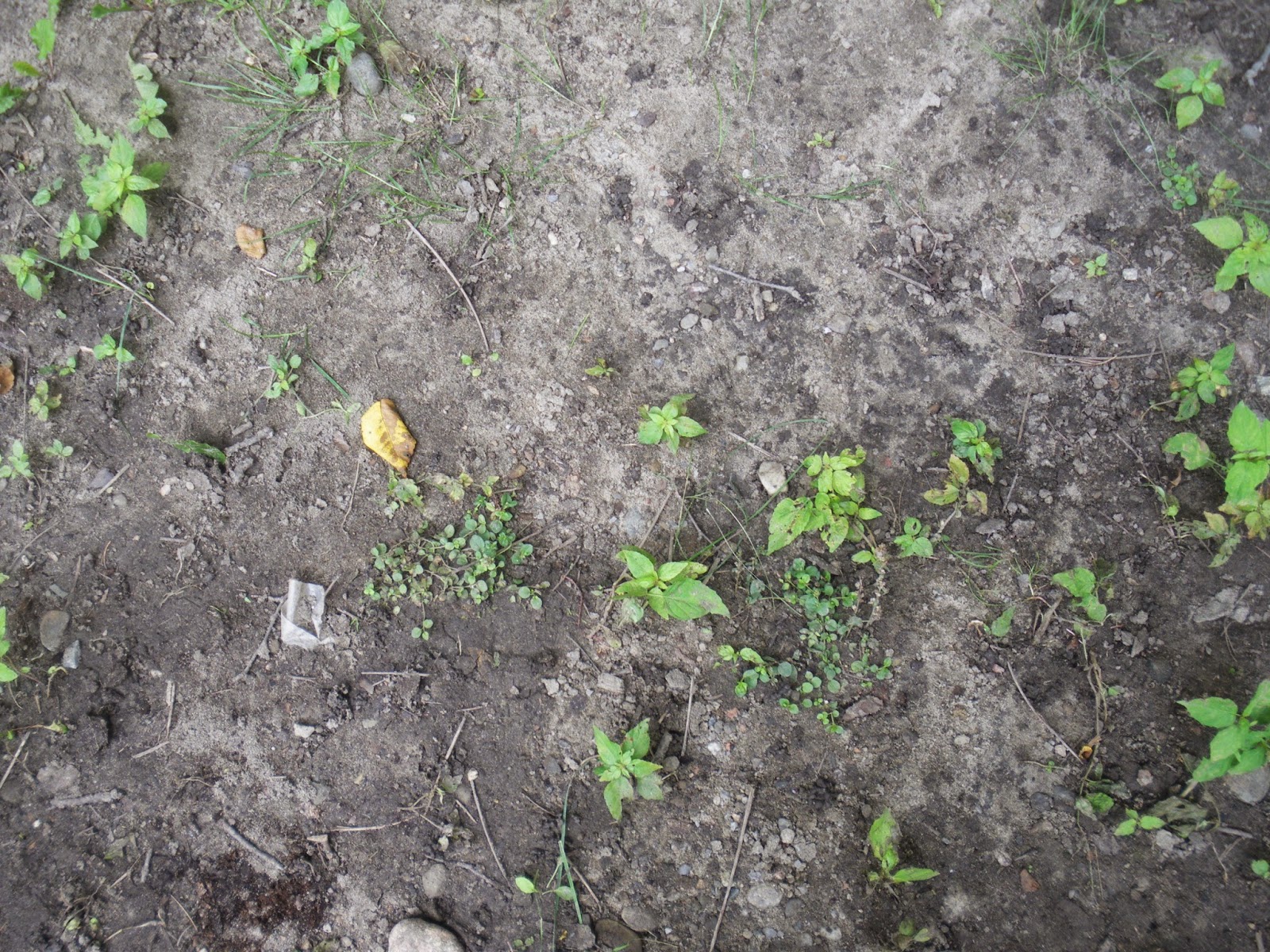 We had plenty to do without fretting over a lost cause. So, for the last two years, I just pretended there was no side access to the back yard.  Of course, this approach couldn’t work forever. One day, I came across an inspiring photo of a garden path in pea gravel, with potted plants, in an old magazine at the hairdresser.  It got me thinking.  I wasn’t even sure how to get pea gravel or what was involved with it.  Now I k now.  People bring it to you in trucks and dump it on your lawn (that may be another blog post). At any rate, it arrives with a certain drama.

Soon after the small mountain of pea gravel and a big hill of pine mulch arrived, my hubby (who had never been involved with any kind of gardening project) and I started to build this little path.  It still needs work, for sure, but we are very happy with it.

It is what you call cheap and cheerful. The pea gravel cost $70 for a truckload. I managed to do a good deal for the flagstones stepping stones that make it possible to stroll along it without snapping your ankles. By the way, lifting those suckers into and out of the car was better than lifting weights.

We scooped up hostas from other parts of the yard where they were making trouble and build up a bed on the left side. The hostas immediately took to it.

Next we'll add these pine nuggets to dress up the hosta beds and keep them cool and weed-free. 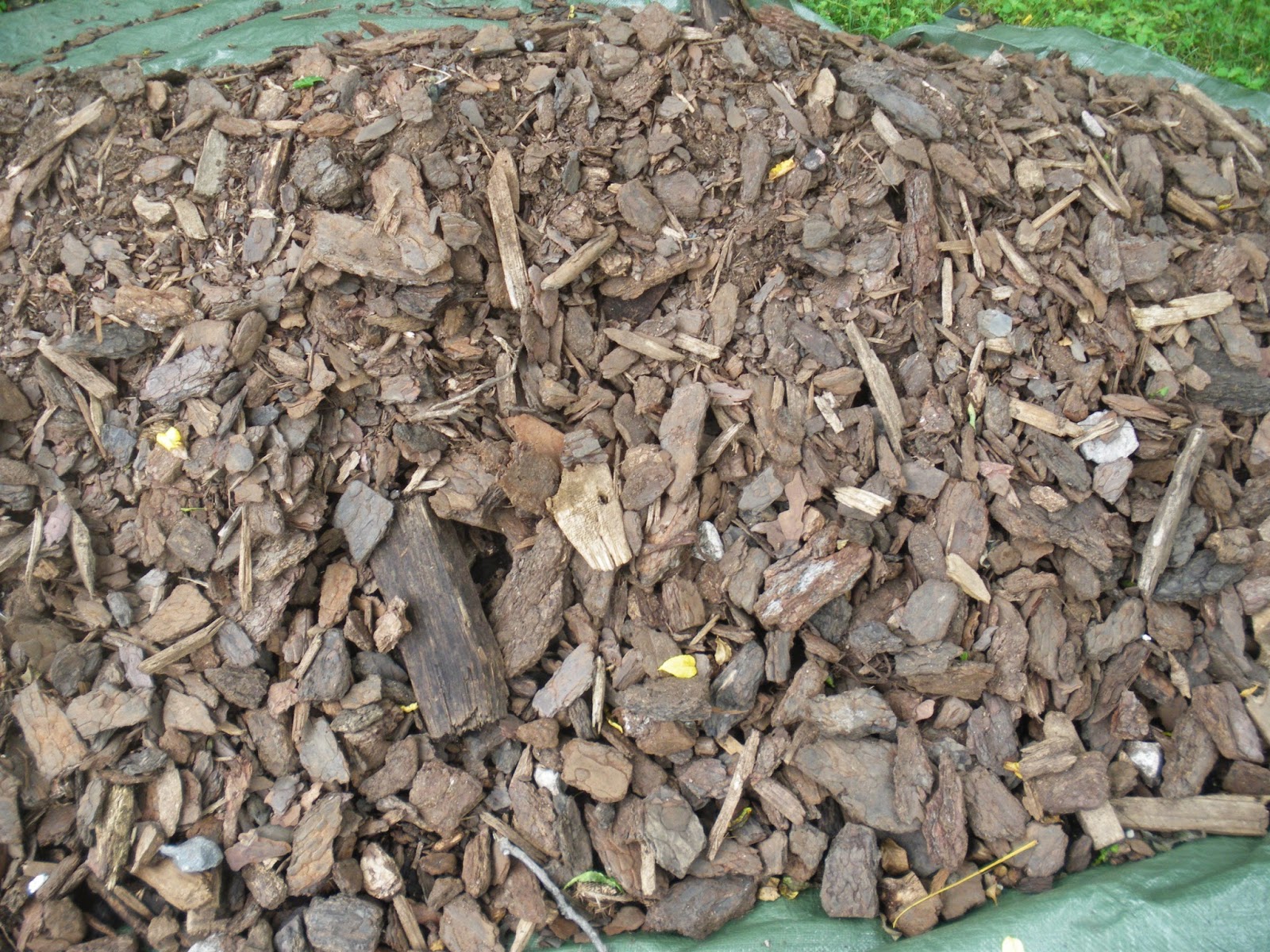 We received a gift of enough periwinkle to line the other side of the path from our  friend who claimed she had way too much.  Look out, it takes over, she said.  We'll cross that bridge when we come to it. It’s just getting started but I hope that next year, I can show you some vigorous growth on the periwinkle side.  If it takes over, it can wander onto the municipal path next to the bed.  No worries here.

Impatiens is pretty much the only annual that will survive in our formerly gloomy spot, and I was lucky to find some sad specimens in the end of season sales and pot it up.  Who knew there was a North American shortage?

At any rate, what was once a lost cause has the potential to be a charming spot next year and we think it even looks pretty good now. 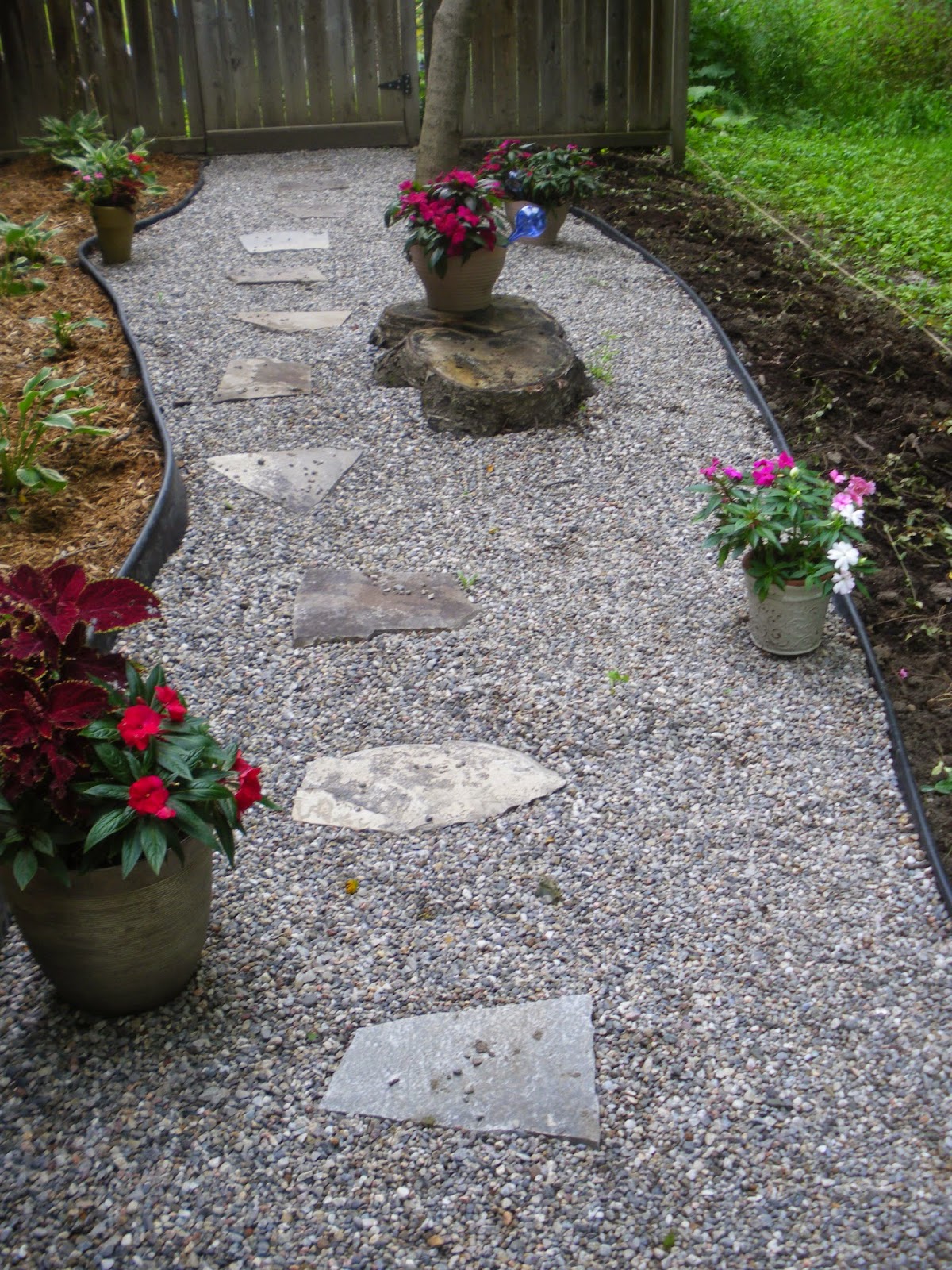 So, what about you my friends? Have you had a cheap and cheerful garden success to share?  Or any other kind?
Posted by Mary Jane Maffini at 1:00 AM

An impatiens shortage! I wondered why I couldn't find any this year! I finally, just yesterday, planted some begonia in the pots where I typically plant the impatiens. Thanks for clearing up that mystery, Mary Jane.

The chemical in the walnut trees is called juglone. We have black walnuts in our yard, too, and it is a challenge. Another challenge is how to keep down the weeds in the paths between my raised beds. If I'd known how cheap pea gravel was I'd have ordered some a long time ago. Thanks for that info, too. Did you put down some landscape cloth beneath it?

What a lovely yard! I have so much shade here too. Keeps the house cool but makes it hard to grow grass and flowers. I finally did the ivy thing.

You have done a beautiful job. Congratulations on the beautiful results of your efforts.

Thanks, Karen! I didn't know what the chemical was, Juglone is now part of the vocabulary. I love the black walnuts, but not that aspect of them.

We didn't put down landscape cloth because no weeds grew there, however we usually do us it for anything with rocks or mulch.

Our pea gravel comes from quarries near here and the cost may depend on your area. I'm betting there's rock in Ohio!

I love ivy, Duffy. I'm not sure it's hardy here in this part of Ontario where we often get minus thirty for a couple of weeks in winter. But I will look into it.

There's something lovely about plants that do up!

Thanks,Annette! The challenge continues. We are telling ourselves that it's good exercise too.

WOW, this is gorgeous, I'm impressed!

Thanks, Mary! Of course, it is carefully photographed to leave out everything that's not done yet.

Lovely! Very clever the way you used the tree stump.

Thanks, Nancy! It was that or trip over it every time we walked down the path. Wink.

Regular impatiens have had a disease for the past two years and that is why the shortage. New Guinea impatiens are ok with no disease. Your path looks very nice.. I don't have anything to do like that here at my apt.. Just my flower garden in the front.

You are right, Diane. These were the New Guinea. When we lived in the city, we had a flower garden in the front and a bit on the side and back, very low maintenance.

We are hoping we don't overdo it. There's something lovely about an apartment where you can avoid all that!

Very nicely done! It really is amazing what mulch, pea gravel, etc. will do to dress up an area.

My favorite go to when I need "magic" is pine straw. Here in Georgia it is readily available and what everyone uses.

You have a weedy area, spray it with roundup, spread pine straw and voila...very nice. Then stick a few pots with flowers in that area and double voila.

Having a defined path makes a world of difference as well.

I have what I jokingly refer to as the black thumb of Death. No matter the "hardiness" of the plant, I seem to make it succumb to an untimely death. I'm not sure when it started, but I do remember my pumpkin garden. How beautiful it was, with its bright orange flowers and green curling vines. Happiness was soon in my grasp, then BAM! Rollie pollies galore came and it was a smorgasboard for them, and catastrophe for me. After that, everything seems to have a dying or wilting effect. I'm assuming the humane thing would be for me to not touch plants anymore.