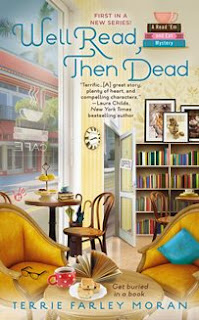 Read ’Em and Eat is known for its delicious breakfast and lunch treats, along with quite a colorful clientele. If it’s not Rowena Gustavson loudly debating the merits of the current book club selection, it’s Miss Augusta Maddox lecturing tourists on rumors of sunken treasure among the islands. It’s no wonder Sassy’s favorite is Delia Batson, a regular at the Emily Dickinson table. Augusta’s cousin and best friend Delia is painfully shy—which makes the news of her murder all the more shocking.

No one is more distraught than Augusta, and Sassy wants to help any way she can. But Augusta doesn’t have time for sympathy. She wants Delia’s killer found—and she’s not taking no for an answer. Now Sassy is on the case, and she’d better act fast before there’s any more trouble in paradise.

I love the idea of a bookstore café that becomes the backdrop in this debut novel in this lighthearted whodunit. The tone was comfortable and the pacing was perfect in this engaging mystery where the suspect list was plenty. The author did a great job in pulling it all together in a manner befitting a drama that kept me turning the pages until the end. I adore the cast of characters that includes feisty Sassy, Bridgy, her BFF and the ever-present Ophie. This is very enjoyable and I can’t wait for the next book in this delightfully appealing series. 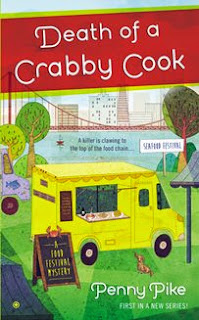 When restaurant reviewer Darcy Burnett gets served a pink slip from the San Francisco Chronicle, she needs to come up with an alternative recipe for success quickly. Her feisty aunt Abby owns a tricked-out school bus, which she’s converted into a hip and happening food truck, and Darcy comes aboard as a part-timer while she develops a cookbook project based on recipes from food fests in the Bay Area.

But she soon finds someone’s been trafficking in character assassination—literally—when a local chef turns up dead and her aunt is framed for the murder. The restaurant chef was an outspoken enemy of food trucks, and now Darcy wonders if one of the other vendors did him in. With her aunt’s business—and freedom—on the line, it’s up to Darcy to steer the murder investigation in the right direction and put the brakes on an out-of-control killer.

This was very enjoyable and I love the pacing and flow of this light whodunit. This mystery was hard to put down and I especially like the humor that was contained within the pages. Darcy is a wonderful character and I adore the relationship she has with her Aunt Abby and her cousin Dillon whose appearance is not what it seems. Jake and the other food truck vendors round out this delicious cast of characters and I can’t wait to read the next book in this delightfully entertaining series. Bonus recipes are included. 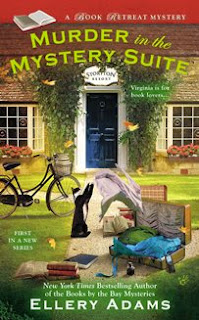 Tucked away in the rolling hills of rural western Virginia is the storybook resort of Storyton Hall, catering to book lovers who want to get away from it all. To increase her number of bookings, resort manager Jane Steward has decided to host a Murder and Mayhem week so that fans of the mystery genre can gather together for some role-playing and fantasy crime solving.

But when the winner of the scavenger hunt, Felix Hampden, is found dead in the Mystery Suite, and the valuable book he won as his prize is missing, Jane realizes one of her guests is an actual murderer. Amid a resort full of fake detectives, Jane is bound and determined to find a real-life killer. There’s no room for error as Jane tries to unlock this mystery before another vacancy opens up.

This is a tantalizing mystery that teased me with a perfect setting of a resort that was wrapped about books and more books beyond one's wildest dream. A murder puts a damper on things and that's when this book kicks it into high gear with a light whodunit that carried me from one chapter to the next as I had to know what happens next. The author did a beautiful job in creating a wonderful escapism that was both engaging and entertaining with a very comfortable tone and lovable characters that I can't wait to learn more about. Jane is determined and a strong heroine who takes her new role with honor and I love her interactions with her family and friends. This is a great read and I look forward to the next book in this delightfully charming series.

Great reviews. I put all of them on my t-b-r list, which I may get to in this lifetime. :-)

Excellent choices, Dru! Thanks for reviewing these wonderful cozies!

Congratulations to Ellery on placing #11 for her new series on the NYT Bestsellers List.

I enjoyed reading these reviews and look forward to reading the novels for myself.

Good morning! Thanks so much for your kind words about Well Read, Then Dead. I am overjoyed to be in such great company.

Thanks, Dru...I want to read all three!

What a great crop, Dru! They're on my list. XO MJ

I love all of Ellery Adams books. So cant wait to read the new one. And I am very excited to try the other 2. They are on my cozies to try board on pinterest so I dont forget!

It's fun how the books you review here, Dru, are usually the ones that move to the top of my TBR list. All 3 of these look like great read.

I loved Murder in the Mystery Suite. I oved everything about this book and look forward to reading more books in this new series. I was a bit disappointed with Weel Read Then Dead. I liked the characters, setting and bookstore/cafe idea. The plot just seemed to drag a bit. But I will read the next installment. I don't give up on a series that quickly. I have not read Crabby Cook yet. It is in my tar pile.

Can't wait to read them all!