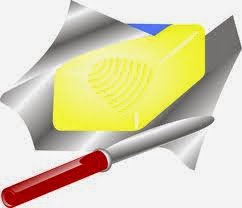 I’m so happy I can eat butter again. And bacon.  And nuts. And avocados.  I missed them. A lot.

Like millions of others back in the 80s, I fell into the hype that butter was evil and switched to margarine. So what if it was all chemical-based? It wasn’t butter! It wasn’t that awful death wish that our parents, grandparents, great-grandparents and so on ate for centuries! Same with nuts. And bacon. And fatty meat that came straight from the animals they raised on their farms (that weren’t given hormones, antibiotics, or genetically tinkered with corn.)

Now a slew of studies have debunked the butter and saturated fat myth, and I, for one, am REJOICING by making my eggs with butter again and eating bacon with it, (although I do buy a nitrite and hormone free variety.) These studies prove cardiovascular disease is NOT related to fat and cholesterol intake. Yay!!!

In her new book, The Big Fat Surprise journalist Nina Teicholz lists the flaws in the original Ancel Keys study that the myth was based upon; how saturated fat has been a healthy human staple for thousands of years, and how the low- or no-fat craze has resulted in excessive consumption of refined carbohydrates, which has resulted in increased inflammation and disease.

If fat WAS the culprit, and thousands upon thousands  of us practically eliminated it from our diets, we should see LESS diabetes, LESS heart disease, and LESS other health issues than before. Right? Instead, we have them in epidemic levels.

And all along the true culprits have been sugar, chronic stress, toxins in the environment, and sleep deprivation.

Another myth that has now been debunked is that cholesterol is bad. I always questioned this. Why would our bodies manufacture something bad for us? Now they are finding out that people have a higher risk for heart attacks and cancer by having their cholesterol levels too low. But that’s not what Big Pharma would have you believe.

Cholesterol is vital in building cell membranes, interacting with proteins inside cells, and helping regulate protein pathways required for cell signaling. Why would you want to do away with it?

And just as a body needs cholesterol, it also needs saturated fats for proper function. We evolved as hunter-gatherers and have eaten animal products for most of our existence. Why would they suddenly become harmful? (Well, except when the animals are kept in tiny cells, filled with hormones and antibiotics to make them larger, and given feed loaded with pesticides. )

So go forth and enjoy your butter again. And bacon. Seriously, who doesn’t love bacon? Just make sure you buy the healthy kinds. (For me, the extra I pay for organic butter and hormone-free bacon keeps me from having to pay a doctor later.) And as with anything we eat, moderation is the key.

Buttered popcorn anyone? Yum.
Posted by Kate Collins at 2:00 AM

I'm with you, Kate (and Paula Deen)-I love butter!! For years, I've been forcing down the fake stuff. Interesting what you said about cholesterol, too. I just read a big study that said that high cholesterol wasn't the biggest predictive factor in heart attacks--inflammation is. An inexpensive test for c-reactive protein can measure the amount of inflammation in the arteries. The test only costs about $10.00, I think, but doctors rarely give it. There's a lot to think about here, great blog!

I always preach all things in moderation to my clients at the fitness center!

Exactly, Stephanie. Even good things can be bad when overdone.

Thanks, Mary. That study is right. It shouldn't be about the total cholesterol. If the (good) HDL is high and the LDL is low, and the ratio of total to HDL is good, it doesn't matter what that number is. Lots of research is showing that it's all about the inflammation. What people need to find out is what is causing their inflammation. And it's most often stress and carb overload. Processed food is not healthy.

My cholesterol is over 200, but my HDL is 140. My doctor is amazed at my numbers. My husband's are the exact opposite, oddly.

We have not eaten margarine in years, but I use most fats judiciously, and try not to drown things in them, whether I'm using butter, olive oil, coconut oil, or safflower oil. What I mostly try to do is cook from scratch, using fresh vegetables, and organic meats. We have property where my husband shoots two deer and two turkeys each year, and that is mostly what we eat, along with a few delicious chickens from a local organic farmer. Their eggs are really good, too.

But everything in moderation, right? Processed foods are the worst, I think. "Lowfat" usually means they took the fat, which makes things taste good, out and replaced it with some kind of sugar, which turns into fat in the body. And ends up being worse, in the long run.

Who doesn't like bacon and real butter, I've been on the fence with margarine ever since I met my husband, since he is lactose intolerant but we've found a spread that is olive oil based and like it. I have recently started eating right, I refuse to call it a diet but I have cut all the junk food and a lot of processed foods and let me tell you, I've lost some weight and feel much better. I think it's about getting back to basics. But I also believe you have to exercise every day, even if it's going for a walk every morning. Desk jobs are killing us too because of our "hunter and gatherer" genes. Our bodies aren't meant to be in a stationary position for long periods of time.

Ending on a good note. The best time is right now in the Midwest, where we can go to our local farmers markets/stands and get locally grown produce which is something I savor every summer. I just had corn that was picked two days before I bought it!! And supporting your local farmers is priceless!! Happy Eating!! :) ,

Amy, you are on the right path. Most people are amazed at the energy they get back when they take out processed foods (all that white flour stuff mostly) and put in veggies and healthy fats. My neighbor went on the paleo diet and went from sluggishness to wide awake and raring to go. She couldn't believe the difference. And you're right. We were not designed to sit for hours. Inertia is a killer. Stand up every 15 minutes and stretch if you have a desk job (like me.)

Karen, you're a smart lady, my friend. People really don't understand how much sugar they get a day unless they start to add up the bread, chips, crackers, pretzels, donuts, cakes, cookies, pancakes, pasta, etc. that they consume. That should be the smallest part of their daily intake, not the largest. Most 1st world countries have it all backwards.

I stopped eating margarine a few years ago. I also stopped putting artificial sweeteners in my tea and coffee. I eat butter and try to cut back on the amount of sugar in my drinks. No more diet sodas. I drink more water instead. I try not to eat or drink things with too many added chemicals. Those things scare me more than fat and sugar. I love eggs. I crave eggs. I could eat eggs for all three meals. I limit myself to 2 daily. Everything in moderation!

Great changes, Annette. And don't you feel more energetic, too?

Great post, Kate! And definitely cause for rejoicing. Variety and moderation, that's the key. But I love my butter and cheese. Hugs. MJ

Amen, Kate. I've been eating like that for a lifetime. I remember trying that high carb, low fat regime in the mid-90s and my body rebelled. I actually gained weight. :) Dropped those carbs fast and went back to eating good animal protein, veggies, and fruits like I always had. Difference was I dropped those carbs. That's when I lost weight. Read Atkins and saw the science behind it all. I tried spreading the word, but not everyone wants to hear it. But I recall how those extra pounds dropped off and you've got energy to spare. And now we have even more good sources with organic. I buy cage free chicken, grass fed range free beef, and wild caught fish. Plus, dropping carbs like bread, cereals, etc keeps you away from those nasty GMNOs. And of course, Sugar. The Temptress. :) She is the worst offender.