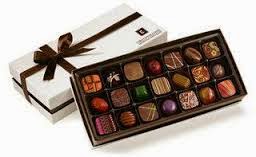 Yes, life can be like a box of chocolates.

If someone had ever told me that one day I’d be reading books on quantum physics, I would have slapped that person upside the head. Honestly, I squeaked through my college physics class (which I recently learned is Newtonian physics). But who knew that? Not me.

Fortunately, I was introduced to quantum theory in a roundabout fashion: I bought a little book on the Law of Attraction, and that started a cascade of reading about synchronicity, the Law of Abundance, Law of Manifestation, and the rest of the laws.  Bet you thought I was going to say I learned about it from The Big Bang Theory. (Also true.) And p.s. did you know Albert Einstein was a quantum physicist? E=MC2? Yep, quantum physics.

Back to the theme: I am intrigued by synchronicity. It explains why when I am talking to one of my kids on the phone, the other calls at the exact same time. Or when I am thinking about someone, I’ll either run into her at the store or get an email or phone call from her. Do I want to know more about a subject? If I think about it, stories will suddenly pop up on the Internet.

I’m sure you’ve had examples in your life, but here’s my latest and I think my best ever.

For several months now I’ve been working on #17 in the Flower Shop Mystery series. I usually call my current work in progress by its number until I think of a suitable title, a process that can take months.  For this book however, I had a working title immediately that helped me keep in my focus what my main character’s frame of mind is. There’s a reason for her mindset, but that’s a secret to be revealed when the book promo comes out.

Last week, my editor asked to see my synopsis, so when I emailed it to her, I explained that the title was just my working title. She emailed back immediately that she loved it and if I was serious about it, she’d see how the other editors felt. Within the hour, she had emailed again to say that not only the other editors but also the publisher loved it, too, and now it was official.

My title is: FLORIST GRUMP.

See why that helped me keep Abby’s mindset in focus?  Anyway, here’s the synchronistic part. Two days after the title became official, the news came out that this is the movie FORREST GUMP’s 20th anniversary. (There were the famous bench and box of chocolate photos all over the Internet, too, which gave me an idea for the cover.)

I am so excited about the timing! And now I have a very good feeling about this book.

I also have a special treat coming up for you in August. But I’ll save that for another blog.

Have a happy non-grumpy day.

Florist Gump!! I love it, all your titles are incredibly witty (like your books).

It was meant to be! I can hardly wait to see that cover.

Interesting blog. Synchronicity does happen. It does surprise one when it happens. Guess I didn't realize that there was a word for the events,. Thanks for sharing the back story of your new title. I like the title and it makes it even more special knowing the story behind it.

Synchronicity is such a cool thing. I always refer to it as "a sign." Your comments on quantum physics remind me of my new interest in relearning trigonometry (after taking a class on gun incident reconstruction--I'm newly fascinated!). Our high school teachers would be proud.

Another wonderful title and am looking forward to reading it and the next with Aunt Abby, too.

LOL, Diane. My college prof would be dumbfounded. He'd probably wonder what I was drinking. But what is gun incident reconstruction. Sounds like something a mystery writer would want to know.

Thanks, Fred. Aunt Abby thanks you, too. LOL

Thanks, Tarri. It makes me smile every time I open the file.

[I can't accept quantum mechanics because] "I like to think the moon is there even if I am not looking at it." Einstein....

Love it and cannot wait to read it!

Darn, hit enter too fast - anyway I may be the only person who has never seen Forrest Gump.

Sorry to rain on your parade but my 50 year research on this fascinating and challenging topic indicates that quantum physics does not adequately explain the process that results in synchronicities. Quantum physics does not address the core issue of the meaning of meaning. My original theory indicates that synchronicities are self generated messages -by products of an individual's creative process. See my book at Amazon: DEMYSTIFYING MEANINGFUL COINCIDENCES (SYNCHRONICITIES): The Evolving Self, The Personal Unconscious, and The Creative Process.