HOW I CURED MY LITTLE SOCIOPATH 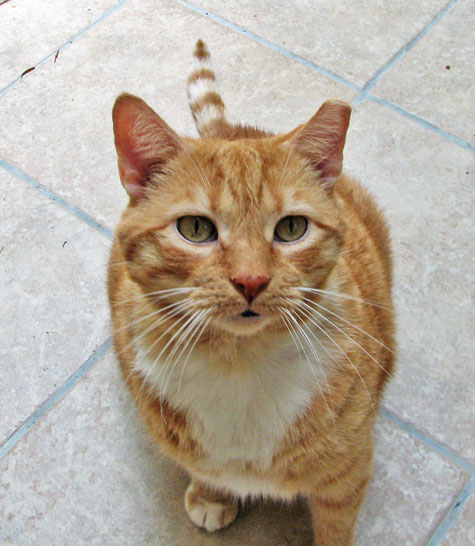 As promised, here is how I cured Henry of *most* of his sociopathic tendencies. If you remember Henry's story from last week, he was on his way to being a full-fledged sociopath, without conscience or remorse. Let's face it, if Henry was a teen-ager, he'd be spending a lot of time in juvie.

When I first adopted Henry, (rescued from the neighborhood) I heard from the grapevine that he's already lost two or three homes because of his "aggressive tendencies." I had to keep him in the garage for the first couple of months. I'd let him inside to eat and how did he repay me?  He'd race around the den like a maniac, beat up my seven cats and then run back out to the garage.  So frustrating. I called him "Gladiator Cat" and wondered how in the world I would ever tame him. He was very friendly and affectionate to humans so I was baffled by his behavior towards his fellow cats.

I asked myself what "treatment plan" I would devise if Henry were a client. (I'm a clinical psychologist.) I decided unconditional love and LOTS of attention might be the answer. So here's what I did; it was amazingly simple and best of all, it worked!

1. I set aside 20 minutes a day just for Henry. Yes, I know I could have been learning Mandarin or doing Pilates but I figured I owed Henry 20 minutes to help change his little cat life around. (and my life, of course.)

2. We went to a special place for the 20 minutes and I sat with him on the glassed-in sun porch. No other cats were allowed out there for our special time together. (they had their cute little cat faces pressed against the glass, as if wondering why "the evil cat" was getting all the attention.) As soon as I unlocked the door to the porch, Henry ran eagerly ahead of me, knowing he was going to have my undivided attention. It was the highlight of his day.

3. I made sure I had a nice selection of cat toys (he loves catnip mice and also those "cat dancer" toys with feathers on the end.) I also had an assortment of grooming supplies, brushes and combs.

4. For 20 minutes every day, I gave Henry unconditional love and attention. I played with him, groomed him, pet him, gave him tummy rubs and he purred happily the whole time. I think he was amazed at his good fortune.

5. I started noticing changes in his behavior right away. He's still not a model citizen of course, but he is so much better! He very occasionally has a "stand-off" with one of his housemates, but he has stopped attacking them, stopped "menacing" them and has even leaned over and started grooming one of the female cats. What a transformation!

6. It took about 3 solid weeks of my "program" to turn things around and I never missed a day. It was so worth it!! Henry is fun, playful and a very sweet cat to have around. It was a small price to pay to change this little sociopath into an adorable pet. If you're having behavioral problems with your pet, I hope you'll try my method. I hope you have good luck with it and I'd love to hear how things go.

That is wonderful Mary! Will you keep spending 20 minutes with him each day even now he is more well behaved?

What a great story! Made me feel guilty for not spending more time with Spooky and Dr. Watson, my cats. Love that you plan worked. Mary…the cat whisperer. :-)

HI Adnan, thanks for stopping by! Glad you liked Henry's story.

HI Aurian, I don't manage to do it every day, it seems a couple of other "issues" have arisen with other cats. I don't want Henry to slip back into his "old ways" though, so I'm really making an effort.

HI Duffy! Spooky and Dr. Watson sound adorable, you'll have to share some stories about them!

You're so clever Mary--put all that training and experience to good work! We had one poor kitty, Tipper, who never would let us touch her. One time she crept over and settled on my stomach on the couch...I was thrilled but it never happened again. I should have called the cat whisperer! xo

Lucy, that's sad about Tipper, I've heard of cases like that. I always wonder if the cats were traumatized in some way early on in life, or if it's genetic. Or maybe some cats are just hopelessly shy? Wish I knew the answer. I hope Henry's story will help other cat lovers with little "sociopaths" in their house. Thanks for stopping by!

Aurian, I forgot to say that now is Henry is more socialized he's spending more time as a "family cat" and comes upstairs to take cat naps in my bed. So he's getting some cuddle time and face time, even though it's not as structured as before. He seems much happier (and my other cats are happy that Gladiator-Cat has disappeared.

Lucy, I see that DEATH WITH ALL THE TRIMMING is available now as a pre-order!! Yay. Looking forward to the next installment in the Key West Food Critic Mysteries. Fabulous series.

Perhaps my youngest sister should do this with my nephew, both me and my twinsister are convinced he is a psychopath already at the age of 10.

That was a great blog Mary - I really enjoyed it. In my experience with ferals, semi-ferals, and fosters, I've found that affection and attention (and often a LOT of patience) are the best way to teach them to trust and "be all that they can be". With my latest foster mom, she had some serious trust issues, but I tried to go in and spend time with her at least twice a day - just sitting and talking to her, and petting or brushing her. I could see the difference in her. She still has trouble if there are sudden moves, but you can calm her down when that happens. Some people think that cats are very aloof and don't need people, but that is just not true at all. Some of them just don't know how to ask for it or show it. That's one problem with taking in strays - you just don't know what traumas they experienced before coming to you. But it is so rewarding to know that, at least now, they will have a good life. Thanks for taking the time to help Henry learn that life is a lot easier if you just get along.

Thank you for all that you do for the kitties, Lynda (and for all animals!). Eliza (Clyde's love interest in the "Lifetime Movie" blog) has really warmed up, too. If I sit on the sofa, she jumps up next to me, scoots over as close as she can get and purrs, rubbing her face against my hand. Sudden noises and sudden moves can still spook her, but I think that is from living on her own outside for so long.
s

When I got my 2nd cat Crystal my Snowflake got bent out of shape. We moved from Pa to NYS. I can been away from them for 10 days and Crystal was acting crazy. My mon & girls drove the cats to our new farm. When the got here I went to the van, got Snowflake & Crystal out of their crates, I had one in each hand brought them into the house and placed them down together. They now get along much better. We have since added a 3rd kitten Starre, Crystal mothers her and all 3 get along.

I have a black kitty rescued from New Orleans streets during Katrina. He gets along with the other cats but seems scared of me. However, whenever I leave my seat on the bed, he promptly sits there. He will sniff my fingers so maybe one day...

Brilliant, Mary! And so humane. I love this tale of redemption.

Thanks so much, MJ! Henry has really turned his little cat life around...his housemates are happy.

That's a good start, Shirley. That's how I started with Clyde, another neighborhood rescue. When he first wandered into my yard, I had to put out a dish of cat food and walk away--he was afraid to eat the food if I was too close to him. Gradually, he started sitting on the deck and I talked to him softly, and one day, I reached out and touched his paw. He nearly jumped out of his skin. But gradually he learned to trust me and eventually became an indoor cat who loves to be pet and brushed. I think Katrina will come around, but it may take a lot of time.

I found this submit being terribly educational. Thank you for broadening my expertise in this matter. No doubt their a good bit of composing likewise. Thanks