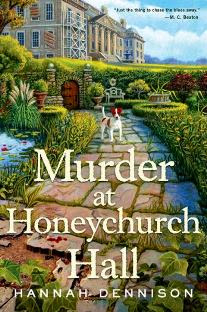 Kat Stanford is just days away from starting her dream antique business with her newly widowed mother Iris when she gets a huge shock. Iris has recklessly purchased a dilapidated carriage house at Honeychurch Hall, an isolated country estate located several hundred miles from London.

Yet it seems that Iris isn’t the only one with surprises at Honeychurch Hall. Behind the crumbling façade, the inhabitants of the stately mansion are a lively group of eccentrics to be sure—both upstairs and downstairs —and they all have more than their fair share of skeletons in the closet.

When the nanny goes missing, and Vera, the loyal housekeeper ends up dead in the grotto, suspicions abound. Throw in a feisty, octogenarian countess, a precocious seven year old who is obsessed with the famous fighter pilot called Biggles, and a treasure trove of antiques, and there is more than one motive for murder.

As Iris’s past comes back to haunt her, Kat realizes she hardly knows her mother at all. A when the bodies start piling up, it is up to Kat to unravel the tangled truth behind the murders at Honeychurch Hall.

What a great read! This mystery immediately grabbed my attention and was hard to put down. I love the comfortable tone that took me to a place in aristocratic Europe, reminding me of a modernized Downton Abbey and Upstairs Downstairs rolled into one solid plot that that kept me in suspense, as I had to find out what was going on with this eclectic and quirky cast of characters. The interjection of comedic exploits kept the story light with some laugh-out-loud moments and I loved the interactions between Kat, her mother and the inhabitants of Honeychurch Hall. The author did a great job in delivering a wonderfully crafted and action-filled drama that was entertainingly delightful and I’m looking forward to the next exciting adventure that awaits Kat and Iris. 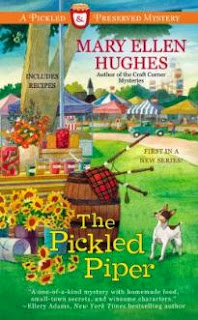 After her dreams of romance are crushed, Piper Lamb decides to pursue her dream of opening her own shop of pickles and preserves, called Piper’s Picklings, in the idyllic small town of Cloverdale. But she isn’t in town long before she encounters a barrelful of trouble.

The Cloverdale Fair offers Piper a sweet opportunity to promote her business. With her new assistant, Amy, she sets up a booth centered around an eye-catching display of the ever-popular dills in an old-fashioned barrel of brine.

But things soon turn sour when fairgoers witness a fight between Amy’s boyfriend, Nate, and town council blowhard—and bagpipe player—Alan Rosemont. When Rosemont is found floating in Piper’s barrel, Nate becomes the prime murder suspect. With Amy’s boyfriend in a pretty pickle, there’s no time to dillydally. But as Piper searches for the real killer, she needs to be careful to preserve her own life…or she may end up a pickled Piper herself.

I enjoyed this freshly-made story that was as sweet as the small town our heroine lives in and as sour as the murders that landed in her path. The author did a great job in pacing this light-hearted whodunit and setting up the mystery with enough suspects to keep me turning the pages, as I had to know who was behind it all. I liked that this tome teased me with clever twists that enhanced the delivery of this mystery as I followed the path of the killer. I like that the crime solving aspects of this story was a collaborating endeavor, led by Piper and their friends, lending a hand to clear Nate’s name. I love the small-town atmosphere giving a sense of close-knit family. Piper and her friends are very likable and I’m excited about their next adventures in this pleasantly delightful debut series. 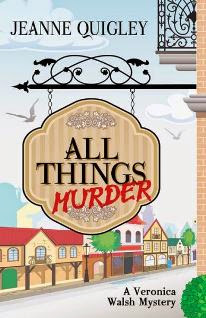 Emmy-winning actress Veronica Walsh is accustomed to role-playing. Over her thirty-two-year career on the soap opera Days and Nights, her character has been a businesswoman, wife (multiple times), mother, prison inmate and fugitive. None of that prepared her for the role of a real-life sleuth.

When Veronica cannot land a new part after the soap's cancellation, she returns to her Adirondack hometown for what she hopes is a temporary visit. No sooner does she arrive than Veronica finds herself in a swirl of turmoil, with her neighbor at the center. In the span of a few hours, powerful businesswoman Anna Langdon extends an invitation to Veronica to discuss a business proposal, ends a short romance with Veronica's high school beau, threatens to evict one of her retail tenants and thwarts a deal to build a mall on local farmland. Veronica receives an unexpected welcome-home present when she finds Anna's body the next morning, the cast-iron skillet used to kill her lying at her feet. Soon Veronica is chasing leads with the help of friend Mark Burke and her former co-star Alex Shelby.

Twists straight from a soap script, including two leading men vying for her attention, entangle Veronica as she gathers clues. Will Veronica solve the case, or will the killer be as elusive as an acting job? And will she play the heroine or the damsel in distress?

I like this book with its short chapters that had a nice flow in that you didn’t lose your place as the story moved along. The author did a good job in setting the pace and the tone in this light-hearted drama that hooked me immediately as I wanted to know what’s going to happen next. Veronica is not your typical amateur sleuth, which sets her apart from the others. There was a mixed bag of suspects and I enjoyed narrowing down the list with the clues that the author presented with some interesting twists. I got a sense of living in a small town in this comfortably written whodunit and it was fun. Boasting a likable cast of characters and good dialogue, this was a good read and I can’t wait to see where we go next with Veronica and her friends.

Visit Jeanne at jeannequigley.wordpress.com
Posted by Dru's Cozy Report at 3:00 AM

Thanks Dru for the reviews! I'm pretty sure that All Things Murder sounds the best to me. I'll pick it up!
P.S. I have a daughter by the name of Dru which is short for Drucilla.

Wonderful choices, Dru!! Thanks for keeping us up to date on these exciting new releases!

I'm especially interested in The Pickled Piper and will have to check it out of the library sometime. I've read some of Mary Ellen Hughes' earlier books.