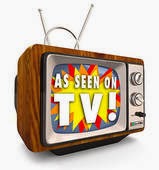 
Now's the time of year when television shows say "So long" to their audiences
and disappear from the small screen until the following Fall------or, in some cases, next January or February.  And---in true dramatic fashion---they leave in the midst of an unpected event or a surprise twist in the plot.  We novelists understand why the TV writers do that.  It's successful.  It keeps viewers talking and wondering about the characters and storyline throughout the hiatus.  However, as an audience member who has a few dramatic and/or suspense series, it's hard to wait.  Remember how shocking it was when last year's 2013's last episode of DOWNTON ABBEY concluded.  Shock.  "Oh, no!  Not. . . . "

On Monday night, one of my new favorites, THE BLACKLIST, signed off after several surprising plot turns------and a very Bad Guy who escaped and is out there with murder on his mind.   PERSON OF INTEREST has a season finale tonight, Tuesday, and it's hard to imagine what new surprises J.J. Abrams has up his writer's sleeve.  This storyline has surprise and plot twists woven throughout as a regular feature.   ELEMENTARY has had several surprises during this season, keeping audiences guessing.   And now-----Jack's Back.  Jack Bauer from the popular series  24 has returned with a new adventure.  So, we have someone else to worry about.  :)

You'll notice I'm particularly drawn to the action adventure series, but not exclusively.  DOWNTOWN ABBEY is a fantastic historical family drama.  And so is the new Masterpiece Classic offering,
MR. SELFRIDGE.  Both set in England after the turn of the 20th Century.   Also, the convoluted plotline of REVENGE keeps surprising audiences with plot twists.  Of course, some of the newer shows that appeared in the "off season" may return to intrigue us.  One I liked was ALMOST HUMAN, a sci-fi, futuristic adventure.

Those are some of my favorites, now what about you folks?  Which series or programs captured your interest this season?
Posted by Maggie Sefton at 9:12 AM

This has nothing to do with the above post, but you can not imagine my joy at finally being able to post on this site!

Oh, Stephanie - don't get me started on the Castle finale. After several convoluted plot twists they had the nerve to end it the way they did? Leave us hanging like that four four months? Good thing we already know it's renewed!

I'm all about the crime dramas, with one exception so besides Castle, my list of shows ending for the summer are: NCIS, NCIS:LA, Person of Interest, Criminal Minds, CSI, The Big Bang Theory (only comedy I can stand these days), Elementary, and The Mentalist. All of my shows have been renewed, which surprised me, as I was half-expecting The Mentalist to be cancelled.

Stephanie----I'm so glad you were able to finally get the problem solved. Happy to have you join us. :)

Heather----You know, the Big Bang is the only comedy I can watch, too. I've seen SO much tv over the years and most of those comedy shows look like "same old, same old."

Count me as another Big Bang Theory fan. Used to watch so many comedies, now it's one of only two. Also love Castle, Once Upon a Time, Agents of SHIELD, and Arrow, so I've had four intense episodes/cliffhangers in a row.

I also like many of the shows on the USA network, so I really only get a week or two off before they start up again in June. Got to get a season of Smallville watched during that time, as has become my annual tradition. (Never got into it when it aired, but enjoy it now)....

Castle is a favorite here too. We also enjoy Almost Human, Intelligence, Big Bang Theory, and Bones. I'm a fan of Criminal Minds and Without a Trace.

I haven't seen any of this season Arrow but stayed up all night and most of the day to run through season 1 on Netflix.

Oh, we have the new 24 set to record and plan to run through it at the end!