MAYBE IT'S NOT A TANTRUM 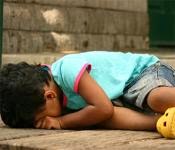 I saw something so disturbing in the post office today that I feel compelled to write about it. A toddler threw a major tantrum, lying on the floor kicking and screaming while people stepped over him to reach the counter.
Meanwhile his stressed-out mother stood by helplessly. After a few half-hearted attempts to encourage him to stand up, she left him lying on the floor and went to buy stamps from the machine. A couple of people offered to help, but she shook her head, tight-lipped. I had the feeling this had happened many times before. How does she stand it, I wondered. 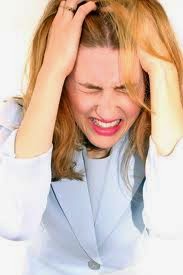 We've all seen toddlers having meltdowns--throwing themselves face down on the floor, crying, wailing, screaming and behaving in a way that's embarrassing to their parents and irritating to by-standers. Is this a natural and normal part of child development or is it something else?

New research suggests that a lack of emotional regulation (or self-control) in childhood can predict psychological problems in adolescence and adulthood. The study included 1,000 children from birth to age 32, and revealed that kids who were prone to tantrums and emotional upsets in childhood were more likely to have serious psychiatric issues in later life.

One of the main issues in emotional regulation is something known as "delayed gratification." We all know that when a toddle wants something, she wants it right this moment. While this might be overlooked in "the terrible twos," it can lead to problems down the road if not properly addressed.

Children who don't learn emotional control are three times more likely to suffer from health problems and addictions as adults, will probably earn less than $20,000 a year, will be poorly educated, will tend to become single parents and will be more likely to commit a crime.

Discouraging statistics, but here's the good news. Emotional control--both for children and adults--is a skill that can be learned. If you think your child is out of control, for your child's sake (and your own sanity), please do something about it. You can seek professional help, take a parenting class, talk to a friend or do some reading. Help is out there, all you have to do is ask!

I have a small nephew I really dislike, he is rude, he doesn't listen to his parents, he loves to destroy his sister's things. And now they think it is because he is a genius. Well, I don't buy that. This week he has gone to a school for gifted children, and he loves it there. But I don't believe his behaviour at home will change just because of that. We'll see.

Aurian, I have heard the same comment from some of my friends. They try to excuse bad behavior by claiming their child has a really high IQ. I don't buy it

Good information from a practicing psychologist like you Mary! Thanks for this!

Thanks for stopping by, Leann! I think we've both seen a lot of "out of control" folks in our careers. :-(

How many moms are going to admit that they have the "out of control" child? I'll step up and admit it. While it does not happen often (most of the time she listens, follows directions and uses her words well) on occasion and almost always in public, my little one will throw a holy tantrum. If it happened at a post office, I would have been the mom to step up and buy stamps while ignoring the behavior. I'd be tight lipped too. I'd be embarrassed and more importantly, it would be hard to watch your child go through the meltdown. However, she and I have gone to counseling and have been told to react in a "currency" she understands. She hates to be ignored and almost always when she realizes that I am continuing on our errand, she gives up the tantrum and becomes her bright, shiny self again. When she snaps out of it, I give her a hug and ask her to use her words again. She does. I recognize that she "acts out" her frustration at her parents divorce. She does not have consistency between the houses but with time, she is adapting to the consistency in my house. Sometimes difficult parenting happens in public places. I have so much more patience for parents in that same kind of difficult situation now.

Those are very insightful comments~I'm glad that counseling helped and you have the situation back on track, anonymous. Smart to give her a hug afterwards!

One of my children did that once and I found out YEARS later that she had knowledge of someone she knew closely who had been molested and this was the only way she knew to vent her frustration and fright about it. So sometimes tantrums MAY be a sign of something else.

These melt downs could also be a sign of much deeper problems..like autism. No one wants to look for trouble, but seeing a health care professional would not be amiss. Lack of Communication skills and social overload are common triggers for 'melt downs' in any kid....don't blame it all on bad patenting..

Yes, good points. I've seen "acting out" behaviors in small children when I was a CASA (court-appointed special advocate) at Family Court. Acting out was the only way these children had to communicate the terrible distress they were in--awful things had happened to them and they had no way to articulate it. It was very sad.

A very good point. Always wise to look below the surface of these behaviors, thanks for posting!

I have a stepdaughter I've raised full time since she was 3. At that young age, I knew something wasn't right. She was constantly throwing fits, unable to control her behavior at any age, and wouldn't do as she was told. I worked my butt off with therapists (some who told her to 'manipulate her parents to get what she wanted), teachers, psychologists, psychiatrists and her biological mother (who thought I hated the child and there was nothing wrong with her). After several issues with teachers, camps, day care and counselors, I finally convinced my husband there was a problem. We took her to a psychiartist who diagnosed her with ADD and strongly suggested she was bi polar but my husband wanted verifiable proof. Yes, because that's always easy when it comes to the psyche. He did not want to medicate her and things continued to get worse. Finally he was convinced that she had more serious issues than he thought, (at about 10th grade) and we put her on medication. She fought it and most of the time, if I wasn't watching, she didn't take it. She wouldn't take it when she stayed with her mother because, like I said, her mother said she was fine and the problem was me. She got into trouble at school, trouble at home, did poorly in classes, couldn't keep a job, lies, steals, fights with her siblings, you name it. Things got bad enough that prior to her turning 18 her senior year, I firmly told my husband she needed to move in with her grandmother and biological mother after high school to get away from the kids she was hanging out with and because our son should not have to live with her conflict any longer. At that point we slowly weened her off of her medicine, knowing her mother would tell her not to take it (since she never made her take it when they were together) and things hit the fan. I warned her that when she turned 18 I didn't want to hear the "I'm an adult, I can do what I want" thing. Of course she met a boy and decided she wanted to stay out all night with him. I told her no and she argued. She knew if she did it, her stuff would be on the front porch that next day. She didn't believe me. My daughter has consistently been rescued and allowed to 'skate by' in situations instead of dealing with the consequences and I never, ever did that. So that next morning her stuff was on the front lawn and I called her biological mother and told her to come and get her. She came, decided to tell me that her daughter wouldn't treat her this way and that she would, "FIX HER". I laughed and told her good luck. Two weeks later, when the child ran away to live with that boy in his unofficial group home, the mother called me and apologized and said I was right. Really? After three months of her living on the streets, I finally got her back to her biological mothers, got her back into high school and got her back on her medicine. She's not doing well though. She still lies, is compulsive, steals, etc. I consistently try to get her to go to counseling, but she won't and her mother says she 'doesn't need it'. Years ago her psychiatrist suggested a boot camp for her and my parents were willing to pay the almost $30,000 to get her set up but my husband and her mom wouldn't do it for fear they would 'lose' her. They've already lost her. She is getting worse by the day and sadly, there's nothing anyone can do now. I suspect she will end up a heroin addict because of the boy she's still hanging around, and his drug addiction. Yes, kids that don't know how to handle situations at a young age, and can't be taught to, definitely have problems to be addressed. It's not usually a phase and if more parents paid attention and didn't make excuses but got their kids help early, these kids might have a better chance at a healthy life in the future. Rant finished. :)

This is horribly sad!! I hope you can take some comfort in the fact that you did everything humanly possible to save her. You went above and beyond, but is so sad that no one else realized the seriousness of the situation. I've recommended those $30,000 "boot camps" from time to time. You have to be careful as many of them are staffed with unqualified people and the kids actually are in great danger. If she's hanging out with a drug addict, she is definitely in danger of becoming one. I'm afraid there's very little hope this story will end well, please remember that you did everything you could,

My son is generally very well behaved. The other day in the park he threw a full out tantrum, kicking legs, screaming, the whole nine yards. I sat quietly on a bench next to him while he got it out. I asked him if he was ready to calm down and he said yes, and sat next to me and let me hold him for a little while. Then, without prompt from me, he said "I'm sorry, mama". The fit he was throwing was because he wanted to hold the dog's leash. He is only two, but in that moment I just wanted to shrink away and disappear!

He is generally very well behaved...I think his emotions just get the better of him sometimes.

That was a really good way to handle it, Katherine! He sounds like a wonderful little boy.