I haven't written too much about my darling boy, Ragdoll kitty Marlowe, in a long time. Why? Because I am afraid to jinx the progress he's made. Marlowe has epilepsy caused by a neurological infection. What kind of infection, we do not know. I brought him home a year ago this past January when he was 3 months old. He was small for 3 months but I was told he was the runt. He was so gentle and sweet and I felt an instant bond, so I settled on the runt explanation. Here he is when he first joined our family. 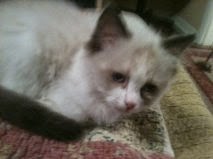 As many of you know who have followed his story, he wasn't just a 2.2 pound runt. He was sick. Very sick. He had his first seizure (that I recognized as a seizure) when I'd had him for about a week. Things got a lot worse before they got better. My Facebook friends offered the most amazing positive energy and I believe this had a lot to do with stabilizing him. Here's a few pictures of how he looked through 2013. One is with his best buddy Wexford, who weighs 12 pounds--so you can see how small the poor baby was. 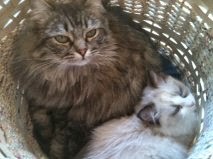 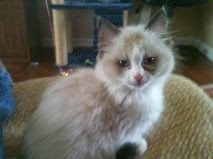 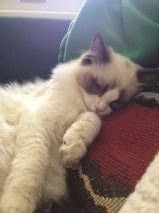 Today, Marlowe weighs over 9 pounds and he seems to be on the right amount of anti-seizure medicine. (As far as I can tell. He's a cat, he doesn't exactly like people handling him for stuff like getting on a scale!) I know from three attempts to get him off antibiotics that it is the wrong call. I reduce the dose just a tiny bit and he has problems. My last and final attempt was two weeks ago. Within two days he had his first seizure in over 6 months. Is he healthy? No. Is he wonderful? YES!

So here's my boy as he looks today. Isn't he gorgeous? He wouldn't be around if not for a lot of love--and not only from me, and the Facebook community, but from Wexford as well. 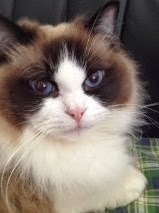 He looks so happy now Leann, you can see it in his eyes. :) What a huge difference from when you first got him, he definitely found the right home to be taken care if and loved.

Wow, Leann- he his stunning - gorgeous markings. What a change from the sick little guy he was. I hope that he continues to get better over time. It's the pits to have to keep him on Meds, but it sounds like you found something that is working for him.

So pretty. Makes me want to hug him.

He is so blessed to have found you for a mom and you are so blessed to have him. Just keep on this path and we will pray that eventually he will be able to change his meds and be much healthier. Sending you and Marlowe love across the miles. Have a good week.

He is beautiful and I pray for him every day!

Thanks for the update Leann, good to know he is doing well. I thought that antibiotics just stopped working if you took them for a long time, but apparently that is not true for cats. I am glad.

Leann - he is so handsome. When I scrolled down to his picture I burst into tears. He looks so healthy. This is great!

So pleased to hear that Marlowe is doin' so well now. What a handsome kitty he is!

Thanks Lynn. He is my little buddy!

Thanks Lynda. He handles the meds very well. It's just part of his everyday routine. We were at dinner at a friend's house not to long ago and I had to leave and come back to the rental to give him his evening dose. Only takes a few minutes and I went back to their house. Flexibility!

Thanks! I will hug him for you!

Thanks Jan. I don't believe in accidents. He is with me for a reason--and we both have benefited. :-)

Thanks Stephanie! It's working!!

Thanks Aurian. He was switched to a fairly new antibiotic that is ONLY for cats. I believe it keeps certain bacteria at levels he can tolerate. It's not a cure. There isn't one for whatever he has. We just take it day to day!

Aw, Kay, thanks. He is the sweetest boy--a bit of a klutz and though he thinks he can do all the cat things, he often fails. He is never deterred from trying, however! I like that!

Thanks Nissy! He is handsome indeed. And so loved. :-)

Saw your blog-link on fb. Those kittens are beautiful. Sniff and wags from Laika and Vaks.

Thanks so much Laika! I love them dearly. (and WHAT a beautiful dog in your profile pic!)

What a beautiful boy! I too believe all things happen for a reason. He was just meant to be with you, someone who would love him and take care of him. There should be more people in the world as special as you are.

Aw Jeannie, you are too sweet. He is such a little fighter and I am SO stubborn. Sometimes those traits can work together. I wasn't about to give up on him. The breeder offered a different kitten and I said NO WAY. This one needs me. It was as simple as that. I do follow my heart. :-)

Oh Leann, I am so very happy for you. He is so handsome. Nothing ever takes the place of that unconditional love of a "fur baby".

Thanks Tonya! He give back--but that's why we love our pets so much!

What a handsome boy. So happy to hear that he is doing well. All that love and support makes a huge difference, especially that of his buddy Wexford.

Thanks! Wexford loves Marlowe--unless Marlowe is getting too much attention. Then he sulks in the back room! But I make up for it later with lots of tummy rubs--which he adores.

What a cutie. So glad to hear how well he is doing. Isn't it amazing how they get into your heart and all those "extra" things you do just become part of the routine? Our Pug Pep had eye surgery when a few months old after suffering vision loss we were unaware of, and has had several minor surgeries to have growths removed and biopsied (all ok!) and a major surgery to remove the growth pinching his spine and preventing him from controlling his rear legs (ok too!). So now we apply 4 eye meds 2x/day, a few little stretches for the legs, and look for any new skin growth in between vet visits. Just part of each day - he "allows" it and give us lots of kisses when done :-). They are such blessings.

Pep sounds like he's been through a lot but he has a loving "mom" who makes sure he stays as well as possible. It's all about unconditional love, isn't it? :-)

He is such a cutie and looks very content. He is very lucky to have your as his "Mom".

Thanks Suzanne. He is such a little heart-stealer. :-)

So happy to see your beautiful boy! It is so difficult when they are not well but thy do feel your love.

Thanks Vicki. You know, he never even purred for the first year, but today he was on my lap purring away! That's such a lovely sound. :-)

What a gorgeous boy he is!! I am so happy he is doing better--you're right, love can do wonders. So glad you posted these lovely photos.

Thanks so much, Mary!

Awe what a beautiful boy. I read your update first on Facebook last night but waited to comment here. I'm so glad his illness is at least manageable now. I'm so glad he is doing better and that he was blessed with a family that loves and supports him.

Thank you Heather. He is a clumsy guy, but that doesn't stop him! He races around here in the morning and has been known to slide into a few walls. Glad to have a cat as klutzy as I am! :-)

Leann, I'm so happy to hear that Marlowe is doing so well. Not perfect, but so much better. Enjoy every minute you have him, and know that you were just the right person for him.....and he was just the right kitten for you (and Wexford!) He is beautiful (and so is Wexford), and I'm a dog person, not a cat person!

What a beautiful little guy. So glad you are able to manage his health. Its so frustrating, when you know their in pain, but, you can't communicate with them to help them. So glad he has such a loving home.

He looks adorable!!! He has a loving home, because you are such a loving mom!!! Most people would not take the runt, I had one, and so many people tried to talk me out of it. That cat ended up being the feline love of my life! Hopefully, he will continue to get and stay healthy, and your time together will be absolutely precious!!!!!! Thanks for showing the rest of the world what it means to be a great kitty-mom!

Thanks so much Amanda! He's my baby!

thanks so much Laura. He is one special kitty and will always be a baby to me!