Books on the Battlefield 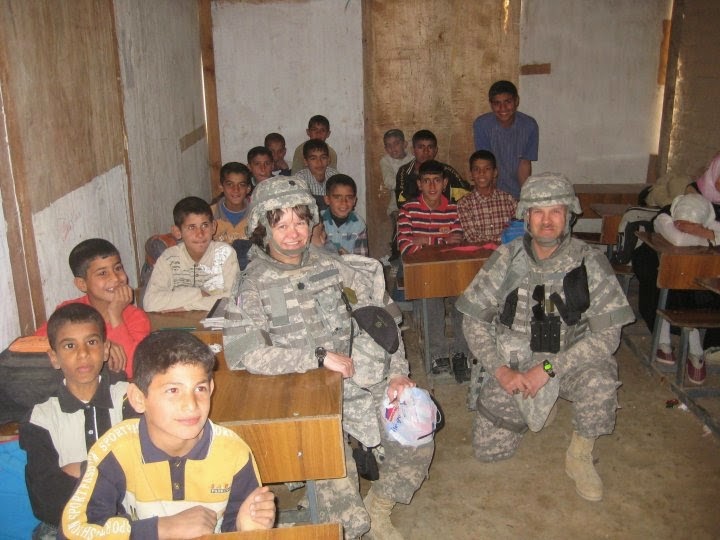 (I wrote this article for PW in 2012 but I thought readers might like to see it again.)
I'd never met Lt. Col Lisa Schieferstein, yet I was intrigued by her story. I knew Lisa was half a world away, doing a tough job in a gritty, remote location. As the garrison commander of the 389th "Renegades" division in Iraq, she was stationed at a desert outpost, with ninety soldiers under her command. The heat was appalling, the conditions were rugged and danger was ever-present. (When I sent them instant "cups of soup," the desert heat was so brutal, they could add water to the Styrofoam cups and cook the soup right on the hood of their jeeps.)
Even though my life is incredibly cushy by comparison (a nice psychology practice, a second career as a mystery novelist) when I saw a photo of Lisa--in full body armor--visiting a one-room Iraqi schoolhouse to bring presents to the children, I knew right away we had something in common; a love of books. We began to e-mail each other and I was offered a glimpse into her day-to-day life.
When I learned that the 389th was a "sustainment division," offering food and snacks to American convoys passing through, I decided to send boxes of books and homemade goodies to the Renegades every two weeks. Over the course of the summer, I mailed over 200 pounds of boxes stuffed with brownies, "sweet" Chex mix snacks made with pecans and corn syrup, individual packages of Crystal Light, coffee, creamer and sugar.  Tuna fish and individual packets of mayo. (They loved to make tuna salad sandwiches). Plus plenty of gum and hard candy (good for staying alert during night patrols, they told me.) And I included paperback books. They loved mysteries! My writer pals joined in with copies of their new releases and Carolyn Hart made regular donations of her best-selling books along with delicious gourmet coffees.
Kim Adams, SOS Military Liaison and an Air Force spouse said, "As a veteran of the first Gulf War, I know firsthand what difference mail makes to deployed personnel. But that war was short-term and our troops came home. Today, our military personnel are facing longer and more repeated deployments. I wish everyone reading this piece could adopt a soldier and send books, candy, snack and sure, home-made cookies or brownies. It's easy to do and it really means the world to our brave men and women in the armed forces."
As Janet Evanovich told me, "If Stephanie Plum could meet the Renegades, she'd give them a high-five and say, "Well done!" 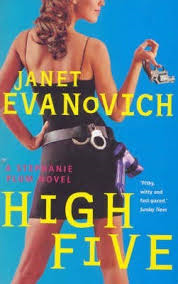 Epilogue: all of the Renegades are now safely home in the States. I know you join me in thanking them for their service.
Mary Kennedy
﻿
Posted by Dr. Mary Kennedy at 12:00 AM

I've donated books to our military troops several times and I'd be happy to donate to the organization you're supporting. I started back in 2007 when youngest daughter Naval officer Maria was assigned to Basra, Iraq---right in the Red Zone. I started sending boxes of snacks and things they need. A couple of years later when she was assigned to Baghdad, I sent books for her to give to soldiers. Someone was organizing it years ago so I sent books until they stopped doing it. So, contact me off loop with the contact info and I'll send more books.

Hi Maggie, thank you so much. I haven't "adopted" a new group yet (although people have asked me to) and am pondering my next project. I'm thinking about raising money for the groups that provide protective gear for military dogs. I thought the DOD provided this for the dogs, but apparently they don't. Local groups have to raise funds and it costs a couple of hundred dollars to equip a MWD (Military Working Dog.) I follow a blog on this and I'll send you the deets, thanks so much for stopping by.

By the way, I believe that's Staff Sergeant Eric Cooke with Lisa in the photo. If one of the Renegades reads this, please tell me if I got his name and rank right (apologies if I didn't). What a great group they are!

Lovely post, Mary! Very inspiring on so many levels.

What a great blog and reminder of how important books are in every setting. My first series was kind of "girly" and when asked to donate to the troops, I questioned the person organizing the shipment whether anyone would want to read them. She told me "they'll read anything!" If I were in same position, I would, too!

Thank you so much, MJ, I was so honored to have the opportunity to know these fantastic men and women. They are all heroes!

Thank you so much Leann, and you're right, they are desperate for reading material!!! They loved getting books, they loved opening the packages, etc etc. It means so much to them. I wish everyone would consider doing this, even if it's just a few times a year. A lot of people don't know that you can mail the packages from any post office and you pay the same rate as if you were sending them to an address in the US.

I try to give sometime to help at Goodies for Our Troops in Wellsboro, PA. Each month over 100 boxes are sent to servicemen and women from the area. Each box gets a copy of the notes we write. Though many of us take the time to wrap individual packages - things are protected from sand or water - we use boxes of small sandwich bags and seal them with labels. One person, however, puts the individual items together into bigger boxes for sending. Name tags are either put on each item or each bag. Since my husband was in Viet Nam, I know that our service persons need the support. We also donate coupons to family readiness groups in USA.

Rachelle, that's fantastic, it sounds like a great organization! That is such an amazing idea and donating the coupons is also terrific. I should check and see if we have something like that here in Delaware. I live near the PA state line. Thanks so much for sharing this idea!

Great article, Mary, and a great effort. People don't always realize that when you contribute to groups like this, you get so much in return, because it feels so good to know you are helping to make lives so much better.

You're so right, Lynda. I received wonderful thank you notes every time I sent a package!!

I'd just like to add that the soldier in the photo with Lisa is Command Sergeant Eric Cooke!