Because my mystery series revolves around cats, I write plenty of blogs and Facebook posts about them. But it's time to talk about my amazing dog, Rosie. She's a miniature labradoodle, weighing in at about 28 pounds on a good day at the vet. Her recent gobbling of cat food when she can sneak it has caused her to gain a few pounds. 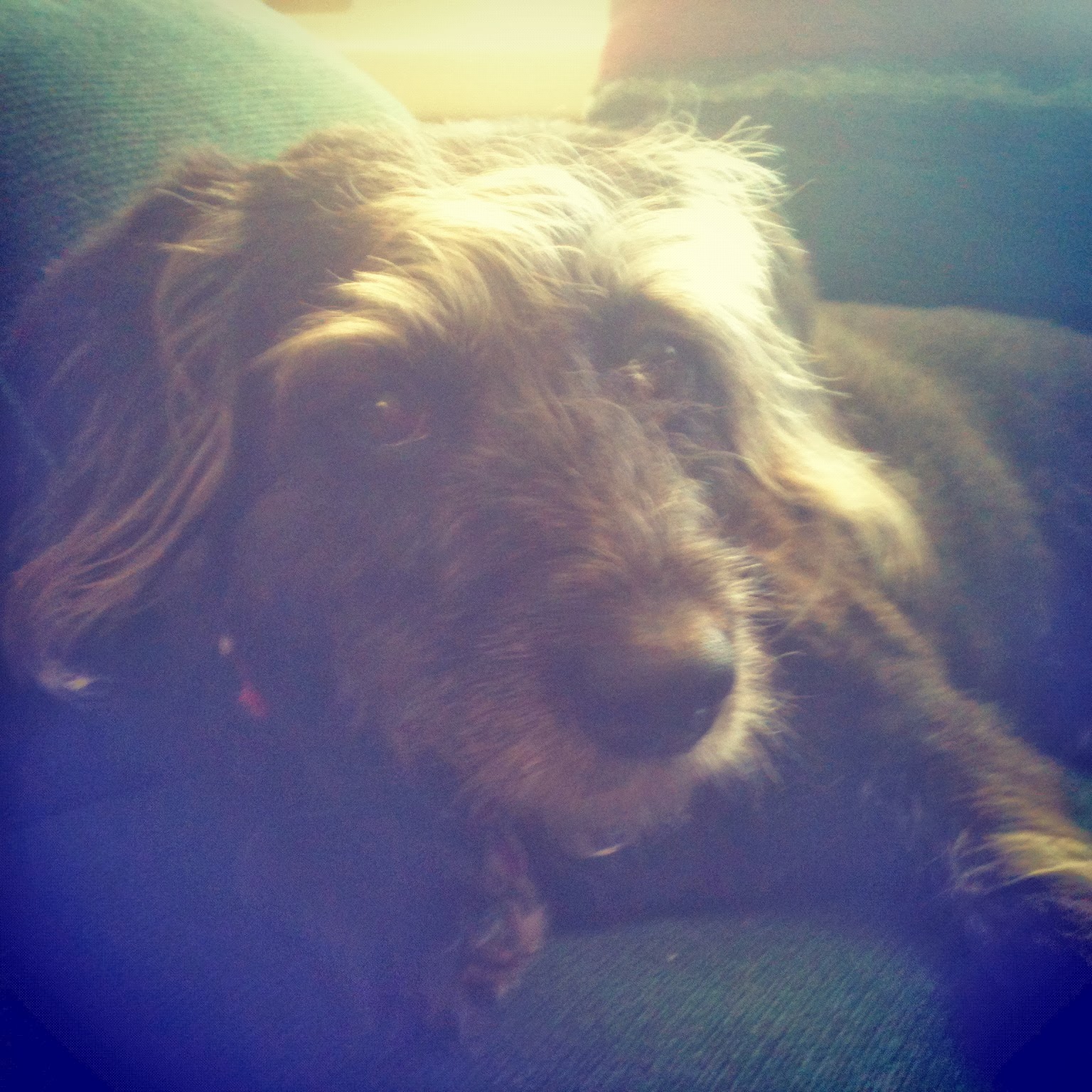 This is one smart dog, probably the smartest I've had the privilege to know. She got the poodle brain and the lab coat. That mean she sheds. A lot. One reason we went to this mutt breed was because we thought she wouldn't shed. Wrong. But she makes up for that one flaw in so many ways.

We learned early she would retrieve anything, play forever and love her people. But the tricks she has learned? Well, let's just say my husband never had a dog that would bring him his socks and shoes when it was 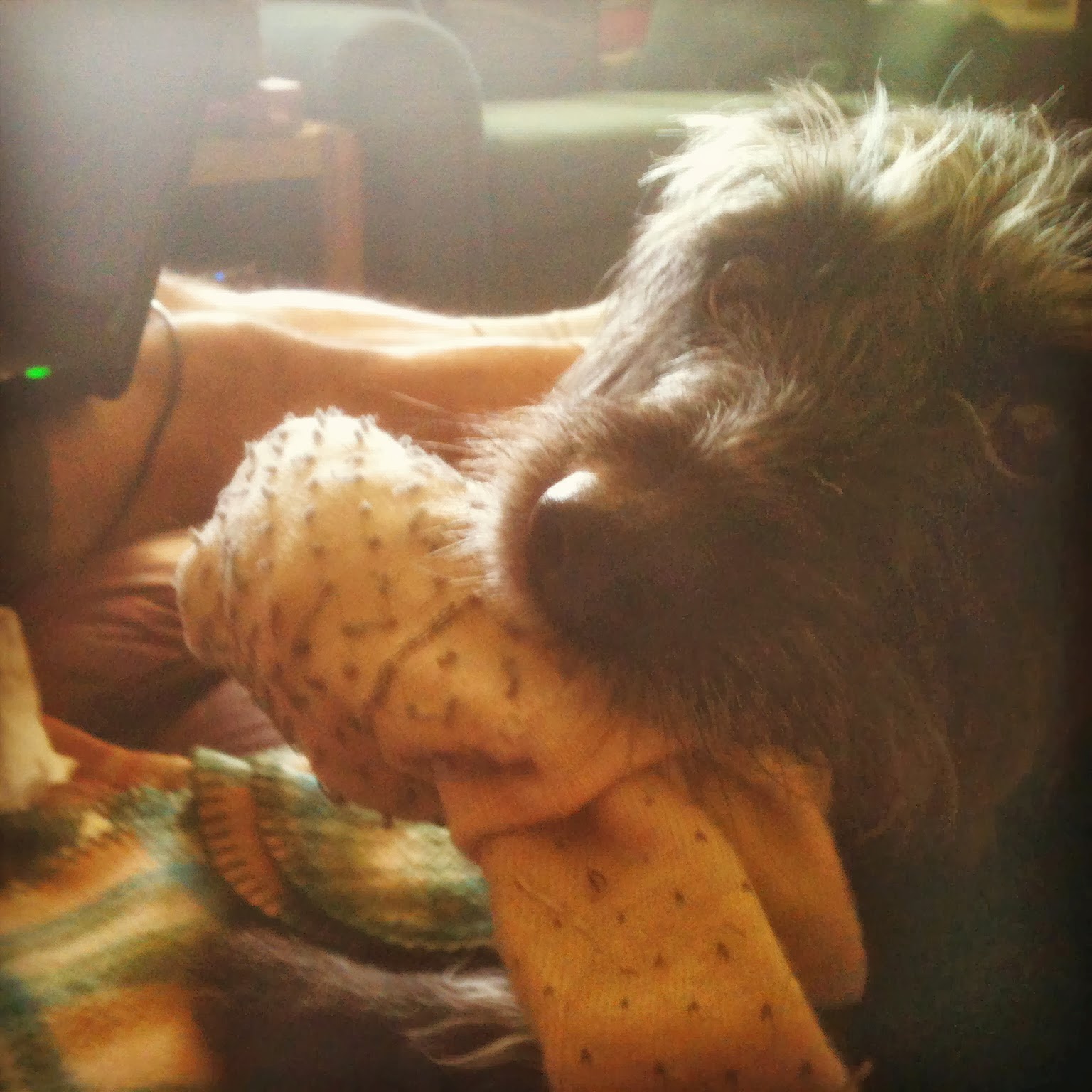 time for a walk. She brings in the newspaper and the mail, and does all the regular commands. She can sit, stay, rollover, turn around, dance, "sit pretty," lie down and go to bed on command. She also polices the cats from jumping on the entertainment center and knows everything we say. At times we have to spell words--especially squirrel and bird, since she will run to the window and look for such animals when we say the words.

But this past week, she learned something new and learned it very quickly. The place we are renting has a fenced yard--which we did not have in Texas. Back there, we always had to take her out, watch her and she'd come right back inside. But here? She can stay outside if she chooses. And lately she has chosen to more than ever. And she has learned the doggie joy of rolling in "stuff." Smelly "stuff." So, 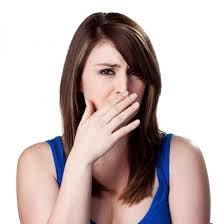 when she came in and I couldn't baby-wipe her down right away, I said, "Go in the other room. You're stinky." I guess I must have made a face to go with it because now, all I have to do is make that wrinkled-nose "it's stinky" face and off she goes to the other room! My husband thought it was just coincidence until I showed him. Yup. She is one smart dog! And we love her dearly!

What about you? Do your pets have "tricks of the trade?"
Posted by Leann Sweeney at 12:00 AM

What a great story Leann, and what a cute and extremely smart dog. Will she be able to be outside by herself in the new place?

Rosie sounds terrific, Leann. An adorable dog! My cats don't really do much in the way of tricks--actually, they don't do much of anything. They're like lovable, furry pet rocks!

Thanks Aurian. Since we are so close to the lake and she loves to swim, we won't be able to let her out on her own. That is going to take a little re-training. She's a stubborn girl and we'll see if re-training is as easy as training! :-)

Thanks Mary. But we all know how much joy cats bring--and they are such a calming influence!

That is so funny! She is cute, my daughter had a labradoodle. I couldn't believe how smart it was. I can say squirrel or bird to my Maine Coon cat and she immediately goes to the window and looks up. She also will go to the kitchen and look up at her canned food cabinet to let me know it is time to eat.

I needed a good chuckle this morning. How sweet!
Krista

Our fur friends know a lot more than many people give them credit for! Maine coons are brilliant and beautiful!

Thanks Krista. I certainly won't nickname her "stinky" because I'd never see her again. She'd hide out in the back room!! :-)

My min-pin rat terrier mix is a klepto. She will steal the white off bread if she things she can get away with it. She takes things to the same place all the time so they aren't lost forever, and she doesn't chew them...just has to have them. Yesterday alone she stole my left glove out of my coat, both my daughter's gloves out of her pocket, my other daughter's money out of her coat. So when anything comes up missing, I know who took it and where it is. Your dog sounds amazing.

Oh my gosh, that is too funny. You just wonder what is going through their little minds! :-)

Leann, that's a hoot! And your Rosie is adorable! Daisy and Lily (you see we both have a flower theme going) know lots of commands, including 'go to the sofa' and 'who wants to watch tv.' but the message I don't always want to receive comes from Daisy. If we're out in the evening and forget to close the bathroom door, we'll come to an unfurled and shredded roll of toilet paper. If the door is closed, she'll find tissues. It doesn't keep us home and I shouldn't laugh ... at any rate, I put it in one of my books, Too good to waste.

Thanks MJ! Ah, my cats have dibs on the toilet paper. But it's so funny that Daisy finds a close substitute to let you know you SHOULD NOT be going anywhere without her. Gotta love 'em!

Rosie is totally adorable and sounds like she would be so much fun to have around.

I once had a cat named Brandy who would put his toys away in his "toy box". The only problem is that he would also put anything else he could find in there as well - anything small enough to carry. He also loved water and would lay in the bathroom sink and wait for me to turn the water on so he could have a bath. And he loved cheese and would sit up like a dog and beg for cheese.

My current kitty, Socks, has mastered all the cupboards. He once got into one of the bathroom cupboards and destroyed 4 rolls of TP and then slipped out. I didn't realize it until I went to get a roll. He also opens the cupboards above the stove, where I used to keep their treats. He could get the bag down and share with his sister. Now I have to keep the treats in a sealed plastic container - until he learns how to open that. I've found the container on the floor, but so far it has not been opened.

Our fur babies can definitely keep us on our toes, but the love they give more than makes up for it.

My sweet Daisy likes to police the demon-cat Angel (especially when Angel is on the bar when Daisy KNOWS she's not supposed to be). Daisy is our rescue dog, and she occasionally reverts to fear-mode behavior (We received her from the pound as an owner surrender, but there is evidence that she was abused...cowering, etc.). She likes to hang out under the bed when things get too loud, thunderstorms, etc. She also tries to sneak Angel's cat food. She's our little gourmet: she likes things like cantaloupe, which our previous dogs have never liked.

We spell in front of our Pug named Pep because he doesn't really like to think he's a d-o-g. Of course he knows what a treat it, and when he was young just saying bye-bye would get him spinning in a frenzy. Seems he can tell when we are dressed up or getting ready to go out because he'll start to whine. And if I pick up my purse or put on my coat he'll run between my husband and me barking and crying. We think it's, "Hey, don't you know she's going out? Stop her!"

Thanks for sharing, Lynda. These pets are amazing. Wexford likes to push treats off the table for Rosie and let watch her eat let. He takes great delight in this for some reason.

so Daisy is a "policer" too! Love it. And btw, Rosie would love cantaloupe. The only food we have found she doesn't like is ketchup. They do amuse us, don't they? :-)

Too funny. Pep is determined to have his way! He wants you in his sight!!

Greetings from Canada! Our Lucy is my doggy-daughter who just turned 8. She's 60/40 Shih-Tzu/ Bichon Frise and has a sweet puppy face. From the time she was a pup, whenever I came through the front door, Lucy would demand attention -- the full-body happies, we called it! She's like a whirling dervish!! Her whole body would say "I MISSED YOU SOOOOOOO MUCH!!" I would always have things in my hands: grocery bags, purse, lunch bag, umbrella, etc. We would tell her to 'WAIT'. Oh my gosh, she'd sit with her butt wiggling and tail twirling and happy crying -- all at the same time! It's a sight to see!! It didn't take long until we didn't even have to say 'wait'. Somebody comes through the door with something in their hands, she will wait impatiently until they put their things down and then it's LUCY-TIME!! She's slowed down and sleeps more now, but when her people come home, that's her time to shine. She is the apple of our eye!

That is so sweet, Laurie! They just steal our hearts because they love unconditionally. Coincidence: our dog before Rosie was a Bichon named Bhebette! She lived to be 16 and was a real snuggle bug. :-)