* * * * * * * * * *
Welcome to Dru's Cozy Report: December 2013. This month I have three new series for your reading pleasure, and I'm debuting a new feature to my posts: highlighting recent releases. Enjoy!

Lending A Paw by Laurie Cass is the first book in the new "Bookmobile Cat" mystery series. Publisher: Obsidian, December 2013 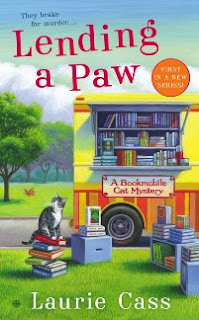 With the help of her rescue cat, Eddie, librarian Minnie Hamilton is driving a bookmobile based in the resort town of Chilson, Michigan. But she’d better keep both hands on the wheel, because it’s going to be a bumpy ride.

Eddie followed Minnie home one day, and now she can’t seem to shake the furry little shadow. But in spite of her efforts to contain her new pal, the tabby sneaks out and trails her all the way to the bookmobile on its maiden voyage. Before she knows it, her slinky stowaway becomes her cat co-pilot!

Minnie and Eddie’s first day visiting readers around the county seems to pass without trouble—until Eddie darts outside at the last stop and leads her to the body of a local man who’s reached his final chapter.

Initially, Minnie is ready to let the police handle this case, but Eddie seems to smell a rat. Together, they’ll work to find the killer—because a good librarian always knows when justice is overdue.

This was a fun read which I enjoyed immensely. I loved how the story flowed from beginning to end, keeping me in suspense with plenty of suspects and a couple of twists and turns that snuck up on me. Minnie is a strong-willed and gutsy heroine and I like her determination to find a killer, even when the odds were against her. Aided by her mischievousness cat, this delightfully charming whodunit is a welcome addition to the cozy genre. Boasting a small town atmosphere and entertaining conversation, this was a terrific read and I can’t wait to see what adventures Eddie and Minnie get into on their bookmobile.

FTC Disclosure – The publisher sent me a copy of this book, in hopes I would review it.
Murder, She Barked by Krista Davis is the first book in the new “Paws & Claws” mystery series. Publisher: Berkley Prime Crime, December 2013 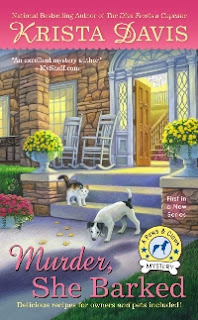 The Sugar Maple Inn in Wagtail, Virginia, is the country's premiere vacation hot spot for pet owners who can’t bear to leave their furry friends behind. But this tourist town smells trouble when a killer goes on the prowl.

Holly Miller's life has gone to the dogs. She has no job, her boyfriend's former flame is sniffing around, and a scruffy but loveable Jack Russell Terrier is scattering crumbs all over her borrowed car. Just when she thought things couldn't get worse, a troubling phone call about her grandmother sends her rushing home to the family inn on Wagtail Mountain.

The staff—and a frisky Calico kitten named Twinkletoes—adopts Holly and her new dog on arrival. But someone in this friendly town is bad to the bone. One of the employees at the inn has been killed in a hit-and-run accident—which is looking anything but accidental. Now Holly and her furry companions will have to nose out the murderer before someone else gets muzzled.

I love this book. It’s a great read that will have you quickly turning the pages to see what happens next. This action-filled book will have you rooting for Holly and her friends as they dig deep to find a killer within their reach. The mystery was well done as it kept me in suspense with the many twists and suspects that could have done it. It was fun trying to narrow the list of suspects down. The author did a good job in keeping this light and airy whodunit fresh, entertaining and engaging with banter between the characters that I enjoyed. Holly is a great heroine supported by a lovable and somewhat eccentric cast of character that includes Holmes, Zelda, Trixie and especially Oma. I love the concept of a town catering to pets and it’s a joy to see how wonderfully they all interact. I can’t wait to see more exciting adventures in Wagtail with Holly and her friends in this delightfully entertaining series.

Bonus recipes are included for both humans and our furry friends.

FTC Disclosure – The author sent me a copy of this book, in hopes I would review it.
Staged to Death by Karen Rose Smith is the first book in the new “Caprice De Luca Home Staging” mystery series. Publisher: Kensington, December 2013 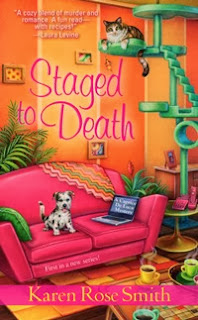 Welcome to Kismet, PA, where home stager Caprice De Luca helps her clients shine in a lackluster real estate market--and where someone may only be in the market for murder.

Caprice De Luca has successfully parlayed her skills as an interior designer into a thriving home staging business. So when her old high school friend Roz Winslow asks her to spruce up her mess of a mansion to perk up a slow buyer's market, Caprice is more than happy to share her skills. But when Roz's husband Ted is found skewered by one of his sword room's prized possessions, it appears the Winslows may have a few skeletons in their palatial closets. With the stage set for murder, Caprice will discover she can track down an antique tapestry and a cold-blooded killer with equal aplomb--as long as she's not the next victim.

I like it. This is a good mystery that flowed evenly from chapter to chapter and kept me involved in all phases as I progressed towards a finale that was befitting this light-hearted whodunit. The author did a good job in presenting this well-staged tome with a strong sense of family starting with our heroine, Caprice whose determination to see justice puts her in the cross-hair of a killer. With a great supporting cast, a unique sense of style and good conversations, this is a wonderful entre into the cozy genre and I can’t wait for the next book in this enjoyably delightful series.

FTC Disclosure – I bought this book. 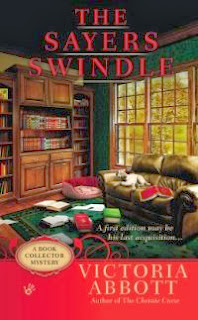 The Sayers Swindle by Victoria Abbott

Jordan Kelly is delighted to make money tracking down rare and valuable mystery novels for her employer, Vera Van Alst, an avid collector and the most difficult woman in Harrison Falls, New York. But now her boss’s complete set of Dorothy Sayers is missing, and finding them may lead Jordan to a murder suitable for Sayers’s esteemed sleuth, Lord Peter Wimsey.

When Jordan manages to locate her boss’s missing books, they are in the possession of Randolph Adams, an elderly man in a nearby town. Offering a valuable Hemingway first edition as an incentive, Jordan thinks she’s about to seal the deal—but some of Randolph’s relatives think he should hold out for more.

Then the entire family disappears—and a dead body shows up. It’s up to Jordan to collect the clues—and make sure a killer gets booked. 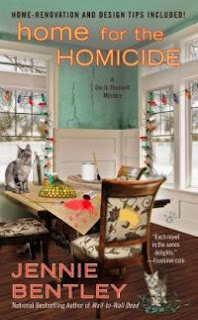 Home For Homicide by Jennie Bentley

Avery Baker was a big city textile designer, until she inherited her aunt’s old Maine cottage and found her true calling—home renovation. But she never expected her latest job would come to such a bone-rattling dead end.

For Avery and her husband Derek, renovating the Craftsman Bungalow was like stepping back in time. The quaint old home was just as its original owners had left it—from the beautiful butler’s pantry to the surprisingly exquisite ribbon tile. But it’s the attic that yields the most heart-stopping surprise.

In a discreetly hidden antique crate, Avery finds a clue to a decades-old missing persons case. As Avery works on the house and delves deeper into the sinister story, it becomes clear that someone very crafty wants the Craftsman home’s secrets to stay that way! 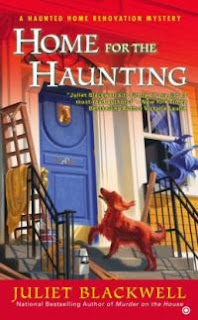 Home For The Haunting by Juliet Blackwell

San Francisco contractor Mel Turner is leading a volunteer home renovation project, and while she expects lots of questions from her inexperienced crew, she can’t help asking a few of her own—especially about the haunted house next door…the place local kids call the Murder House.

But when volunteers discover a body while cleaning out a shed, questions pile up faster than discarded lumber. Mel notices signs of ghostly activity next door and she wonders: Are the Murder House ghosts reaching out to her for help, or has the house claimed another victim?

Now, surprised to find herself as the SFPD’s unofficial “ghost consultant,” Mel must investigate murders both past and present before a spooky killer finishes another job. 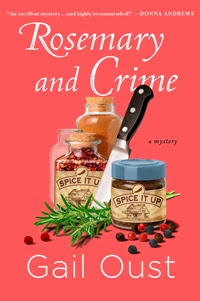 Rosemary and Crime by Gail Oust

Piper Prescott, a transplanted Yankee living in the South, has got her sass back. She might be down, but don’t count her out. “Change of life?” she asks. Bring it on. Recently divorced, Piper decides to pursue a dream she’s secretly harbored: owning her own business, Spice it Up!, a spice shop in her adopted hometown, Brandywine Creek, Georgia. But Piper’s grand opening goes awry when the local chef who’s agreed to do a cooking demo is found stabbed. Not only did Piper find the body, she handled the murder weapon and doesn’t have a witness to her alibi, making the case look like a slam dunk to brand new police Chief Wyatt McBride.

Desperate to uncover the truth—and prove her innocence—Piper enlists the help of her outspoken BFF Reba Mae Johnson to help track down the real culprit. The pair compile a lengthy list of suspects and work to eliminate them using their own creative brand of sleuthing techniques including stakeouts, breaking and entering, and one very unorthodox chocolate pie. When Piper narrowly avoids being a victim of a hit-and-run, she knows she’s getting closer to the truth, but can she catch the killer and clear her name before she becomes the next victim? Bailey’s Farmers’ Market is this season’s go-to holiday destination, but not all the vendors are feeling the Christmas spirit.

Jam and preserve maker Becca Robins is excited about the extra business that the Ridgeway Christmas Tree Farm is bringing to the market this holiday season. But when a competing tree farmer, Reggie Stuckey, arrives with a truck full of trees, angrily barking that he has exclusive selling rights at the market, Becca finds herself pining for more goodwill toward men.

After Reggie is found with a tree stake in his chest, she wonders when the Christmas tree business turned so deadly. Now Becca has to use the only clues she has to the killer’s identity—mysterious ornaments that begin to show up in her stall—to hook a sinister Scrooge who will go to any lengths to drive home a point.

You have just about blown my entire book budget for the first half of 2014!

Love your reports, Dru Ann, and think your new feature is wonderful!

So many new cozies to choose from. I wish I had the time to read them all. Thanks for the post Dru.