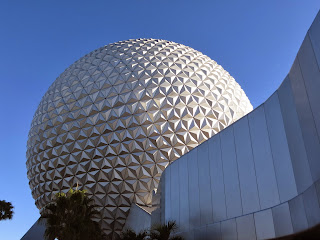 Guess where we just came back from?

If you said "The Disney Food and Wine Festival," you'd be right! And by the time this post goes up, there will only be three more days left to enjoy the event.

Held in Epcot, Walt Disney's Experimental Prototype Community of Tomorrow, the festival usually begins in late September and runs to mid-November. We went in early November last year but decided to get there a bit earlier (mid-October) this year. There were two benefits to the October week: better weather; and free Disney Dining.

Yes, we realize that by opting to take advantage of the "Free" Disney Dining Plan, we effectively lose our ability to find room discounts, but this year we gave it a shot. Gotta say, we thoroughly enjoyed every morsel.

On this plan, we were able to enjoy a sit-down dinner each of the four nights that we stayed. We also received a free "snack" (one each per day) and a free "quick serve" (one each per day). The snack credits could be used at the Food and Wine kiosks (woo-hoo!!!) and the quick-serve meals were about a thousand times better than I'd expected them to be. For some reason "quick serve" screamed hot dogs, hamburgers, or maybe a plate of fries with cheese poured over. Far from it. We used our quick serve meals for lunch. One day we had broasted chicken with mashed potatoes and green beans, with carrot cake for dessert. Another day we had tacos with beans and chips, with a lime popsicle for dessert. We were impressed!

Did we eat too much? Oh, yeah. But would we go back? In a heartbeat!

We've been lucky to take a few vacations in the  past couple of years. One of the things I particularly like about Disney is that it's so carefree. We know the parks well enough to navigate without thinking. We had Magic Bands this year that allowed us to arrange for FastPasses ahead of time (3 per day!), and the parks and hotels are always sparkling clean. Disney cast members go out of their way to make sure everything goes smoothly and when we've engaged a few of them in conversation, we find out what brought them to Disney and why they stay. It's great. It's relaxing. When we travel elsewhere, there's always stress. It's good stress, but it isn't carefree like a vacation to Disney is. We kicked back, chilled out, and - yes - ate way too much.

No idea if we'll be able to take the time next year, but I have to admit, I'm already excited about the possibility!

While I wouldn't say DisneyWorld is my favorite vacation destination, it really does have a lot going for it when we need to chill. Do you have a favorite place to relax?

Great post Julie, thank you! Glad you had a great time. I love food festivals and try new things. They don't always taste good, but most do.

Last year I tried herring at the Norway pavilion and ... ooh, ick! Didn't care for it one bit. But my dad always loved herring and I'd always refused to try it. I attempted the taste last year in his memory. This year, herring wasn't offered at any of the kiosks, so I'm glad I tried it when I had the chance.

The smell of herring alone is enough to make me run away. I think you ate it raw? In Holland you are supposed to pick the thing up by its tail, dip it in raw onions, tip back your head, and slide it down your throat, and take a bite. Horrible. The thought alone. But I did try it once fried, and that was edible.

I think it was raw. Eeeyoo, eeyoo! It came with raw onions, but I didn't realize I was supposed to slip it down my throat. I chewed. Ick, ick, ick!

Lol the seals and sealions love them. But if you ever come to Holland, I will show you very tasty Dutch foods and drinks :)

I love visiting Southern Vermont. Instant relaxation when we cross the border.