Welcome to Dru's Cozy Report: October 2013. This month we have three new series. The annual pre-Thanksgiving pancake-eating contest is a big event in Sugar Grove, New Hampshire. It’s sponsored by the Sap Bucket Brigade, aka the firefighters auxiliary, and the Greene family farm provides the syrup. But when obnoxious outsider Alanza Speedwell flops face first into a stack of flapjacks during the contest, Greener Pastures’ syrup falls under suspicion.

Dani knows the police—including her ex-boyfriend—are barking up the wrong tree, and she’s determined to pull her loved ones out of a very sticky situation. The odds may be stacked against her, but she’s got to tap the real killer before some poor sap in her own family ends up trading the sugar house for the Big House.

I had such a fun time reading this delightfully charming whodunit. In this new series, Dani is hunting for a killer in her attempt to clear her family's name and some loose animals in town. The author did a great job in this wonderfully-served mystery that had a nice pace as each chapter flowed from one to the another, never missing a beat as clues are presented to help us solve this puzzle. I love the humor between the pages and the engaging conversations throughout. Dani is a great protagonist, who I want to learn more about, surrounded by a quirky cast of characters who are just as entertaining as she is. I can't wait for the next book in this exciting new series.

FTC Disclosure - The publisher sent me a copy of this book, in hopes I would review it. I later read my kindle edition.
Murder and Marinara by Rosie Genova is the first book in the new "Italian Kitchen" mystery series. Publisher: Obsidian, October 2013 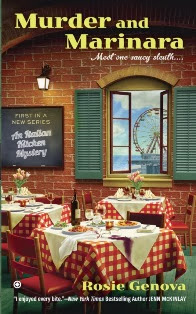 Hit whodunit writer Victoria Rienzi is getting back to her roots by working at her family’s Italian restaurant. But now in between plating pasta and pouring vino, she’ll have to find the secret ingredient in a murder.

When Victoria takes a break from penning her popular mystery series and moves back to the Jersey shore, she imagines sun, sand, and scents of fresh basil and simmering marinara sauce at the family restaurant, the Casa Lido. But her nonna’s recipes aren’t the only things getting stirred up in this Italian kitchen.

Their small town is up in arms over plans to film a new reality TV show, and when Victoria serves the show’s pushy producer his last meal, the Casa Lido staff finds itself embroiled in a murder investigation. Victoria wants to find the real killer, but there are as many suspects as tomatoes in her nonna’s garden. Now she’ll have to heat up her sleuthing skills quickly…before someone else gets a plateful of murder.

Have you ever been behind the scenes of a family restaurant? Well, in this new debut series, the author takes us there and let the good time roll as Victoria is gently forced to save the family business by any means necessary and if that means she plays detective like the character she writes, then so be it. I love the comfortable atmosphere of this story as every scene depicted made me feel like I was right there alongside this eccentric cast of characters lead by our heroine, Victoria with support from her BFF who adds comedic relief throughout this charming drama. With a nicely done plot, great conversations and a mystery that kept me entertained from beginning to end, this was especially enjoyable and I look forward to the next book in this appealingly fresh new series. Bonus recipes are included.

You can visit Rosie at www.rosiegenova.com

FTC Disclosure - The publisher sent me a copy of this book, in hopes I would review it. I later read my kindle edition.
Chili Con Carnage by Kylie Logan is the first book in the New "Chili Cook-Off" mystery series. Publisher: Berkley Prime Crime, October 2013 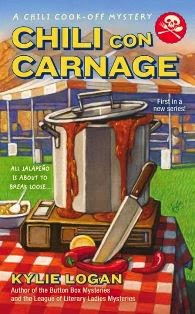 Bean there. . .done that

Romance is supposed to be the spice of life. But Maxie Pierce is so done with bad relationships—well, almost. She just has to get rid of the latest loser, Roberto. Besides, she has more important things to worry about. Her daddy, Texas Jack Pierce, king of the chili cook-off circuit, has been missing for nearly six weeks now. In his place, she must team up with her irritating half sister, Sylvia, to promote the family business at the Taos Chili Showdown, to be judged by celebrity chef Carter Donnelly.

But when Maxie discovers Roberto’s body in the chef’s trailer—only hours after publicly breaking up with him while wearing a giant red chili pepper costume—she suddenly finds she’s the one in the spotlight as the police pepper her with questions. Now this Chili Chick needs to kick up the search to catch the real killer and get back to finding her father.

This is a fun and humorous read where Maxie, our reluctant sleuth, starts an investigation when one of the roadie is murder and suspicions is cast upon her. What we have is a nicely executed whodunit that immediately entertains in this action-filled drama from the dancing chili to the apprehension of the killer. The author did a good job in keeping this mystery fresh and appetizing as we follow our spunky heroine who delighted me with her timely comedic escapades in her search for the truth. With a comfortable tone, the feel of being at traveling show, a group of eccentrically diverse characters and engaging dialogue, this was a wonderfully enjoyable read and I can’t wait to see what’s next up for Maxie and her friends.

You can visit Kylie at www.kylielogan.com

FTC Disclosure - The publisher sent me a copy of this book, in hopes I would review it. I later read my kindle edition.
And check out these other October releases

Ooh, lots of fun and interesting books this month. Thank you, Dru Ann.

For this month I have received Laura Childs - Postcards from the death (I read only paperbacks, not hardcovers), Kylie Logan - Chili con Carnage, Sofie Kelly - Final Catcall, and of course Ellery Adams' Poisoned Prose, which I loved. But Murder and Marinara is tempting me!