And with this happy little device, I've stepped into the 21st Century! 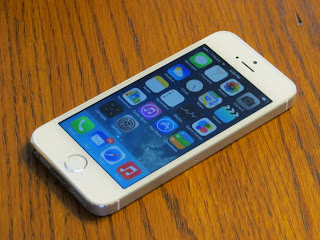 I can't believe how far we've come from those first boxy bag phones! My parents had one -- back when they were called "Car phones" and came in giant leather carry pouches. My parents tended to be early adopters when it came to technology and they got one for emergencies. I remember thinking how cool it was. And how amazing that people could talk on the phone away from home!

My husband and I came later to the party and we tend to hold onto our phones for years beyond our contracts before turning them in. Same with the kids. In fact, it wasn't until recently that we started to realize that flip-phones are passe. Who knew?

Our eldest daughter and her boyfriend convinced me to try a Mac when I was in the market for a new laptop a few years ago. Loved it. When my PC desktop fried, I replaced it with a Mac desktop. I've since acquired an iPad for travel, and now I have this iPhone to replace my almost-smart android phone. It's been less than 24 hours since I got it, but I'm loving this little device already.

My old  phone originally had FB, but I had to disconnect it because it stole someone else's FB photo and inserted it as my face in phone-generated-emails. Don't ask me to explain it - I can't. All I know is that there was no way to change the photo so I had to resort to eliminating FB from my phone. As of right now, it looks like this iPhone is handling all my tasks well. Fingers crossed!

Is there any technology that you're particularly thrilled to have? Anything that's surprised you?

Congrats and good luck! I'd really like to have one but I can't afford the data plans....:-(

Same here, Julie. All Mac, phone, iPad, computers. Our family was an early adopter of Apple from the very start. Superior technology. Great products. Enjoy. Taking photos & posting or emailing is SO much easier. Plus the sharing between products is too cool. My girls keep me apprised of new features.

I was surprised - my bill is only going up about $10 per month. I expected the data plan to be a lot more expensive.

I love how easy intuitive Apple products are. When I moved from PC to Mac a few years ago, I worried about a startup curve. I think it took me an hour to get comfortable with the new commands. Very happy!

I'm anxious to see how long it takes you to adjust! I've been wanting an I Phone for a long time, but very fearful of this new technology. I have the old black rotary phone that I used as a child still sitting in the garage. I figure after I'm gone my children might sell it at a hefty profit. I hear these phones are complicated so I'll be waiting to hear what you think!!! Congratulations on your new 'baby.'

So far, it seems pretty easy. I had to look up a couple of things online (recording my own ringtone, for instance), but otherwise, I navigate intuitively. I like playing with it and learning as I go, which is pretty much how I learned how to use a computer oh-so-many years ago. I got a little upfront instruction, and then I went off to play. I figure as long as I never hit a button that says "delete permanently" I'm safe!

Congrats Julie, my boyfriend has an aversion against Apple, so nothing Mac or I- here in the house. I am not much interested in the latest technology and gadgets, what I have just has to work as I want it to, or else ...