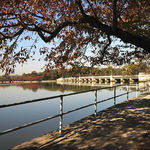 Above is a photo of a favorite spot of mine in Washington, DC---the Tidal Basin beside the Jefferson Memorial

I know the Farmers Almanac has predicted a colder than normal Winter for a lot of the country this upcoming winter season, but right now it's technically Fall or Autumn and it's definitely still Summertime in Virginia.  True, the temps are not pushing into the 90s any more, and that's just fine with me.  Here in Virginia and the rest of the East Coast, Mid-Atlantic, and the Midwest, Summertime also brings humidity---LOTS of humidity.  And I don't know too many people who like hot, sticky weather.  I love higher temps, but I've been spoiled by living in Colorado where we have heat but LOW humidity. 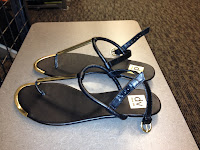 Last week was filled with booksignings which  I REALLY enjoy.  :)  I love meeting people and talking about books.  But there was also time for a Back-to-School Birthday Shopping excursion with my 15-year old granddaughter Natale.  We always head to two combined shopping centers in Fairfax, VA---Fair Oaks and Fair Lakes.  I wish developers wouldn't use almost-identical names for places.  It's
confusing.  :)   Anyway---we started out at Nordstrom Rack looking for shoes to go with her "birthday dinner" outfit.  Here are the cute ones we found. 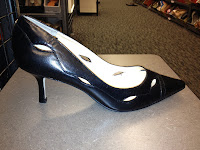 We also spent some time trying on the fancier grown-up high heels.  She'll probably be wearing them before I know it.  Kids grow up SO fast.  Here's a cute pair of Ivanka (sp?) Trump heels.  And we couldn't resist taking a photo of some shoes we dubbed "Cha Cha" shoes.  Daughter Melissa in Manhattan got the nickname of Cha Cha when youngest AnaSofia was 3 years old and couldn't pronounce Melissa.  She's been Cha Cha ever since.  Melissa is the shortest of the group, so she really does wear those tall high heels. 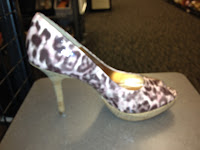 And here's a photo taken before we went to Natale's Birthday dinner.  Daughter Christine and Natale 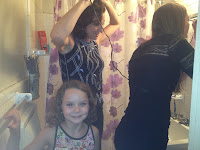 sharing a typical New York apartment-sized bathroom, fixing hair and makeup.
AnaSofia found no room, so she's heading back to the living room.  :)

Did any of you go on Back-to-School shopping excursions with kids or grandkids?  What caught their fancy.
Posted by Maggie Sefton at 12:00 AM

My stepdaughter was suddenly accepted in a "real" school for the very first time, at age 14. So I suddenly had to buy a schooldiary, a backpack, rainsuit, paper to coat her schoolbooks with, etc. I am apalled at how expensive everything is.
Still, I am very happy for her, it is a step in the direction of being able to live a "normal' live eventually.

I took my 18 year old grandson shopping this weekend. I like shopping with a boy as they go in pick out what they want and are ready to go. I am not a shopper and hate shopping with my daughter because she can spend hours trying on, putting back, getting something else, etc. Maybe is I had every been in a position of have lots of money or credit and could just shop[ without thinking primarily of the cost I might enjoy it more but I have always had to go shopping for something specific and not just for something to do. So it has always been more of.chore, rather than a pleasure.

Aurian---This will be a whole new world for her---and the family. :)

Lynn---I completely understand. Most of us shop with a budget in mind. Hopefully, you'll get the chance to shop for a special purchase sometime---and then you can splurge.m :).