Into the Woods and Near the River 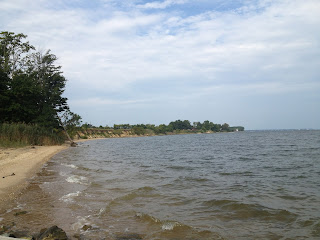 
This photo shows the Potomac River near the mouth, where it empties into the
Chesapeake Bay.

Right now, I'm no longer in Northern VA.  Monday of last week, I drove down into what 's referred to as the Northern Neck of Virginia.  When you look at a map of Virginia, it's the section of land that sticks out into the Potomac River.  The Potomac is wider at that point as it winds down to empty into the Chesapeake Bay. That section of land which extends is called the Northern Neck.  I'm staying at a really pretty house/cottage surrounded by woods on all sides and two blocks from the Potomac. I'm relaxing and burrowing into my revisions for the 3rd in the Molly Malone trilogy which will be out September of next year.  I promised my editor I would get this manuscript to her by the end of the month.  This July disappeared in conference travel and August was eaten up by all sorts of non-writing related and VERY time consuming business matters.  Life happens, as they say. 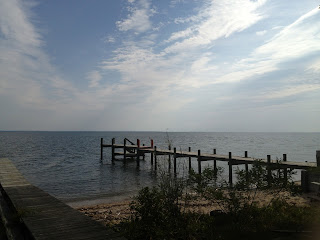 I'm told there's a large herd of deer that live in the woods bordering the property.  And a family of bald eagles live at the top of a tall tree in the woods across from the property.  I've already spotted several of the eagles soaring overhead.   All sorts of cranes, too, since we're SO close to  big, fast-moving water---i.e.  the Potomac---as well as numerous lakes and ponds.  I startled a beautiful Blue Heron as I drove down the wooded road to the area.  Lots of wildlife around, so you have to be careful along those wooded roads.  Deer can jump out.  Same thing happens in Colorado.

I've been sitting outside on the wide decks and the yard and working----while I watch the wildlife.  :)  I was delighted to hear all sorts of birds singing and chirping early in the morning, in a tree right beside the deck.  My favorite bright red Cardinals (Virginia State Bird) and I swear I saw an Oriole, yellow and black, singing away.  Brought me back to my childhood.

Have you taken a "restful" vacation or retreat lately?  Where did you go?  Birds?  Wildlife around?  :)
Posted by Maggie Sefton at 12:00 AM

This sounds great Maggie. I am leaving with my boyfriend in a few hours for a three day trip to Germany. Just us together, relaxing from daily life stress. I hope to see trees in fall color, although it is a bit early for that.

Beautiful, Maggie! I really enjoyed the pictures; I just read a manuscript about the Jamestown Settlement - written by a descendant - and your pictures helped me to see it. Sounds like you're in a very peaceful place. Hope it relaxes and centers you. I'm taking a peaceful vacation right now. My husband and I are staying in a cottage in Oregon - forest on three sides and ocean on the fourth. We both needed this time to unwind.

Aurian, have a wonderful time!

When I am not home, I am visiting my husband who is still recovering from his July hospitalization. I drive 50 miles each way when I visit him. the cats do not seem to let me sleep past 6am except one day a week they let me sleep a little later.

Rachelle21----Goodness, that's quite a little drive, over and back, and every day! My hat's off to you.

Lainehots---That sounds wonderful, too. :) I'm so glad you two are getting a chance to unwind. These restful lovely places are nourishing. You'll have to let me know how you like the book on the Jamestown, VA settlement. It was the the First permanent English settlement in the New World. As a historical writer (as well as mystery), I love history. Also, my mother's family first came to Virginia in the 1640's, so I'm naturally interested.