It’s celebration season at our house. Birthdays in May, June, July, and August. Plus, this year we’ve had the added celebration of Baby Girl’s high school graduation. Lots of excitement. Lots of cake. Lots of fun. 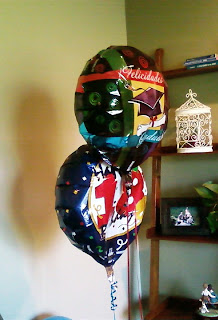 Take Baby Girl’s 18th birthday and graduation balloons for examples. They've been floating limply around the family room for weeks. Weeks. Not quite deflated but far from their once perky selves. It’s long past time for them to...go.

So I’ve decided it’s time to ahh...put them out of their misery, so to speak. That’s right, I’m committing mylar murder. I do carry some guilt about this, mostly because those balloons represent big events and seeing the balloons go means closure on those events (and I’m having issues with these big milestones). But, not so much guilt that I’m going to put the scissors away and let them naturally shrink away.

I will, however, cut them nice and neat and tuck them away in Baby Girl’s overstuffed baby book.

Now tell me...am I the only one who commits mylar murder? Or do you let your balloons naturally fade away?

Oh, and by the way, Thursday was son #2’s birthday, so there are even more balloons in the house. I’m keeping a careful eye on them...and keeping my scissors handy. Mwa-ha-ha.

Posted by Heather Blake Webber at 12:10 AM

A few years ago, I was given a mylar balloon for my birthday. It was eyeore, who is my favorite. He slowly fizzled as well. There is nothing creepier than a semi-deflated eyeore floating around in your bedroom. So being the evil mom I was, I took the point of a meat fork and stabbed that sucker. He is now pinned on my wall so the girls (16 and 14) know that I still haven't thrown him away. You are not the only one to murder a mylar balloon. ;)

I get balloons so seldom that I let them deflate naturally. I usually anchor them in one place so they don't float about the house. I then fold them and put them away for memories.

Lady Vyvian, I like keeping them for the memories, too. It's a sweet reminder.

Usually, I don't have to. The mylar murder is usually done by one of the kids or the cat.

No, you are not the only one! *LOL* It's the only way to get them to finally deflate! I'm like you.... I do that so I can save them because of the occasion! It's the Mylar thing to do! :)

Yes, it has been a long time since we had any mylar balloons here and it happens so seldom that I let them die a natural death. I heard that you can get them refilled.

Gee, I haven't had balloons in such a long time. But when I did get them, I always commit mylar murder. There is nothing creepier than a balloon floating around lazily while watching the latest horror movie with your husband!

Holly, my kids would keep them *forever*. LOL. I might have to borrow your cat.

Sharon, they're great mementos, aren't they? And don't take up too much space, either. I'm all about downsizing these days. :)

Elaine, I didn't know about them getting refilled. That's good to know--they can be pricey when you buy a lot of them.

One day my husband bought me a Red Sox mylar balloon. I loved it, Merlin liked it too, he would grab the string and walk around the house with it. Like you said, they last a LONG time. One day he was walking around with the string in his mouth and he wanted to change how he was holding it, so he used his paw higher up the string and pulled it down. It bopped him on the head and he ran like his tail was on fire. Ever since that day if we get or give someone in the house a mylar balloon we have to hide it, he freaks out and runs from them. :) just a cute little true story.

LOL, Cyndy. That *would* be creepy.

This happened when he was about 5 years old, he's 15 now.

Sue, since Christopher Robin reattached Eeyore's tale with a pin, he already has a history with sharp objects.

When my own Baby Girl was living at home, she took care of those herself. One poke with a pin, and she could flatten them neatly. Then she'd Sticky-Tac them to her bedroom wall to become part of her eclectic decoration. I just fold them away in memory books/drawers/whatever.

I was going to pipe up to the say the exact same thing as Elaine. That, yes, you can get them refilled if you carefully empty them. Kinda fun and cool as far as reusing the generic "happy birthday", character ones, etc and, as you said, Heather, it absolutely saves money.

I think we had gotten a cool one refilled once, but it was a long time ago. we haven't had any around in a long time!

Laine, the pin never seems to work for me. I always resort to the scissors. Love adding them to the decor. :)

I definitely need to try this! Especially this time of year. :)

Balloons are not a big thing here in Holland, I personally never have bought or received one. Sure, for a children's birthday we blow up those cheap ones, but they die soon, or are indeed killed the next day when the decorations are removed again.
I think one of the places where you can buy them (or could) is the hospital.

For my 40th birthday, someone gave me a mylar balloon with the Grim Reaper on it. I was sitting in a chair one day and it was slowly floating across the room toward me. Not what you want to see coming at you. That sucker HAD to go.