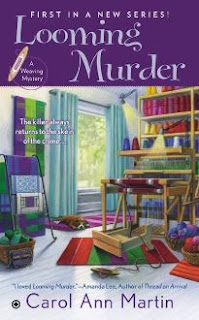 Della Wright has come to peaceful and picturesque Briar Hollow, at the foot of the Blue Ridge Mountains, to realize her lifelong dream of owning a weaving studio. To promote her new business, Dream Weavers, Della is offering weaving workshops for all levels of ability. In her first class, she meets half a dozen of the town’s colorful characters, who seem as eager to gossip as to learn how to work a loom.

But when a shady local businessman is found murdered, Briar Hollow suddenly appears a lot less idyllic. And when one of her weaving students is suspected of the crime, Della can’t help getting entangled in the investigation—with some help from her criminologist friend, Matthew. But can she weave together clues as well as she weaves together yarn—and stop a killer from striking again?

We are introduced to Della Wright whose recent move to Briar Hollow to open up her own small business is marred when one of her students is accused of murder. Believing in her heart that he is innocent, Della, despite warning from her friend stumbles upon clues that cast some negativity on her new neighbors. With help her friends, Della will have to untangle a few pieces of yarns before the binding is wound tight.

This is a great debut series. I love the tone and friendliness of the story. The mystery was good with plenty of suspects and a few twists to keep you caught up in the action throughout this lighthearted drama. Della is very likable as are her friends who are quirky with their own idiosyncrasies that make this delightfully charming. The author did a good job in keeping me vested in this nicely woven story and I look forward to the next book in this engaging series which is a great addition to the cozy genre.

Carol Ann is the pseudonym of Monique Domovitch and you can visit her at www.moniquedomovitch.com

FTC Full Disclosure - The publisher sent me a copy of this book, in hopes I would review it.
Mayhem at the Orient Express by Kylie Logan is the first book in the new "League of Literary Ladies" mystery series. Publisher: Berkley Prime Crime, June 2013 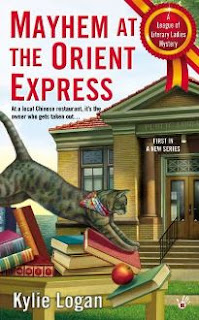 Most folks aren’t forced by court order to attend a library-book discussion group, but that’s just what happens to B and B proprietor and ex-Manhattanite Bea Cartwright, hippy cat lover Chandra Morrisey, and winery owner Kate Wilder after a small-town magistrate has had enough of their squabbling. South Bass, an island on Lake Erie, is home to an idyllic summer resort, but these three ladies keep disturbing the peace.

The initial book choice is Agatha Christie’s Murder on the Orient Express, and that sets their mouths to watering. The Orient Express is the island’s newest Chinese restaurant. They might not agree about much, but the ladies all love the orange chicken on the menu. But their meal is spoiled when the restaurant’s owner, Peter Chan, has the bad fortune of getting murdered. Now, with Christie as their inspiration, the League of Literary Ladies has a real mystery to solve…if they can somehow catch a killer without killing each other first.

What a great concept. Three bickering women ordered to join a reading discussion book group and the first book they pick comes to life in their small island home of South Bass when they along with a fourth member find the body of their favorite restaurateur. A snowstorm keeps all the suspects in one place and the trio put on their sleuthing caps to expose a killer.

I love it. Kylie has created a wonderful new series with three strong and determined women who collectively make a great team, each keeping their own individuality. The writing was so good that once I started reading, I could not put this book down as I got caught up in the non-stop action between this eclectic cast of characters that was delightfully entertaining in their pursuit of a killer hiding in plain sight. The author did a good job with the mystery keeping me guessing with some interesting twists that I applaud especially the killer’s identity. This is an excellent beginning in this debut series and I can’t wait to see what literary road we’ll be traveling to next.

Kylie Logan is the pseudonym of Casey Daniels and you can visit her at www.caseydaniels.com

FTC Full Disclosure - The publisher sent me a copy of this book, in hopes I would review it.
You Cannoli Die Once by Shelley Costa is the first book in the new "Italian Restaurant" mystery series. Publisher: Pocket Books, May 2013 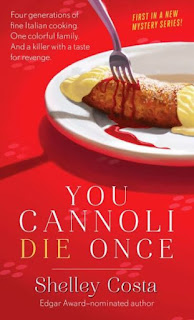 At Miracolo Northern Italian restaurant, one can savor brilliantly seasoned veal saltimbocca, or luscious risotto alla milanese, but no cannoli. Never cannoli. Maria Pia Angelotta, the spirited seventy-six-year-old owner of the Philadelphia-area eatery that’s been in her family for four generations, has butted heads with her head chef over the cannoli ban more than once. And when the head chef is your own granddaughter, things can get a little heated.

Fortunately, Eve Angelotta knows how to handle what her nonna dishes out. But when Maria Pia’s boyfriend is found dead in Miracolo’s kitchen, bludgeoned by a marble mortar, the question arises: Can a woman this fiery and stubborn over cream-filled pastry be capable of murder?

The police seem to think so, and they put the elder Angelotta behind bars, while Eve, sexy neighborhood attorney Joe Beck, and the entire Miracolo family—parenti di sangue and otherwise—try every trick in the cookbook to unravel a tangle of lies and expose a killer.

This is a fun read where chef Eve has to do some fast cooking if she wants to clear her grandmother's name and get her out of jail. Enlisting family and friends, this team will sift through all the clues to thaw out a killer.

I had such a good time reading this fast-paced and delightfully amusing whodunit. The mystery kept me guessing with its smattering of suspects and some twists that surprised me just before the killer was revealed. The antics and escapades Eve and her friends encountered in their search to free Maria Pia had me laughing. I love that the author took the time to develop this diverse cast of characters and I enjoyed their quirkiness which helped to get the job done. Eve is a great character and I can't wait to learn more about her and her family. This is an enjoyable read and I look forward to reading the next book in this engaging series. Bonus cannoli recipe included.

You can visit Shelley at www.shelleycosta.com

FTC Full Disclosure - I bought this book.
And check out these other June releases

I do have Mayhem at the Orient Express! So glad you liked it :) I also have Maggie Sefton Cast On, Kill Off, so I have to wait another year for this new book to be released in paperback.

Thanks Dru. I think the League of Literary Ladies is my favorite new series in ages. Can't wait for more.

These all look great, Dru Ann!

Ooh, I'll be checking out two of these. thanks, Dru Ann!