Memories Are Made of This

Last week we traveled to NYC to attend several performances of my daughter's most recent dance/performance art piece. Based on a German fairy tale about a strong young woman who defies the conventions of her time (in the 1800's), I was thrilled to see the show (titled Vulture Wally) two nights in a row. Amazing is all I can say. She (choreographer and performer)and her 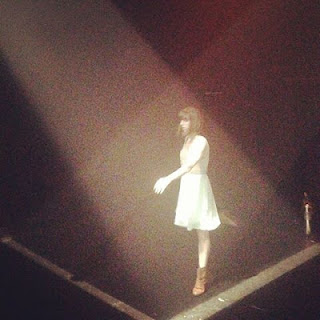 Not that it was easy getting there the first night. One of the reasons we left Texas was because of the weather--hurricanes in particular. So what happened the day we flew out? A tropical storm flew right along with us. We bumped through the sky and landed late afternoon. It was raining. Not awful rain, but raining. Still, we had plenty of time to get to the theater near Union Square after we checked into our Brooklyn hotel. Or so one would think. The taxi ride took longer than our flight and cost almost as much as one of our plane tickets. Never travel in NYC during rush hour on a Friday with tropical weather bearing down. You cannot move on the highways. You cannot get over the bridges. You sit and watch that meter in the cab tick higher and higher. We decided after we finally checked in to the hotel to take the subway back to Manhattan. We got out of the train station (with four blocks to walk) just as that storm hit full force. By the time we reached the theater (with 10 minutes to spare), both my husband and I were sopping wet. No umbrella can guard against horizontal rain. 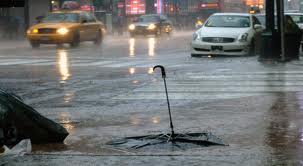 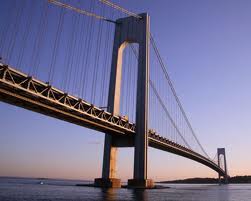 It was worth the trip. Just a magical, special show. Well after we had gone to bed back in Brooklyn hours later, my husband's sister and our two nieces arrived from Boston and my son and granddaughter #1 arrived from Seattle. We all met up at breakfast the next morning. Nice. We then saw my daughter and son-in-law's darling Brooklyn condo that sits a few hundred feet from the Verrazano Bridge.

Highlights? The performance, the family time, introducing my granddaughter to her first cannoli, her first chocolate crepes and playing 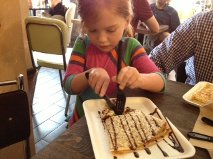 games like twenty questions to help her endure the subway rides. She was quite the little trooper. Her mom wanted her to go the Statue of Liberty and I loved her response over the phone. "I saw it from the Top of the Rock. I don't need to get closer." I was with her on that one! I also got to witness yet again what an amazing dad my son is. So happy father's day to him!

There were many other special moments but my favorite came on a subway ride. My granddaugher had to stand and as she hung on to the pole, she began singing a song in Japanese that she'd learned in preschool. Sitting right across from her was gentleman who suddenly cracked a huge, warm smile. See, he was Japanese.

Any memories you have of very special time with family and friends where things didn't always go perfectly--but still turned out wonderful?

I love moments like this. Did you let her twirl around the subway pole?

She did. The world was entertained by her on the subway!

Leann, You are blessed to have such a wise granddaughter, such a very talented daughter, and such a loving son who is a father.

It does sound as though "It was the best of times, it was the worst of times..." would be appropriate.

Thank you for sharing such a beautiful story.

Thanks Annette! It was a great little trip.

I still remember riding the subway in NYC after a Star Trek Convention. Very colorful characters riding that day!

Spring Break this year we took our two sets of twins to Disney World. Delayed flights, huge tropical storm and on the one day outside of the parks it was really cold (for us Tucsonans!) We braved out the storm in the the Magic Kingdom and were rewarded with short lines and the kids got to see the Country Bear Jamboree and the Hall of Presidents that we may have skipped otherwise. On the cold windy day, we went snorkeling with manatees in the Crystal River. Thankfully the river was warm and the manatees were friendly. It was definitely a great trip!! So glad your trip ended up so well!!

Sounds like you made some great memories, too JennDian! When our kids were little we loved the Country Bear Jamboree. :-)