Welcome to Dru's Cozy Report: May 2013. This month we have three new series for your reading pleasure.

Gluten for Punishment by Nancy J. Parra is the first book in the new “Baker’s Treat” mystery series. Publisher: Berkley Prime Crime, May 2013 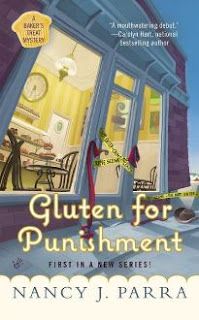 Gluten-free baker Toni Holmes may not cook with wheat, but when there’s a criminal on the loose, she’ll do what it takes to figure out who has their finger in the pie.

Even though Toni is used to going against the grain by preparing allergy-safe, gluten-free products for her online bakery, Baker’s Treat, opening a storefront in the middle of wheat country Kansas might be biting off more than she can chew. The town is already skeptical of her flour-free ways, but when a local wheat farmer is murdered outside her patisserie, skepticism turns into outright suspicion.

With the help of her eccentric grandmother, her handsome lawyer, and the sexy new widower in town, Toni is determined to find the real criminal before bad publicity and increasingly personal acts of vandalism shut her down. But when another suspect winds up dead, Toni realizes that this half-baked killer isn’t just trying to get her to close shop—he’s trying to make sure that she’s made her last gluten-free cookie…forever.

What a delightful introduction to the world of Toni Holmes in Oiltop, Kansas. Toni springs into action when a lone protestor of her bakery is later found dead outside its door. Aided by her feisty grandmother, the duo begins looking into the dead man’s life to see who wanted him dead.

This was a great read that I could not put down as I quickly turned the pages to see what happens next. I love the tone of the story and how it flowed from chapter to chapter. The author did a good job in keeping me on my toes with plenty of viable suspects; including some twists that gave me pause. I love the people that inhabit this small town in Kansas from Toni, her BFF Tasha; gutsy grandma Ruth and the two men who are after Toni’s heart. This was nicely done and gave me a better sense of celiac sensitivity. This is a sweet read that will whet your appetite for more in this pleasantly appealing series and is a welcome addition to the cozy genre. I look forward to the next adventures with Toni and her friends. Bonus recipes are included.

FTC Full Disclosure - The publisher sent me a copy of this book, in hopes I would review it.
Kneading To Die by Liz Mugavero is the first book in the new “Pawsitively Organic” mystery series. Publisher: Kensington, May 2013 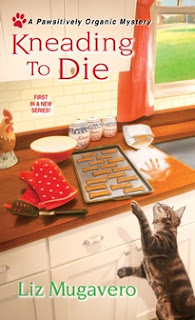 Maybe the best thing that ever happened to Kristan “Stan” Connor was losing her high-stress public relations job. Now there’s plenty of time to spend in her sleepy new Connecticut town working on her dream: baking healthy, organic pet treats!

Before long the neighborhood dogs are escaping their yards to show up at Stan’s doorstep, begging for the kinds of special homemade treats her Maine coon cat Nutty loves so much. And Stan’s pet-loving neighbors are thrilled with the new organic options available to their furry family members. But not everyone loves Stan and her newfangled organic ways...

It seems Carole Morganwick, the town vet, is from the old school of pet care. But when Stan swallows her pride and brings a very unwilling Nutty in for a checkup, she not only finds Carole dead under a pile of kibble…but also that she’s in the dog house as the prime suspect! Finding the real killer and clearing her name will require some seriously surreptitious sniffing around…and hopefully, curiosity won’t kill this innocent cat!

All she wanted to do is live a simple life in her new small town, but instead Stan is propelled into a murder investigation, especially when she becomes the prime suspect. Looking for clues causes some strife among neighbors and friends, but a girl got to do what a girl got to do to clear her name.

What a fun and exciting read. I enjoyed meeting Stan and getting some of her backstory interspersed throughout this lighthearted whodunit. It’s well-written and the tone is as comfortable as a cuddly baby kitten. The author did a good job in planting clues and red herrings that had me thinking twice about the identity of the murderer, which I didn’t see until it was too late. I love Stan’s internal dialogue, especially how certain situations referenced popular songs that help her get through the day. I also like that Stan is her own woman and won’t back down in her search for the truth. This is a good beginning with a cast of characters that includes some eccentrically quirky residents and good conversations in a small town setting and I can’t wait to read the next book in this endearingly pleasant series. 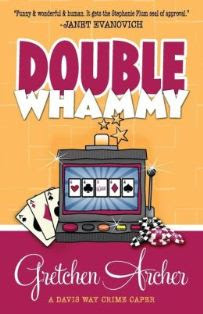 Davis Way thinks she’s hit the jackpot when she lands a job as the fifth wheel on an elite security team at the fabulous Bellissimo Resort and Casino in Biloxi, Mississippi. But once there, she runs straight into her ex-ex husband, a rigged slot machine, her evil twin, and a trail of dead bodies. Davis learns the truth and it does not set her free—in fact, it lands her in the pokey.

Buried under a mistaken identity, unable to seek help from her family, her hot streak runs cold until her landlord Bradley Cole steps in. Make that her landlord, lawyer, and love interest. With his help, Davis must win this high stakes game before her luck runs out.

Oh my goodness, what a riot of laughter I had reading the adventures and escapades of Davis Way. Landing the perfect job, or so she thinks, puts her in situations that were both amusing and intriguing as I watched her achieve her goal, that is until one dastardly incident and then the real Davis Way with unlikely help proves that she’s tougher than she appears. Surrounded by an interesting cast of characters exploding with southern charm, this was a fun read full of snarky and witty banter (especially her internal dialogue) that kept me entertained as I quickly turn the pages in a book that I could not put down. This is a great debut and I can’t wait for the next book in this engagingly appealing series.

FTC Full Disclosure - The publisher sent me a copy of this book, in hopes I would review it.
And check out these other May releases

Great little reviews Dru, and as usual, I do want them all. If only I had a money tree and more reading time ...

They all sound good. I put the second one on hold at the library and keeping my fingers crossed they buy that last one, too.

Thanks, they all look so good!