About five years ago, another author, Michael A. Black, and I wrote a book together. It came out the same time as State of the Onion, but where that first White House Chef mystery i a cozy, the book I wrote with Mike is absolutely not. 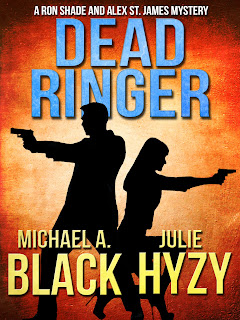 Both protagonists are based in Chicago, and Mike and I were in the same writing group at the time, so we started to write this book for fun. As we moved forward, we realized that it might actually, really, kinda turn out well. And I like to think it did.

Five years ago, it was published in hardcover and distributed mostly to libraries (if you're interested, check to see if your library carries it), but now -- finally -- it's been re-released as an e-book from Crossroad Press!

**If you're put off by coarse language or grim themes, you may want to avoid this book, but I think it's fun and exciting.**

Would I ever collaborate again? Not sure. The process certainly had unique challenges. But I'm very happy with how Dead Ringer turned out and I hope you are, too.

Alex was my first series protagonist and I think she's pretty cool.

Have you read any of the Deadlies?

Haven't read any of the deadlies yet. I just love the title State of the Onion, think I'll find that one first.

I love your White House cozies and I just found about the Deadlies...those are next on the list! I have to admit, they do look interesting!

I hope you enjoy State of the Onion. That one is pretty cozy!

Thanks, Cynarra! Hope you think they're fun. I definitely had fun writing them!

Yes I have read all the deadlies and I'm looking forward to reading this one.

Ohhh yes!!! I've read Deadly Blessings, Deadly Interest and Deadly Short Stories. My notebook comments are "loved it!" and "wrote Amazon review". I remember your asking your fans once if we wanted to see more of Alex and that's when I first discovered this series. Julie, I've read EVERYTHING you've written, I think: White House Series (one of my most favorite series), Grace Series (what I think is your more cerebral series...hoping that comes across as a compliment!) your Deadly Series (I need a non-cozy now and then) and your N.C.Hyzy's (my comment there is "fun fast reads; she's great") You can tell I'm a big fan. I'll order Dead Ringer now. I'm NEVER disappointed in your writing. Hoping all is well in your world. Best to you..Adrienne in MN :-)