Welcome to Dru's Cozy Report: April 2013. This month we have three new series for your reading pleasure. 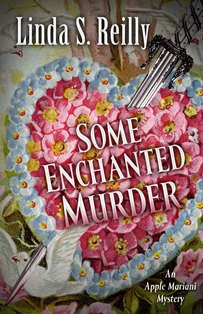 
Paralegal and title searcher Apple Mariani is accustomed to solving mysteries—mysteries such as lingering liens and missing heirs. But when appraiser Lou Marshall is stabbed with an antique dagger at an estate sale‚ she finds herself plunged into the heart of a murder. For starters‚ she learns that the victim had entrusted her with a decades-old valentine minutes before he was killed. Then Apple’s Aunt Tressa—the victim’s new squeeze—is pegged as a prime suspect‚ and their elderly friend Lillian goes suddenly missing. Was Lillian kidnapped, or worse, because she witnessed the murder?

Despite the local police chief’s irritating lack of concern, Apple is sure her friend is in trouble when a cryptic call from Lillian’s cell phone awakens her late at night. Still haunted by childhood memories of her own mother vanishing, Apple is determined to find Lillian before it’s too late. From the shelves of a local antique shop to the culinary horrors of the grungiest diner in New Hampshire, Apple and Tressa collect a series of clues that seems maddeningly unrelated. But time is running out, because a desperate killer—a killer bent on keeping the truth buried in the past—is still walking free.

We are introduced to Apple Mariani and her Aunt Tressa in this delightfully charming debut series. This is a great read in this well-written drama where the mystery kept me glued to the pages as I had to know what was going on. The author did a good job with developing the flow of the story that never wavered from the beginning to an ending that I can’t wait to see how it is explored in the next book. There were plenty of suspects; a couple of surprising twists and it was fun watching Apple and Aunt Tressa narrow the list down while putting the pieces together that lead to the apprehension of a killer, one that was hidden in plain sight. Apple and her Aunt Tressa are wonderful characters surrounded by a great secondary cast. The dialogue was witty and fresh and the atmosphere warm and friendly. I’m so thrilled for this series and I look forward to more exciting times in Hazelton, New Hampshire. 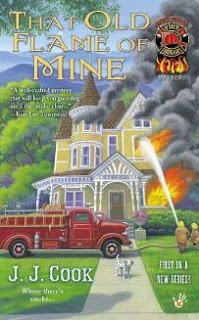 
After knocking the lights out of her boyfriend when she catches him cheating on her, Chicago fire fighter Stella Griffin hops on her Harley and heads for Sweet Pepper, Tennessee, where she ends up becoming the small town’s fire chief. When her dear friend Tory Lambert dies after her gingerbread-style house is set ablaze, Stella suspects arson and foul play.

As Stella investigates, she gets help from a most unlikely source—the ghost of Eric Gamlyn, Sweet Pepper’s old fire chief. And if that isn’t enough to rattle her, attractive police officer John Trump seems to have taken an interest in her. But Stella’s got to stay focused if she hopes to smoke out a killer before her own life is extinguished.

This is a great start to what I hope is a long-running series featuring fearless and intrepid heroine, Stella Griffin. Someone doesn’t want Stella and her team to pursue their arson investigation and it will take Stella and an unlikely ally to smother a burning flame. The author did a great job in keeping the story lively in this page-turning whodunit that flowed easily from one chapter to the next leading us to a hot finale. I enjoyed watching Stella follow the little nuggets of clues while discovering a long lost secret. This is an enjoyable read with a terrific cast of characters led by Stella, set in the comfortable atmosphere of a small town setting. This is a firecracker of a story and I look forward to more exciting adventures with Stella, her fire brigade volunteers and the people of Sweet Pepper, Tennessee.

J.J. Cook is the pseudonym of Joyce and Jim Lavene and you can visit their website at http://www.joyceandjimlavene.com/ or jjcook.net

FTC Full Disclosure - The publisher sent me a copy of this book, in hopes I would review it. 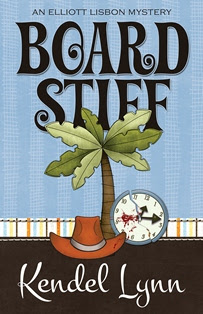 
As director of the Ballantyne Foundation on Sea Pine Island, South Carolina, Elliott Lisbon scratches her detective itch by performing discreet inquiries for Foundation donors. Usually nothing more serious than retrieving a pilfered Pomeranian. Until Jane Hatting, Ballantyne board chair, is accused of murder. The Ballantyne's reputation tanks, Jane's headed to a jail cell, and Elliott's sexy ex is the new lieutenant in town.

Armed with moxie and her Mini Coop, Elliott uncovers a trail of blackmail schemes, gambling debts, illicit affairs, and investment scams. But the deeper she digs to clear Jane's name, the guiltier Jane looks. The closer she gets to the truth, the more treacherous her investigation becomes: a brutal attack on her own suspect and the murder of a witness. With victims piling up faster than shells at a clambake, Elliott realizes she's next on the killer's list.

This is an engaging read that grabbed my attention from the start with Elliott’s desire to prove Jane’s innocence and to best the lead detective by being one step ahead and it’s those encounters that made for a fun read as Elli’s discreet inquiries landed her in one mishaps after another in the pursuit of a killer.

The author did a good job in delivering a well-written whodunit that was entertainingly pleasing. There were plenty of suspects that kept me guessing throughout most of this lighthearted drama and I loved how everything came together when I knew exactly who the killer was. Elliott is a wonderful character and I like the possibilities of more escapades with handling discreet inquiries for her employer. The added bonus of sexy Nick is a plus and I would love to see that relationship blossom. With witty banter, a likable cast of characters and a visually appealing setting, this is a great start to what I hope is a long running series. Note: Board Stiff is a humorous mystery with a sprinkle of spicy language.

Lots of great books to look for! I picked up the J.J. Cook book based upon your site and loved it.

Doesn't Elaine Viets have a book called Board Stiff also?

Looking forward to reading some of those cozies, thanks for the reviews Dru. I sure wish publishers would send me some to read and review ;)