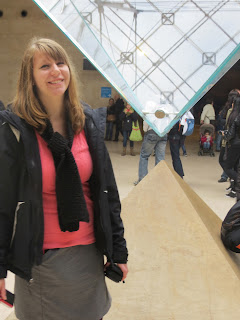 As promised, I'm sharing a few photos from Paris today.

Here's the thing: There is *no way* I would have ever expected to have gotten to Paris by this point in my life, let alone twice. My husband and I visited Europe about three years ago to celebrate a milestone anniversary, but we'd saved up for that trip for years.

This time, we went because our daughter, Biz, was out there to study. Her entire program is covered by her tuition and she's a smart cookie, so she has some significant scholarship money that makes her experience possible. I knew she would have a week off between Florence and London and that the study abroad program didn't cover that week. My panicked-Mom-ness kicked in at that point. We couldn't have her wandering around Europe all by herself, alone! Granted, we realized that she probably would have made some friends by then, but I also knew how much we'd miss her. And that's why we made plans to visit.

We definitely cut back (no weeklong guided tours, like last time), and thanks to our fabulous travel agent who spends our money like it's her own, we got a few really fabulous deals. I'm so glad we went. Despite the cold and the rain, we all had a really wonderful time. Lots of laughs and great memories.

In France we encountered pickpockets. The first time was a real eye-opener. We had just boarded the #4 Metro line. Very crowded. We couldn't get much past the first pole near the door. While the doors were still open to allow other boarders, a man got off, turned around and pointed squarely at a young girl standing at the pole between me and my husband. She couldn't have been more than 14. He shouted at her in angry French, speaking so quickly that the only word we could make out was "Pickpocket!"which he repeated several times, never shifting his glare.

The girl stood perfectly still, acting (it seemed) as though she had no interest, no concern with this guy at all. Gotta say, her eyes were strange. Dead, almost. She didn't move, didn't flinch. She just stood there, taking it.

When the train moved again, we all held tight to our valuables and kept a close eye on this girl. At one point she put her hand on our daughter's back. Biz whipped around to face her and the girl's hands shot straight up, as if to say "I didn't do it." 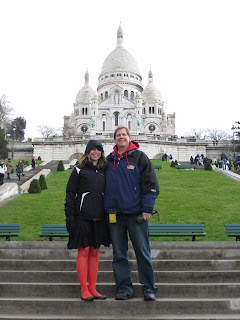 Later, at Montmartre, we were accosted by "students" asking us to sign a petition. We declined and kept walking. One of the young woman hustled after our daughter (she must look like an easy target) and grabbed her by the arm, her other hand reaching for Biz's pocket. Our daughter is a very polite person, as a rule. Always nice, always takes the high road. This time, she shoved the "student's" hand away and shouted, "Don't touch me!"

The girl got the message and she sulked away, muttering what were probably curses under her breath.

I don't want you to get the wrong impression though. Almost everyone we encountered in France was nice to us. I'd heard before our last trip that French people don't care for Americans. That was absolutely not our experience, this time or last. Everyone was friendly, happy to help us, and smiling. We never felt anything but welcomed. The fact that we "met" pickpockets was just the luck of the draw. We were warned in every city about thieves and we did our best to be careful. 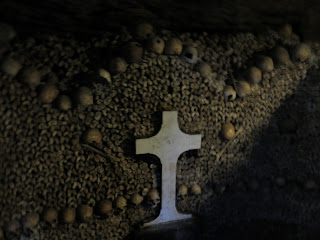 Paris was a blast. We truly enjoyed ourselves and we managed to see a few favorites from last time, and add in a couple of new experiences this trip.

One of the sites we visited was at the Catacombs of Paris. Incredible. There are six million people buried in these catacombs and the skulls are used as eerie decorations.

We weren't allowed to use flash photography in the "Empire of the Dead" but they encouraged us to take pictures and most of them turned out amazingly well.

Hope you enjoy the "tour!"

Awesome trip Julie! And yes, Paris is infamous for its pickpockets. I was almost the victim of one on the steps of the Sacre Coeur. I was making a photograph so raising both arms, and he tried to steal my wallet out of my purse. But I cought him redhanded, and he threw my purse to an accomplish, who of course acted like he had nothing to do with it. So I got it back. Spending the day in Paris without money is no fun at all.
From Holland it is a six hour drive, so it is possible to do "a day in Paris" but it has been over 20 years since I visited.

What a wonderful trip. You are so lucky you can go to these places. I would love to go to France as I am of French Decent. The closest to that culture that I have been to is Quebec. All my ancestors came over to Canada in the 1600's. At 76 I guess I'll never get to France now. I hope none of them were pickpockets.

Oh my goodness!! You were double-teamed! The girl on our train was with another, slightly older young woman, but the two behaved themselves until they got off at the next stop. I'm sure they preferred being on a train where they hadn't just been called out.
You were so lucky to get your purse back. Wow. And the nerve of the guy! So bold! The "students" in the Montmartre area were on the steps to Sacre Coeur as well. Busy spot!

We've never been to Quebec, but we've been hoping to go. I've heard it's beautiful. It's on our bucket list! How great that you're able to trace your ancestors back that far. And I'm sure they weren't pickpockets! LOL

Julie: I just heard that all of the workes at the Louvre quit and they shut it down. THe employees were protesting the lack of help with the pickpockets!
Sharon Crozier

Oh my gosh, talk about timing!!!

I'm originally from Philadelphia, where you learn to hold your bag not the handles even on the subway. One winter, a man reached through an open window and tried to grab my purse. Since, I was holding it, he could not grab it and my friend grabbed his hat. We told the workers at the station where we got off. I usually do not take my eyes off my bag especially in supermarkets.

While waiting for an RX for my husband at Walmart, another woman commented that the lady in front of her was not from a city as she turned away from the cart that had her bag in it. We had a shared fist bump.

It is hard to think of you as the mother of someone in college, you look so young in your picture!