I truly believe everything happens for a reason. My kitten Marlowe, whom I have talked about so much on Facebook, has proven this to me once again. If you don't know Marlowe, let me summarize our journey. 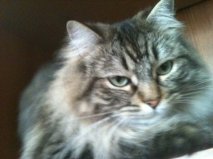 I adopted him mid-January and was looking for a specific temperament because my other cat, the silver tabby Wexford, is very shy and very attached to me. He hides when people come to visit and when we picked Wexy up after leaving him at the kennel during our Christmas trip, he was completely depressed. He hadn't even groomed himself and I could tell he'd lost weight. If we were to travel at all, I knew he could use a friend. But I needed a little "alpha" to his very obvious "omega." When I found Marlowe, I felt he was exactly the right fit. 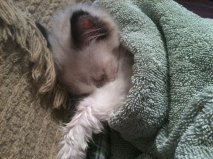 But less than a week into Marlowe's homecoming, he began to have seizures. I rushed him to the vet and the news was not good. He had a very big infection, but because he had already had his first kitten shots, antibodies would show up for anything that fit his symptoms. They couldn't tell exactly what was causing the problem and put him on antibiotics and seizure medicine. I nearly lost him 3 times in the two weeks that followed even though the seizures stopped. That darned infection proved a big enemy for a 2 pound kitten.

Fast forward to now. He is closing in on 5 pounds, is still on antibiotics and seizure medicine, has some developmental delays, but he is fighting. We are fighting. His white blood cell count, which measured an unbelievable 60,000 when first done in January is now closing in on normal. Still too high at 22,000 but whatever we are doing, it's slowly working. Love, of course, is the intangible ingredient. He is so loved.

He's helped me so much, too. Living in a rental house with all my belongings packed away for the most part and being in a strange new environment was getting to me. That and dealing with the slow pace at which my husband moves when it comes to getting things done--like starting our new house. Caring for Marlowe has been just what the doctor 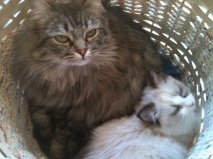 ordered for me and--oh, yes--for Wexford, too. He is the best big brother ever and their personalities are a wonderful match. When we go to visit my daughter in June, I know that kennel stay will be far less traumatic.

So, what do you think? Will Marlowe give Maru a run for his money? :-) 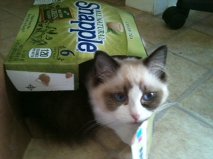 Thank you for this update on Marlowe. I've thought of him often since you first mentioned him on Facebook. He is so incredibly lucky to have you as a mom, Leann. Please keep all of Marlowe's fans informed -- we love your little fighter too.

Please do keep encouraging him. Your love and touch and cuddling and just your presence will make the biggest difference. To both of you. Sandie with the Fab 4.5

So glad to hear your little furbaby is doing well!! I remember when Phoebe got sick, poor Sadie had no idea what was going on. Then the one day we came back without her, Sadie was lost. Now we can't go anywhere without taking her with us. If I'm going to be gone for a while, I take her to a doggie babysitter so she isn't home alone. They are like our children, yes, but they are also like each other's brothers and sisters. Keep up the love and good work. I'm sure Marlow will pull through. He is so adorable. ;)

Thanks, all, for listening to me again. He may still have problems in his future, but he is really acting like a kitten now--like getting into trouble, sliding down the hall after toys and driving Wexford and Rosie the dog crazy at times, but we are all happy he's here.

It's amazing how these little balls of fur can become so huge in our lives. I'm glad things are working out. Give them a hug for me!

I am so glad for an update. I know I miss and worry about my two kitties when I travel. They definately become attached to each other. When my older Persian boy cat is sick (he's 9), my little Main Coon girl will lick on him and check on him (she's 3). She gets in trouble a lot and when I have to scold her, Scooter will lick on her and sit beside her. It is cute. Hope Marlowe stays on the road to recovery!

What a wonderful story, thanks for sharing. Glad to hear Marlowe is doing so much better. They are both beautiful kitties. Maru's got nothing on them!

Thanks everyone. I don't want to tire anyone by talking about Marlowe, but he is an amazing little guy.

Don't ever apologize for talking about Marlowe, Leann. It was my love for cats that first attracted me to your mystery series, and I've enjoyed keeping up with you ever since. It only took a second for me to fall in love with Marlowe and I pray for both of you often.