Monkeys on a Plane

Are you a good flier? Take to the friendly skies with a smile and kid-like joy?

I don’t need to be medicated or anything, but I’m a nervous flier. I have a prayer playing on a loop in my head from the time the plane taxis away from the gate to the time the wheels tuck back into their hidey hole under the plane. Then it starts all over again when there’s turbulence and when it’s time to land. 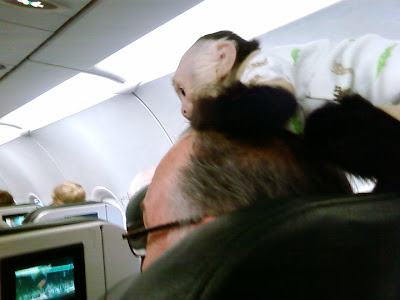 You’d think I’d just take a Xanax and relax a bit, but I prefer to be lucid in preparation of an air disaster.

Last week, I had four flights (are there non-stops flights anymore???), for a total of twelve hours in planes. I was extremely lucky—no problems at all unless you count the little kid behind me kicking my seat on the first leg of my journey. (Side query—do you confront the kicker or just let it be???).

But as I boarded the flight for the last leg of my trip, I was just ready to be home. I’d been up early, drove two hours to the airport in an unfamiliar city, it was late, and whine, whine, whine...

Then something special happened.

A soldier came on board WITH HIS PET MONKEY. Not only that, but they sat right in front of me. The little monkey hopped around, checking out his surroundings, including the man’s head sitting beside the unlikely duo (see pic). The man was such a good sport about it all.

I didn’t get the story of why the soldier had a monkey because I was too busy cooing over the monkey and being a big old geek when the monkey shook my finger. He was adorable in his little diaper and onesie.

The monkey is better than any anxiety medication. And of course, now I want a monkey (not going to happen, but still). Let’s just say that if every flight I was on had a monkey then I’d be one happy flier...

I'd be delighted to see a monkey on a plane! Just the picture made my day--the incongruity of seeing a man on a plane with a monkey on his head. So calm. No big deal. Ho hum. I love it!

Very cute. Before my husband and I were married he had a monkey. He left the monkey with me when he went on spring break once (I had to work.) Monkeys smell. They REALLY smell. It's not like a cat who washes himself. (Oh, and they bite, too.) So, though I love all animals, I'd never had a monkey. And YES, the kicking thing. I was on a non--stop flight to Seattle--a LONG flight--and I had a major kicker behind me. Her mother brought no toys, no snacks, no nothing. It wasn't her fault the only entertainment she had was to kick my seat. Grrrrr. And yes. Confront or not confront? I don't know!

Perhaps the monkey was Special Ops?

Kicker. I have said," You are disturbing me when you kick my seat. Please stop."
My college roommate's family had a monkey before people knew about diapers. He attacked her.
I wonder if the soldier's monkey was an assistance animal?

I used to work in a job where I did a great deal of flying. And I have been on flights with monkeys. Unfortunately, they were paying passengers and did not respond to instructions at all well. And none of them that I remember were as cute as the monkey in the picture.

Awesome! But also surprised that the animal was not in a carrier or such. You don't see cats or dogs in a seat.
And yes, do confront your kicker immediately. But well, I am the kind of person who tells a kid that whines and cries in the supermarket to behave and shut up. If the parents won't do it, I will. Manners can never be learned too young.