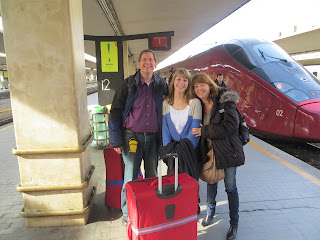 After Venice, we traveled by Eurostar to Florence where we met up with our youngest daughter. Biz had been studying there for seven weeks and we missed her so much!

She met us at the train station and over the next several days, showed us around the city. It was amazing and so cool to hear her conversing (roughly) in Italian and to see how well she knew her way around.

Because Biz still had classes to attend and finals to study for, we visited the Basilica of Santa Croce on our own. We'd been there once before, but very briefly. This time we had the opportunity to wander and take in all the amazing artwork (even though many of the frescos were in the process of being restored) and see the final resting places of people like Galileo and Michelangelo. 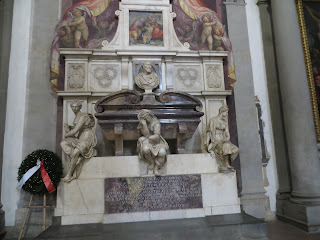 Biz's art class had a showing on the Wednesday night that we were there. It was wonderful to see how far so many of the students had come over the seven weeks. So much talent! The studio where the gathering was held was also where class had been held. From what we understand, the building dates back to the 1800s and is still occupied by artist-descendants from the original owner's family. 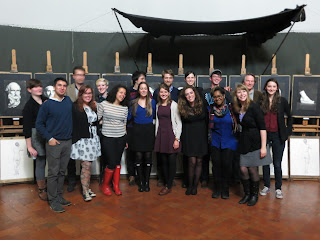 That night, after the showing, we went to dinner with Biz, her two roommates, one roommate's parents and the "house mom and dad" from where Biz had been living for the past seven weeks. Although they spoke very little English, we were  able to communicate and we had a wonderful time with lots of laughs. 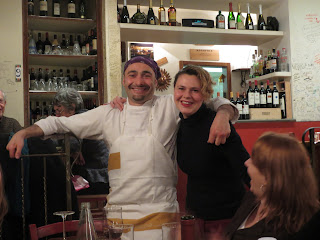 During the fabulous dinner (many, many platters of amazing food that just kept coming), the chef (pictured, with our waitress) came out to announce the new Pope. We had a bit of a language barrier - "Jesuit" didn't translate precisely, but eventually the house mom, Gabriella, understood. "Ah... Jez-weet-eh (phonetic)!" she exclaimed. The pronunciations were so close, yet so far, apparently.

There are some evenings that are absolutely perfect. This is one I'll always cherish.


Next week... Biz's spring break, and we're off to Paris!

Gorgeous pictures, and it sure sounds like you all had a great time. Looking forward to the next episode :)

We had an absolutely wonderful time. Of course, we can't wait to go back now!