Welcome to Dru's Cozy Report: March 2013. This month we have three new series for your reading pleasure. 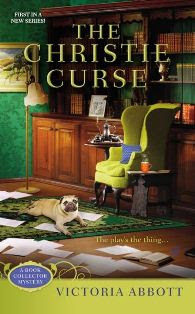 Jordan Bingham needs a new job and a new place to live. She’s back in Harrison Falls, New York, living with her not so law-abiding uncles, in debt thanks to a credit card–stealing ex and pending grad school loans.

Enter the perfect job, a research position that includes room and board, which will allow her to spend her days hunting down rare mysteries for an avid book collector. There’s just one problem: her employer, Vera Van Alst—the most hated citizen of Harrison Falls.

Jordan’s first assignment is to track down a rumored Agatha Christie play. It seems easy enough, but Jordan soon finds out that her predecessor was killed while looking for it, and there is still someone out there willing to murder to keep the play out of Vera’s hands. Jordan’s new job is good…but is it worth her life?

I love the concept in the new debut series of a missing play that could have been written and the search for it. Enters Jordan who needs this job and will do most anything to keep it. I love that her nefarious uncles are there to lend assistance in a law-abiding sort of way that helps Jordan as she becomes involved in a murder, assault and thievery. The author did a good job in teasing us with clues that included a few surprises that I did not see coming not even when the killer’s identity was revealed. Love it! Jordan is a great heroine surrounded by a quirky cast of characters that I want to know more about. I love the two main inhabitants of the Van Alst mansion and I look forward to what I hope is a long running series. Bonus recipes are included and be prepared to have your appetite whetted.

FTC Full Disclosure - The publisher sent me a copy of this book, in hopes I would review it.
Murder By Chance by Pat Dennis is the first book in the new “Betty Chance” mystery series. Publisher: Forty Press, March 2013 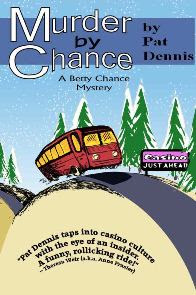 Can three scrappy, single women of varied ages find happiness in a new travel business specializing in casino junkets? All bets off when Betty Chance finds a body in a tour bus that arrives at the casino hotel. At fifty, Betty is unemployed, divorced and penniless, but with her stunningly beautiful niece Lori, she opens Take A Chance Tours, a Chicago-based company specializing in gaming destinations.

Betty quickly becomes close friends with Tillie, the perky, effervescent bus driver who happens to be an ex-con. As soon as the tour bus arrives at Moose Lake Bay Resort and Casino in northern Minnesota, Betty and her driver Tillie, discover a dead body in the locked bathroom of their motor coach. The 350-pound corpse is riddled with stab wounds. With Tillie and Lori's help, Betty puts her amateur sleuth ability to work and searches for the killer.

This is an engaging romp where slots are ringing and murder is served buffet-style. With a good start, this book picks up speed as the duo team of Betty and Tillie with Lori bringing up the rear travel to Moose Lake Bay casino where someone is trying to implicate them in a series of misdeeds. Using skills Betty learned while married to a cop and using skills Tillie learned in prison, this duo is unstoppable and not even a chase, which was hilarious, and a million bucks will deter their efforts in catching a killer. A good read and I'm looking forward to the next road trip with Take A Chance Tours. 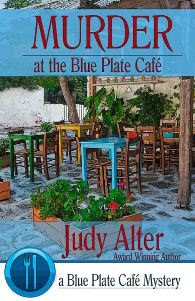 When twin sisters Kate and Donna inherit their grandmother’s restaurant, the Blue Plate Café in Wheeler, Texas, there’s immediate conflict. Donna wants to sell and use her money to establish a B & B; Kate wants to keep the Café. Thirty-two-year-old Kate leaves a Dallas career as a paralegal and a married lover to move back to Wheeler and run the café, while Donna plans her B & B and complicates her life by having an affair with her sole investor.

Kate soon learns that Wheeler is not the idyllic small town she thought it was fourteen years ago. The mayor, a woman, is power-mad and listens to no one, and the chief of the police department, newly come from Dallas, doesn’t understand small-town ways. Worst of all, blunt, outspoken Donna is not well liked by some town folk. The mayor of Wheeler becomes seriously ill after eating food from the café, delivered by Donna’s husband, and the death of another patron makes Kate even more suspicious of her grandmother’s sudden death.

When Donna’s investor is shot, all signs point to Donna, and she is arrested. Kate must defend her sister and solve the murders to keep her business open, but even Kate begins to wonder about the sister with whom she has a love-hate relationship. Gram guides Kate through it all, though Kate’s never quite sure she’s hearing Gram—and sometimes Gram’s guidance is really off the wall.

I like it. This evenly paced drama quickly became a page turner as I got caught up in the lives of Kate Chambers and her family and friends. The backdrop of the café played an important role in Kate’s determination in making a go of her new lifestyle while trying to solve the question of who killed her grandmother. The author did a good job in keeping me guessing with each clue leading closer to the truth with some surprises in store for Kate. This was a good read and I look forward to the next book in this pleasantly appealing series. Bonus recipes are included.

FTC Disclosure – I bought this book.
And check out these other March releases

Thank you for your reviews., Dru Ann. You always introduce me to new series!

Great reviews! I'll be checking out a couple of these.

They all sound good! I wish that published would send me some books ;)
There are four from your pictures on their way to my home, and I am very much looking forward to reading them.

Thatnks, Dru. I've added a few of these to my "must read" list.