Me Watching Them Watching Her

This past Friday, my daughter, who is a performance artist in NYC, had a unique experience to offer the world via live stream and, without getting on an airplane, I got to watch it all--as did many New Yorkers who happened to pass by. It's called Rooftop Dance At the Window at 125--http://www.ustream.tv/channel/presenting-rooftop-dance-at-the-window-at-125

There is an archive on the site but we're talking durational art. Long. So I will describe what I saw. As I mentioned, it was live-streaming all day Friday--from 8 in the morning until 8 in the evening. My daughter was in a little black room, no bigger than a closet, with a window that looked out onto a busy NYC street. 12 other artists each have a day when it is their turn to produce a duration piece. 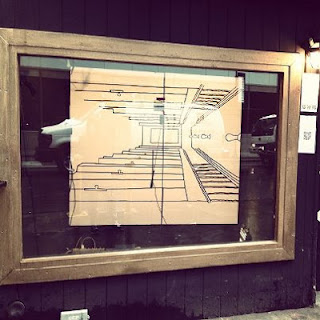 My daughter chose to fill the space with not only movement but by drawing  a unique mural on the three walls that the onlookers could see. She wore black and white stripes and slowly adorned the walls in black and white with what looked to be ladders and lightbulbs in perspective leading down and illuminating an imaginary floor below. At times you couldn't tell where she began and the walls ended.

As we all watched, she constructed the mural, taking great pains to measure, draw and tape sections of art to the walls--and interspersing drawing with dance and music and movement. And then, she carefully began to deconstruct what she'd created. I found this so fascinating because, as a writer, I construct a story, deconstruct it in an outline so I can write it, then reconstruct it on the page. It is the way of art, but until I watched what she was doing, I was never aware on a conscious level that this was what I was doing. The mother learns from the child. I like it.

I was completely fascinated by the people walking by who stopped to watch. For the most part, my daughter was emerged in her work and paid no attention. Many were fascinated by what she was doing, some seemed confused, some looked like stalkers (I was a little worried at one point) and then, toward the end of the day, there were these three guys. I couldn't hear their words but it was obvious they were making fun of what she was doing--at least if I read their body language correctly. What a metaphor. So many times, I feel as if other crime writers make fun of the cozy mystery. It's not "good enough." It's not "serious enough." It's "fluff." And yet we cozy writers smile and keep true to our work. Many of us offer the world great insight into that person next door who isn't quite trustworthy. It's all there between the lines.

What my daughter did in response to those three young men, who were apparently laughing at her, made me so proud. She made eye contact and she smiled. She interacted with warmth. They backed off--but then they came back. She struck the most amazing dance pose. To my eye it spoke of shyness, humility and a pulling inward. They left. She had touched them and made them think about their behavior without saying a word.

Awesome Leann, you have every right to be so proud!

And a note about the previous post: I guess now you really do see how many readers you have with all those comments. And that we all love pets in cozies.

I am going to take some time to watch as this is not the type of art one sees in a small town.

Just as I am not always a fan of my son's music, I, too, am thrilled he is a performer.

When they are happy--and my kids took very different paths--it is all okay. Somehow you gave your son the freedom to be who he is. That's so important!

That's awesome. That's great that she is doing something she loves, and she knows how to handle a groupe of 3 men who may have been idiots at first, but then had a change of thoughts. Very cool!

I saw a lot of people stopping to take pictures with their smart phones. It was an interesting thing to watch and if I'd been walking by--even if it wasn't my daughter--I would have stopped and just watched for a while. New York has so many wonderful experiences!

Thanks Cathy. Yes. We write "real" mysteries. Readers know it. It's just some other folks who have a problem. :-)

Leann, I am proud for you both. The fact that you have produced such a brave and talented woman....priceless. thank you for sharing. Take care and God Bless both of you.

Thanks so much Annette. She followed her dream. Sure I cried when she left for college, but when she packed up that U-haul for NYC I smiled bravely, waved goodbye and when she was out of sight I broke down. Creativity is a wonderful road but full of potholes of rejection and disappointment. I was scared. But I supported her 100%

thanks for spending the day with the cameras, mom! so lucky to have you (kiss kiss), you are THE best.

from the inside, it was a day of endurance and getting down to my own business (which involved lots of box-cutting, drawing and dancing).

and facing those three guys was a challenge. there was a lot going on with them... they were ball-busting each other and i became a topic of their conversation.

there was bit of oooo, there's a lady, and oooo, she thinks she's being so art-y. look at her.

so THAT was vulnerable for me.

i can understand why they poked fun. they didn't ask to be faced with dance while they're on the way to the bar. (such is the life in NYC)

and my dance wasn't specifically for them, but then they made it about them, which provided an interesting dramatic turn for me. i was hurt and pissed but ultimately they took me out of myself. (oh yeah, we'll hit this male gaze thing head on)

so i gave them some more dance that they didn't want to understand and looked at them while i did it. we didn't really come to any real understanding other than recognizing that we, from our two different worlds saw each other. then off we all went, back to what we were doing before.

oh, and honestly, i wished i would have told them off. but. well, ultimately it's just not how i operate.