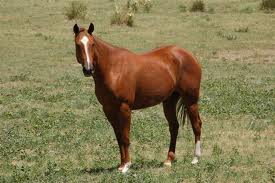 After my last Monday's post about my forthcoming trip to meet Magic, a people friendly, roan-colored quarter horse, some of you asked that I let you know the outcome.

As I wrote last week, I've had a passion for horses since I was a youngster, a passion many of you share, as it turned out. I'd ridden several times as a teenager, got bucked off the last time and landed on my neck, and have been a little shy of the beasts ever since. Okay, a lot shy. But after Linda, a new neighbor of mine, offered to take me with her to the stable where she boards Magic, I "manned up" and jumped at the opportunity.

We drove out to the country and turned in on a long gravel drive that led to the stables and indoor arena. The stables were just like I'd seen on TV, a long aisle with boxy wooden rooms on either side, each one holding a horse. I walked down the aisle reading the names posted on each door. Savannah was a particularly friendly black Arabian who let me stroke her forehead. There were breeds of horses that I'd never heard before, such as the Hanoverians, big German horses.

Each stable had a half door, a window in the back, a packed dirt floor with straw on it, and a feed bucket hanging from the wall beside the door. Magic's stable also had hoof marks on the end wall, and as I was soon to witness, when she doesn't get enough root beer barrels, her favorite treat, she has a slight temper tantrum. So right away I was afraid of her hooves. I also learned that Magic has a fear of plastic bags and will turn tail and run if she sees or hears one. Horses, Linda told me, are like big deer - very skittish.

Linda brought Magic into the aisle and used guide lines attached to each side of the bridle to keep Magic from wandering off. Linda handed me a brush and we both began to groom the horse. At first Magic was a little tense with someone new near her, but soon the brushing lulled her and she huffed her pleasure and half-closed her eyes. Linda even groomed her long, full tail, but other than feeling the texture of the tail (like thick human hair!!) I stayed clear of the rear end. Too close to those big powerful back hooves.

Then Linda led Magic to the arena and put her through some paces. Magic has been taught "dressage", which I learned is different from Western style training. I saw another horse being ridden in the dressage manner, and it was beautiful. Very graceful movements.

And then we were done. Linda said next time she was going to get me into the saddle.

I'm sweating already.
Posted by Kate Collins at 12:00 AM

What a wonderful visit! Dressage is beautiful, but I'm too messy to even want to try that! lol I look forward to hearing about your first ride! I had fun with my Harley this weekend-he's almost too smart at times.

This sure sounds like a wonderful day Kate. And Magic is beautiful.

I love dressage! I bought the dvd Miracle of the White Stallions just for the dressage in the movie. My horses were all ridden western, but I had one gilding who could be ridden either English or Western. He would have been a great horse for your first time. He understood a person's fear and would act like he was walking on eggs when a novice rider was on him. I put my 4 yr old daughter on him and she rode alone. You can do it Kate!!

So glad you got over your fears a little. You're being wise and not pushing yourself. Cannot wait to hear how it goes this week!

I wish I could try your horse, Sue. Magic shies easily so it won't take much to spook either one of us.

I'll have to wait to report on my ride, though. I'm flying to St. George, Utah, to do workshops at the Red Rock Writers Conference this weekend. Maybe next week I'll have a chance to saddle up!

Great idea, to have you help groom her.

Our daughter is a professional equestrian trainer and teacher (dressage and hunter/jumper). It's a tough job but she thoroughly loves it. Dressage is challenging for both rider and horse but it is so rewarding when it comes together. Good luck as you progress to becoming a horsewoman. It's amazing what these beautiful animals can do with you and for you!

What a great first step, you can conquer your fears. Horses can be so in tune with what you're thinking and feeling, so Magic will let you know when you're tense. So just relax and enjoy it and all those fears will go away.